The Race of Terrorism

Whenever there’s a mass shooting in America or the west, Muslims everywhere worry that the culprit might be a Muslim. If it’s a Muslim, he will be labeled a terrorist and feed the stereotype leaving true Muslims and their faith in a difficult position. True Muslims must deal with renewed fear and suspicion, a rise in hate crimes, and demands for condemning the shooter and his religion as though Islam condones such heinous actions.

If it is discovered that the shooter is Caucasian, then there’s no question about the person’s race, religion, or culture; instead, his violence is blamed on mental disorders or some similar issue.  The person is usually portrayed as “normal” by the media who find it “shocking” that such a person committed such a crime. This is all even though most mass shootings in recent years and the history of our country were done by white men and the FBI has labeled white supremacists groups the greatest threat to our nation.

Even white male shooters are found to have bigoted and violent beliefs such as the person who killed 9 black church goers, or the person who attacked an abortion clinic and killed several people, or even the one who killed 3 Muslims in their apartment.  The motives are minimized, the murderer is excused as mentally disturbed, or the problem is labeled the result of something completely different like a dispute of some sort. No such latitude is given to Muslims or their faith when a Muslim is found to commit a mass shooting even if the person was a domestic abuser, drug addict, vaguely religious, or even legitimately mentally disturbed.

Unjust generalizations like these end up demonizing and alienating wonderful people in our country, people who would rather mourn in the wake of such crimes along with their fellow Americans than worry that the shooter could be a Muslim. As an American and Ahmadi Muslim, the recent tragedy in Las Vegas hurt me and those in my community deeply and we share the pain of loss with our fellow Americans. We condemn this crime just as we have all other acts of wanton violence be they from Muslims or non-Muslims because Islam teaches that taking a life is like taking the life of all of humanity. Likewise, many Muslims come out after such tragedies to donate blood and help victims because the giving of life is like giving life to all of humanity.

Furthermore, such unjust generalizations allow for other problems to grow such as gun violence, mental health issues, and racism. If the rise in mass shootings and other issues highlighted are to be dealt with, they can’t be ignored because of the person’s race or assumptions made about it. 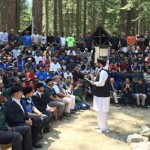