Patheos Explore the world's faith through different perspectives on religion and spirituality! Patheos has the views of the prevalent religions and spiritualities of the world.
Here’s an article from the Washington Examiner (as linked to by Drudge):  “Women are having fewer kids, and demographers don’t know why.”

The bottom line:  the fertility rate has been dropping dramatically in the years since 2007, from 2.1 to a current 1.86, and demographers are struggling to understand “why the decline in fertility has persisted even as the worst effects of the labor market have abated.”

One clear trend is that women are waiting until older ages to have children.  The article says:

Mark Mather, an associate vice president at the Population Reference Bureau, explained that the shift to older childbearing largely reflects young adults waiting to get married. That entails fewer children overall, Mather noted, because “it does get more difficult as people wait until they’re older to start families.”

The big question is whether fertility rates for young women will pick up as the economy gathers strength. “Uncertainty still kind of rules the day,” said Sam Sturgeon, the president of Demographic Intelligence, a firm that provides demographic forecasts for businesses.

Sturgeon’s own expectation is that young women will return to childbearing once the economy strengthens, because “there’s a very strong two-child norm in the U.S., and we haven’t seen any evidence that women want fewer.” Nevertheless, he said, he wouldn’t be surprised if fertility rates for teens and women in their 20s did not pick back up.

This I found odd:  is there really a two-child norm?  Perhaps this demographer has access to data that quantifies this — but I’m not buying it.  Sure, there are two-child families, but there’s a strong trend of childlessness, and wasn’t there a book out defending the one-child family?  I would be really surprised if the two-child norm was really a driving force in fertility trends, so much as 3 or 4 children-families balancing out 0 or 1-children.

(I poked around in the data some, and the closest I could find is a CDC report which didn’t to the math to extrapolate to a children-per-women distribution, but reported on actual and expected – via survey – children.  For “actual,” let’s look at the distribution for women ages 40 – 44:  true, the most common number of children is 2, at 35%, but:  15% of women have no children, 15% only one, 20% have three, and 14% have four or more.  Interestingly, more women “expect” to have 2 children — 41% of all women — but this is due to a decline in the percent expecting 0 or 1 children, only 21% instead of 30%, and, from what I’ve read before, in the end, women, in general, end up having fewer children than they expect, not more.)

But take a look at this: 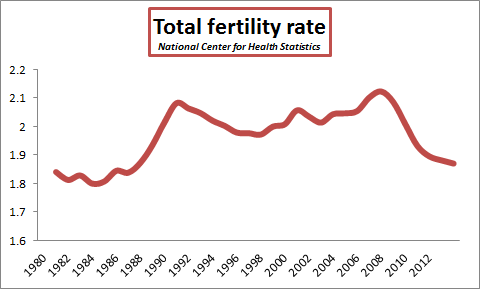 That’s the graphic from this article.

The drop in the last several years still means that we’re higher than in 1980.  Was this due to the 1970s “population bomb” fears being eased?  Or is this due to the drop in Hispanic childbearing, which the article also mentions: “But the number of children per Hispanic-American woman has plummeted from just under three in 1990 and 2.7 as recently as 2008 to 2.19 in 2012, just above the replacement rate.”

This drop is astonishing, but the article doesn’t indicate how much of the total TFR drop is attributable to Hispanic fertility drops.

Are these temporary economic declines?  Or is this a permanent drop due to changing cultural expectations, such as an increased openness to childlessness or one-child families, or a greater push for “welfare moms” to use contraception?  One suspects that, even if the initial fertility drops were due to the economy, with young people feeling that it takes longer to become “established” and ready to parent, the longer the sluggish economy persists, the more likely it is for cultural expectations to simply have changed enough that fertility rates will be permanently lower?

Or is this all due to the changing patterns among minorities?

June 7, 2014
The New Manchurian Candidate? (with bonus commentary)
Next Post

June 11, 2014 Why did Cantor lose, and Graham won?
Recent Comments
0 | Leave a Comment
Browse Our Archives
get the latest updates from
Jane the Actuary
and the Patheos
Catholic
Channel
POPULAR AT PATHEOS Catholic
1

What Not to Say to a...
Steel Magnificat
Related posts from Jane the Actuary