You know the adage:  if all you have is a hammer, everything looks like a nail.  Also, the recurring Ann Althouse theme:  whenever there are differences between men and women, activists and journalists will find ways to turn that into an injustice perpetrated against women, or a way in which they are superior to men in some way.

Here’s an example from Sunday’s Chicago Tribune — actually a syndicated feature originally published on January 8, but never mind that — titled “Single Women Shut Out” online, and “Why are so many young women living with parents?  Difficulty in securing loans may be factor,” in the paper.

According to an analysis of Census Bureau data by the Pew Research Center, a larger share of young women are living at home with Mom, Dad or other relatives than at any point since the 1940s. That is, 36.4 percent of women ages 18 to 34 resided with family in 2014. (A larger share of young men in that age group — 42.8 percent — are living at home. But that percentage does not surpass the highest rates on record like the women’s share does.) . . .

But mortgage industry expert Becky Walzak suspects there’s more at work here than demographics. She says the home loan approval process still looks down on women. Not overtly, she says, but underwriters still perceive women as “lesser” than men.

Based on her deep-dive read of data collected under the Home Mortgage Disclosure Act, Walzak says women “are less able to meet (underwriting) standards then men.” And the process is even harder on black women, who are often the primary applicants on loans to African-Americans.

Women, Walzak, have lower incomes due to time off for childrearing, and consequently have lower down payments.  They also have higher student loan debt — $20,000 vs. $14,000, and carry more debt, in general, because “women’s spending patterns are often different than men’s.”  Hence, she calls for “some kind of credit policy or new product that meets their needs.”

But here’s the source data: 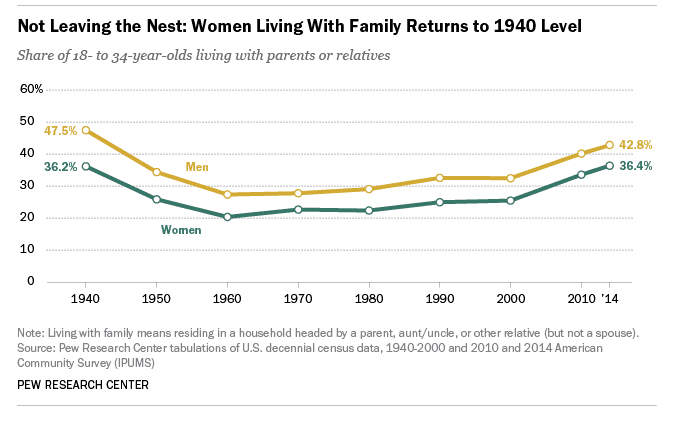 the original Pew study was released on November 11, 2015, and, indeed, if you look at the chart, men have lived at home at greater rates than women since tracking began.  True, women are living at home now at greater rates than in the 1940s, but that doesn’t mean much, given that circumstances have changed so dramatically.  After all, both men and women living at home were doing so in a context of wholly different societal expectations as well as the continuing impact of the Great Depression.  Rates dropped dramatically in 1950, when men returned from war and the postwar prosperity and building boom meant they could afford to marry and move out, but edged back up as both men and women attended college in larger numbers* and had greater difficultly establishing financial independence (or even returned back to the social acceptability of living at home after college).

* According to the Pew study site, the data is taken from census information which classifies students responding to census forms while living in a dormitory as “living in group housing” rather than “at home,” so only students attending while commuting from home are included as “living at home,” but it still impacts the numbers.

And how many of these away-from-home men and women are living in their own homes, vs. in apartments, alone or with roommates?  Walzak would have you believe women are trapped as renters because of their economic circumstances.

But — surprise! — single women are actually significantly more likely than single men to purchase their own home.  There’s no government data on the sex of single homebuyers, but according to the 2015 Profile of Home Buyers and Sellers, as published by the Realtor association,

The rate at which single women have been buying homes, relative to single men, was somewhat dampened in 2015; in prior years, the differential has been even higher.  The Realtor association has an entire “Field Guide” for agents working with single women, including links with further data.

And what’s going on with “spending patterns” producing more debt?  Are these single mothers living paycheck to paycheck, or young women filling their closets with clothes?  There’s no data backing this statement, but, according to this US News article, young women, under age 25, and older women, age 55 – 64, are more likely to carry credit card debt than men in their age groups, but their original source makes it clear that for other age groups, there were no statistically significant differences.

So this is an exercise, in the end, in identifying the earth-shattering conclusion that journalists don’t necessarily possess top-notch critical thinking skills.  But there you go, a little something to start your Monday with.

January 31, 2016
Three questions about the Islamic Society of Baltimore - UPDATE
Next Post 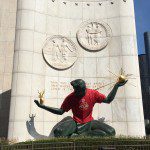 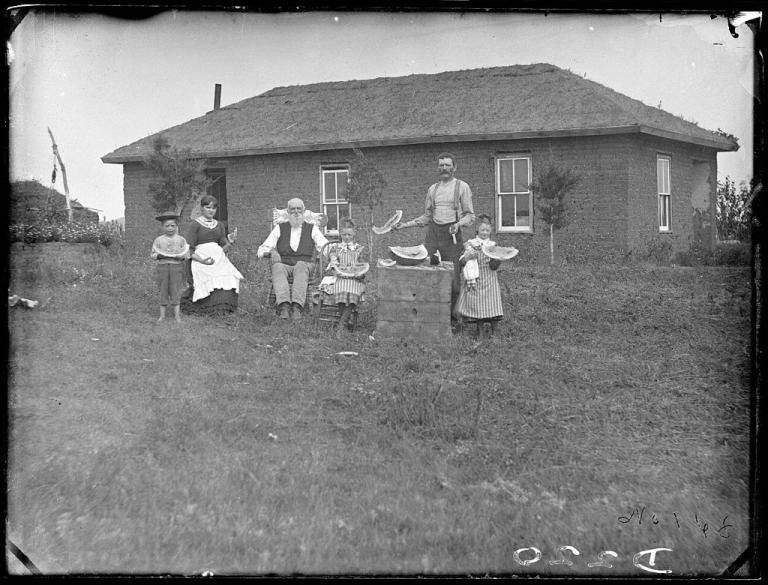 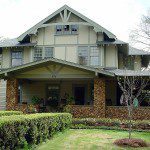 Catholic
Why buy?
Jane the Actuary

Catholic
In the case of the pregnant UPS worker,...
Jane the Actuary

Catholic
Update on Young vs. UPS: the "Pregnant Workers...
Jane the Actuary
TRENDING AT PATHEOS Catholic