Why Are You Yelling? Or the Failure of Catholic Blogging

Why Are You Yelling? Or the Failure of Catholic Blogging July 16, 2016 Chase Padusniak

Unsurprisingly, I am surrounded by Catholic bloggers: opponents, friends, frenemies, and every other color of the proverbial Apostolic rainbow. And, frankly—for a long time and from all sides—the sheer intensity of it all has troubled me. Why is everyone yelling so much? What’s with the name-calling?

Obviously anger can easily overcome us; being charitable can be very hard. And yet, God promises us more than pettiness and the gnashing of teeth.

Mark Shea recently (and very bravely) admitted both his sins and his exasperation on his blog, and a recent response to some of my fellow Patheos writers from Austin Ruse over at Crisis shines brightly with the light of condemnation.

With this weighing on my mind, last night I was reflecting on a daily reading, and was struck by a little-read passage in a little-read letter:

This saying is trustworthy. I want you to insist on these points, that those who have believed in God be careful to devote themselves to good works; these are excellent and beneficial to others. Avoid foolish arguments, genealogies, rivalries, and quarrels about the law, for they are useless and futile. After a first and second warning, break off contact with a heretic, realizing that such a person is perverted and sinful and stands self-condemned. (Titus 3:8-11)

“Avoid foolish arguments, genealogies, rivalries, and quarrels about the law, for they are useless and futile.” And how much more true is this when heresy is not the question? If your interlocutor believes the Creed, goes to church, finds grace in the Sacraments, and the other minimum requirements of what we might call an “active and faithful Catholic life,” then why the ire? If the questions at hand are prudential, and not dogmatic or even doctrinal, why not express disagreement in charity?

In fact, earlier in the third chapter of Titus (and it is not a long chapter), the author speaks to the attitude, which must lie behind the injunction I quoted above:

Remind them to be under the control of magistrates and authorities, to be obedient, to be open to every good enterprise. They are to slander no one, to be peaceable, considerate, exercising all graciousness toward everyone. For we ourselves were once foolish, disobedient, deluded, slaves to various desires and pleasures, living in malice and envy, hateful ourselves and hating one another. (Titus 3:1-3)

Now, I know I am naïve; I know that this attitude is precisely what does not (conventionally, anyway) make for good blogging, but I have spent too much of my life weighed down in the quagmire of anger, malice, and self-absorbed sorrow. In other words, I am happy to surrender clicks, views, and reads if it means maintaining a more joyful personage, of demonstrating charity to friends and “foes” alike.

And to think we are called to charity toward the non-Christian more than even the Christian!

If my fellow Catholics have a problem on a prudential question, I am happy to have (an even intense) discussion, a debate—an art common to the medieval schools, the, perhaps to this day, most famous hotbeds of rational Christian discourse.

If we cannot treat each other with mutual respect and love, what hope do we have of convincing the world of God’s peace?

And, for what it’s worth, I see no reason that the St. Maria Goretti question (the most recent cause of this controversy) can’t have a “both / and” answer. Purity can be preferable without being necessary, or, frankly, at times even personally desirable (for example, as a man with a past, I have found it prudential to date people who also have pasts, though that is not a universal rule for everyone; it is merely what most allows me growth and mutual understanding). The virgin-martyr can die to protect what she conceives of as a virtue, motivated ultimately by a faith in Christ—thus we get both “purity” and “love / faith” as causes, with plenty of room for prudential decision-making. Of course, how one expresses that complex relationship is important, and it is precisely this how that has been the subject of this post.

I submit St. Francis de Sales as an example that the medium can, in fact, be (a great deal of) the message. 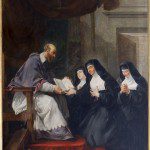 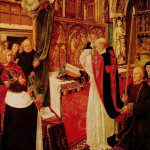 July 17, 2016 Versus “Versus Populum”
Recent Comments
0 | Leave a Comment
"Funny to me that Ludovici is someone who would believe in his own superiority and ..."
Eric The Religious Left and the Atheistic ..."
"This person defines and points out fascism, something that seems to make this commenter uncomfortable. ..."
gk90 The Medieval and the Fascist
"What if I find both Pezzulo and Skojec to be far more concerned of the ..."
Theodore Seeber When Virtue Becomes Vice and Vice ..."
"Dear Chase,I too have found that praying the Jesus Prayer to be enlightening. Just as ..."
Max Milian A Meditation on the “Jesus Prayer”
Browse Our Archives
get the latest from
Jappers and Janglers
Sign up for our newsletter
POPULAR AT PATHEOS Catholic
1

The Legend of St. Eustathius
The legend surrounding St. Eustathius tell us how he went from being...
view all Catholic blogs
What Are Your Thoughts?leave a comment
Copyright 2008-2020, Patheos. All rights reserved.