Devout Jews in Ukraine stay to pray and await ‘apocalypse’

They carefully lay down their “tefillin” prayer boxes before heading into another room for the morning service, where their voices compete with the sound of air sirens outside.

“We spend the whole day in the synagogue, praying, studying the Torah,” says Odele, 46, who asked to withhold her surname.

She left Israel a year ago to live here, some 200 kilometers south of Kyiv, to be close to the grave of the revered rabbi, Nachman of Breslov, who founded a Hasidic movement that settled in this town in early 1800s.

She leans over her prayer book, lit with a pocket torch. Her son, one of her nine children, is glued to her side.

The war, she says, is “a sign from the messiah”.

“It was written. It will start with war, then will come to the apocalypse,” says Odele.

She is one of only two women left in the community.

Although the area has yet to see any significant combat, the frequent air sirens have encouraged most to head for Moldova, 130 kilometres to the southwest, leaving just 30 people.

The tomb of Nachman of Breslov, founder of a mystical Hasidic movement who died in 1810, attracts tens of thousands of pilgrims each year.

But now the neighbourhood’s storefronts, hotels, kosher restaurants and pharmacies are empty — there are few signs of life beyond the dogs roaming among the bins and the occasional ambulance.

Around the synagogue, some of the faithful still try to keep to their routines, while gathering supplies and preparing for when the war reaches them.

The basement room that houses the “mikveh” ritual bath has been prepared as their bomb shelter.

A young member of the community, in military fatigues but without a weapon, liaises with a local militia.

Having served in the Israeli army, he took the responsibility of dealing with the Ukrainians: “We have found an agreement,” he says brusquely.

Another member, 27-year-old Nevo Suissa says the carnage is a test from God.

“We maintain our routine: some want to stay and pray, others who want to leave, that’s their choice,” he says.

“It is important that we continue our rites here, that there are prayers. Our prayers influence the course of the world, they have the power to stop this situation,” he adds.

In a storeroom, a pile of religious books have been stored under a metal roof in the hope of preserving them from the snow and potential fires.

Ohad Dror, 36, lights a candle on the windowsill and begins his morning of study.

“We continue the prayers for the dead, we watch over our books and we do a little cleaning too,” he says.

This piece originally appeared on France24.com. 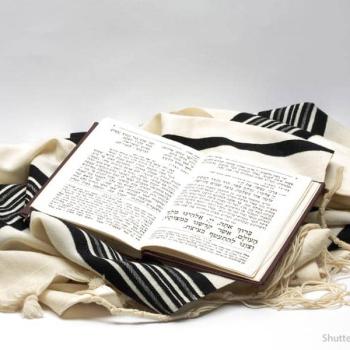 Jewish
Did False Prophets Motivate Events at the US...
Jewish Voices
TRENDING AT PATHEOS Jewish

Blessings in Winter
Parashat Chayei Sarah (Genesis 23:1-25:18) After Sarah’s burial, the narrative of the Torah...

Recipes for Good Moments
Getting Busy in the Kitchen of Your Soul Being back in NYC...

Drawing out the Tender Side
Parashat Vayeira (Genesis 18:1-22:24) Time barrels on as the seasons change and...
view all Jewish blogs
Copyright 2008-2021, Patheos. All rights reserved.
Close Ad