We have seen weather do lots of damage this year. From the tsunami in Sri Lanka and Southeast Asia to Hurricane Katrina in the United States just last month, we have discovered that weather storms can wreck with lifestyles. Houses become blown away, and crops become destroyed. Infrastructure that we take for granted such as electricity, road systems, and oil production distribution get disrupted. Luxuries that we depend on to survive (such as oil) become unaffordable.

What I have noticed in these two seemingly unrelated events is a system that God uses to get our attention. In the first case, the majority of people affected were non-Christians. Therefore God can and does use weather systems to let people know He exists. He uses storms to let people know that He is the God of power. Idols cannot change the weather, only God can. I found it fascinating that the area most affected by the tsunami during the Christmas season of 2004-2005 occurred in the area with the least amount of Christians. Did God send this tsunami to warn people about Him? There are many cases of this in the Bible. Let me share just a few:

And God saw the earth, and behold, it was corrupt, for all flesh had corrupted their way on the earth. And God said to Noah, “I have determined to make an end of all flesh, for the earth is filled with violence through them. Behold, I will destroy them with the earth.
(Genesis 6:12-13 ESV)

God warned Noah 120 years before the Flood came that He was going to send the biggest storm in history.

For behold, I will bring a flood of waters upon the earth to destroy all flesh in which is the breath of life under heaven. Everything that is on the earth shall die.
(Genesis 6:17 ESV)

Of course, God warned the people that a flood was coming – a flood that would destroy all of humanity. That is different than using a storm to warn people that God is there. So, where do we find evidence of this type of warning system in the Bible?

There are a couple of examples of how God used weather patterns to warn other people that He existed, that He was the only God, and that He wants them to know Him.

But for this purpose I have raised you up, to show you my power, so that my name may be proclaimed in all the earth. You are still exalting yourself against my people and will not let them go. Behold, about this time tomorrow I will cause very heavy hail to fall, such as never has been in Egypt from the day it was founded until now.
(Exodus 9:16-18 ESV)

God sent Moses to deliver the people of Israel out of slavery under the Pharaoh of Egypt. God shows Pharaoh that God is the only God by doing many miracles through His servant Moses. Not just stick-to-snake tricks that could be repeated by others, but powerful natural wonders. One such work of nature was a hail storm. God says the reason that God raised Pharaoh to power was to come to this point – where God would show him (Pharaoh) that God is the only God. God raised Pharaoh of Egypt up so that God could later show His power over nature, so that God’s name would be proclaimed in all the earth.

God did say that the other plagues were for the specific purpose of letting the Egyptians know that the Hebrew God Jehovah was the only God to worship.

For this time I will send all my plagues on you yourself, and on your servants and your people, so that you may know that there is none like me in all the earth.
(Exodus 9:14 ESV)

But with the plague of hail, God specifically stated its purpose. God wanted the entire world in all of history to know that He was the only God. That is God’s warning system.

September 16, 2005
Spirit of Prostitution - A Tale of Two Sisters
Next Post

December 14, 2005 Deuteronomy 7:6-14 Growing in Faith to Pray
Recent Comments
0 | Leave a Comment
Browse Our Archives
get the latest updates from
Jim Erwin
and the Patheos
Evangelical
Channel
POPULAR AT PATHEOS Evangelical
1 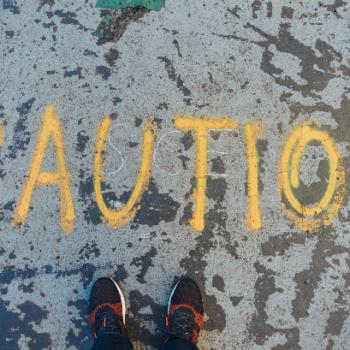 Evangelical
The Christian Responsibility to Warn Others
Jim Erwin