When we speak about demonstrations, we usually talk about showing our view or opinion AGAINST a thing, a person, or an idea. Demonstrations can be a public display that shows others what we believe. Demonstrate can also mean to show evidence of about something.

Heike and I participated in a demonstration last week. We walked with others to demonstrate AGAINST a new entrance fee in the beautiful Rhododendron Park in the Botanika Garden in Horne.

In the past, it was free for anyone who wanted to come to the Rhododendron Park and walk. While it may have cost money to visit the Botanika Garden, Rhododendron Park stayed free. Then the politicians wanted to charge a fee to just enter the park, an €8 entrance fee. They wanted to use it to pay for a new restaurant in the park. They wanted to put up a big fence and make everyone go through one main entrance. Needless to say, the people were upset. So a group of interested persons set up a demonstration for April 1st.

They chose April 1st as the date for the demonstration because the new entrance fee was planned to begin on April 1st. So Heike and I got up on Saturday, and in the afternoon we walked to Horner Mühle.

There were about 200-300 people gathered there. There were many people holding a green sheet of paper with songs and other information about the demonstration. A few people were holding up signs that said:

“Wir wollen in den Rhodo rein, und sollen bezahlen, dass kann nicht sein!”
“We want to go in the Rhodo Park, and we have to pay, that cannot be!”

“Eintritt für Rhodo, 8 Euro? Dass ist für mir zu teuer!”
“Entrance fee for Rhodo is 8 Euro” That is to expensive for me!”

So we started to walk down the street with all of these people. We walked down one street for about a kilometer until we reached the Botanika garden. Along the way, one man would cheer us on. He would say that if we wanted the Rhododendron Park to stay free, we should whistle. So Heike and I are walking down this street and we were talking with someone next to us about many things.

We turned and gathered at the main entrance to the Rhododendron park. Once there, the leader thanked everyone who organized the protest. Then he introduced someone from the government. The representative said that they had read the articles in the newspapers and had listened to all the people. The evening before, someone decided to donate the amount of money necessary to keep the park open for another year.

At this point, I was quite happy. No entrance fee for another year! But what I did not know (because my wife and I had not read the newspaper that morning) was that this demonstration was announced as a demonstration of joy. People were demonstrating joyfully about the fact that there would not be an entrance fee.

If you had read your newspaper and had come to the demonstration, you were demonstrating for joy! You knew that on Friday, you were helpless. Going into the park was going to cost you money. But by Saturday, someone gave so that you could go in free.

This is the kind of demonstration that the people in Israel gave to Jesus on Palm Sunday. They demonstrated FOR Him. They knew that He could do something for them. They were helpless people and they demonstrated for the person who could help them.

Most of the crowd spread their cloaks on the road, and others cut branches from the trees and spread them on the road. And the crowds that went before him and that followed him were shouting, “Hosanna to the Son of David! Blessed is he who comes in the name of the Lord! Hosanna in the highest!” And when he entered Jerusalem, the whole city was stirred up, saying, “Who is this?” And the crowds said, “This is the prophet Jesus, from Nazareth of Galilee.”
(Matthew 21:8-11 ESV)

Jesus came into Jerusalem on a donkey. The people demonstrated before Him. They used palm branches instead of political signs. They sang songs about Jesus. It was the equivalent of a political demonstration. They were saying that they wanted to follow Jesus’ leadership.

Just as these people did in Matthew, and just Heike and I did last Saturday, you and I can demonstrate for joy about something or someone.

But did you know that Jesus demonstrated for us with joy? The cross was Jesus’ demonstration of joy.

And as Moses lifted up the serpent in the wilderness, so must the Son of Man be lifted up, that whoever believes in him may have eternal life.
(John 3:14-15 ESV)

Jesus refers to a time when the people of Israel were helpless. The people were complaining to God about the food. As a result, God let snakes spread through the camp and bite people. If they were bit, they died.

And the people spoke against God and against Moses, “Why have you brought us up out of Egypt to die in the wilderness? For there is no food and no water, and we loathe this worthless food.” Then the LORD sent fiery serpents among the people, and they bit the people, so that many people of Israel died.
(Numbers 21:5-6 ESV)

People were dying left and right. So the people changed their attitude real quick. They came to Moses and asked him to ask God for help. So God told Moses to take a bronze serpent and put it on a pole.

This image of a snake on a pole is the symbol widely used by the medical profession. The sign of a stick with a serpent wrapped around it is a sign of healing. You will usually see it in front of doctor’s offices. When you look to the doctor for help, you would be expected to be healed and live.

The same is true eternally with Jesus. Jesus demonstrated His love to us by dying on the cross. He took away our sin so that we may have eternal life. But Jesus did this act of going to the cross based on joy.

looking to Jesus, the founder and perfecter of our faith, who for the joy that was set before him endured the cross, despising the shame, and is seated at the right hand of the throne of God. Consider him who endured from sinners such hostility against himself, so that you may not grow weary or fainthearted.
(Hebrews 12:2-3 ESV)

Jesus saw the joy that would come AFTER the cross, and so He took on all of the problems that came with it – the shame, the hostility, even the cruel death. He went to the cross happily for me and you, and for His Father. Jesus saw joy in returning to His Father. Jesus knew that going through
such a hard thing as the cross would be the only way He could come to that joy. Jesus made His demonstration of joy for you and I. He carried His demonstration sign on His back. Then He was nailed on it, as a demonstration sign to the world of God’s love.

So when Jesus died on the cross, He joyfully made a public demonstration to the world of God’s love.

God made this demonstration sign for you and I because we are helpless.

When we were utterly helpless, Christ came at just the right time and died for us sinners.
(Romans 5:6 NLT)

We need God. You and I cannot live this life without God’s help.

God continues to show that demonstration sign of His love for us. The cross reminds us that God will keep demonstrating for us. He demonstrates because He wants us to come to Him. He wants our lives to be free just like the entrance to the park should be free.

While we were God’s enemies, he made friends with us through the death of his Son. Surely, now that we are his friends, he will save us through his Son’s life.
(Romans 5:10 NCV)

Have you considered how you will demonstrate your love and joy for God?

In addition, our Lord Jesus Christ lets us continue to brag about God. After all, it is through Christ that we now have this restored relationship with God.
(Romans 5:11 GW)

Maybe you don’t know love and joy. Maybe you feel helpless in this life that you live. Perhaps you are asking yourself if you can get help somewhere from someone. God is ready for you. You can turn from your helplessness and come to Him. You can look to Jesus and ask for forgiveness. You can demonstrate your desire to come to Jesus and make a life change.

Perhaps you are a Christian. You follow Jesus you say. Then you can demonstrate to the world about your Lord, Master, King, and Leader. You can make a joy demonstration to the world about whom you follow. You can show others what kind of God you have by the life you lead. You can tell other people to come to God’s love.

April 3, 2006
God's Responsible Love is the Source of God's Sovereignty
Next Post

April 11, 2006 Understanding Depression
Recent Comments
0 | Leave a Comment
"i really gain a lot of insight on how to defend marriage. This article was ..."
Nathan Andreas Mark 10:1-12 How to Defend Biblical ..."
"Excellent exposition, Jim -- Yes, and discernment is actually a free gift of the Spirit ..."
tovlogos What Christian Growth Looks Like
"Good analysis. For the generational gap the means of information doesn't change the content."
Jesse H 5 Major Fault Lines in the ..."
"Good study ....but example from ot charater may be inserted"
A TAMIL MARAN Nahum 1:1-7 Giving Comfort
Browse Our Archives
get the latest from
Jim Erwin
Sign up for our newsletter
POPULAR AT PATHEOS Evangelical
1 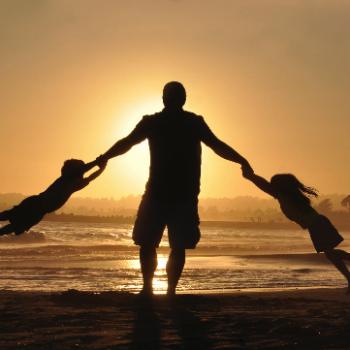