We worship the same God. We celebrate the same Savior. We sing the same song. We just sing in different ways. Let me show you what I mean.

Let’s sing this song “Amazing Grace”. We will sing it in a few different languages.
English:

Amazing grace, how sweet the sound, that saved a wretch like me.
I once was lost, but now am found, was blind but now I see.

Why is that so? Because the music touches the soul, but we must also comprehend the words.

Language can divide us. Language was created to divide us. In Genesis 10, all of the people came together to build an idol. So God mixed them up by language. He did that so that we would not forget to worship God.
And they sang a new song, saying: “You are worthy to take the scroll, And to open its seals; For You were slain, And have redeemed us to God by Your blood Out of every tribe and tongue and people and nation, And have made us kings and priests to our God; And we shall reign on the earth.” (Revelation 5:9-10 NKJV)

God has re-purchased us by selling off His Son Jesus. This chapter talks about the Lion who becomes the Lamb. Jesus died, not just so that we could become free. Jesus died, not just so that you and I could be children of God and come to live with God. Jesus died, so that you and I could come together in unity forever.
Then I looked, and I heard the voice of many angels around the throne, the living creatures, and the elders; and the number of them was ten thousand times ten thousand, and thousands of thousands, saying with a loud voice: “Worthy is the Lamb who was slain To receive power and riches and wisdom, And strength and honor and glory and blessing!” And every creature which is in heaven and on the earth and under the earth and such as are in the sea, and all that are in them, I heard saying: “Blessing and honor and glory and power Be to Him who sits on the throne, And to the Lamb, forever and ever!” Then the four living creatures said, “Amen!” And the twenty-four elders fell down and worshiped Him who lives forever and ever. (Revelation 5:11-14 NKJV)

So why is this important?

Why is unity so important to us as Christians? Because unity is one of the most effective ways to reach people who do not know Jesus Christ. Do you know that many people know more about Christians for what they stand separated against, than what they stand together for?

Christians are known in the world because they stand separated on the following issues:

But what are we known to stand together for? Not much folks.

Worship should be a way in which we can come together.

Some of you may know this song. It was introduced in 1971 as an advertisement slogan for Coca-Cola. The intention was to bring closer together and to do it using the soft drink. As Christians, we need to do the same thing. We need to work on ways to bring Christians together, and not on ways that separate us. Whether it is working together on projects like ProChrist or helping one another in need, or like giving in the offering today. The Kreuzgemeinde needs to repair the roof. But you can work together with them by giving financially to help repair it.

This is the spirit of Revelation 5. This is the idea behind the expression “singing a new song”.

“Singing the new song” is not taking away the meaning, not even the words. But it is putting them in a tune that can keep our attention.

Sometimes, we need to learn how to sing the new song, so that other people who need to hear the message of Jesus Christ can hear it and understand it. Let’s try that right now with “Amazing Grace”. But let’s sing it in this new way.
SING AMAZING GRACE WITH THE NEW TUNE.

Grace is a sweet sound. It is sweeter when we sing it together. 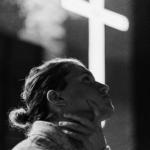 January 28, 2007 Lamentations 3:19-24 Trust in the Faithfulness of God
Recent Comments
0 | Leave a Comment
Browse Our Archives
get the latest from
Jim Erwin
Sign up for our newsletter
POPULAR AT PATHEOS Evangelical
1

The Fundamentalist War on Wokeness is...
Euangelion
Related posts from Jim Erwin