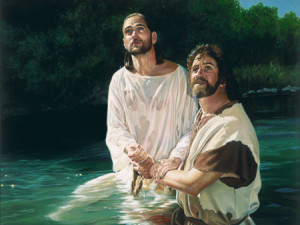 Like many prophets before him, John used a visual illustration (an object) to show a Biblical truth. John preached a message of repentance. He shared the good news that said this:

So from the beginning of John’s ministry, baptism was always a symbol. Baptism showed that God had forgiven sins and that one could be  Christian by showing that they were forgiven by changing their life.

The power of life change can only happen because of Jesus’ death on the cross. So John’s baptism only pointed to what Jesus would do later by dying on the cross. This is why Jesus could later be baptized by John. That baptism was before Jesus’ salvific act and therefore only pointed to a future event. In itself, the baptism of Jesus had no power. It only foreshadowed what He would later do.

When a Christian gets baptized, that person is  showing what Jesus has already done in the past. Because the baptism occurs after Jesus’ death on the cross and resurrection, it is a symbol with power. a Christian can trust in God’s gift of salvation and receive forgiveness of sins. The baptism which came after that point of trust would reveal the power which Christ had to change the person.

So baptism never changes you. Baptism only reveals how that change was made possible. Just as in John’s time, every Christian gives a personal object lesson to the world of the change in their lives.

Prayer: God, thank you that my baptism was a powerful picture of how Jesus changed my life. Let me continue to show how important a baptism of repentance is in the life of a believer. 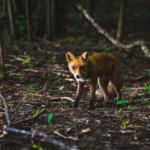 December 8, 2014 No Fear
Recent Comments
0 | Leave a Comment
"I am impressed with this interpretation and it is easy to understand. Thank you."
Anne Horst Ahrens Revelation 14:14-20 The Two Great Harvests
"Dear Sir,I've been blessed by reading life-changing messages from these top 10 sources of free ..."
Mike Nkwa Top Ten Sources of Free Sermons
"2. Christian integrity cannot be separated apart from a relationship with JesusThen everyone who has ..."
bill wald How to Grow a Balanced Christian ..."
"Grew up near Houston. That explains most of it."
Robert Conner Working Together to Accomplish the Mission ..."
Browse Our Archives
Follow Us!

COVID-19 as Catalyst for a Revival...
Cranach
Related posts from Jim Erwin