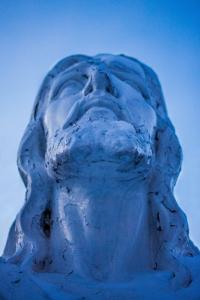 In Andrew Lloyd Webber’s interpretation of the Gospel account, Jesus is considered a Superstar. Some of you may watch a version of his play this Easter which is entitled Jesus Christ Superstar. Today I begin a new series entitled “How to Be a Christian STAR.” I want to give you an overview of how to be a STAR. To be a star in life, we need to look to Jesus.

I am beginning this series on Easter because I want to highlight the importance that Jesus has for us as Christians. He wants you and me to be a Christian STAR. It requires an important attitude. Jesus gave us our example of how to be a STAR.

I want you to realize that being a Christian is not about being individuals. There is no one individual star in the sky. Instead, there are billions of stars. The same is true of the Christian life. We follow the example of Jesus. So today, we are going to look at the ultimate STAR of the Universe, Jesus. We are going to see how He makes us by His example to be a star.

“who, existing in the form of God, did not consider equality with God as something to be exploited. Instead he emptied himself by assuming the form of a servant, taking on the likeness of humanity. And when he had come as a man,” (Philippians 2:6–7, CSB)

The first way that Jesus showed Himself to be a STAR is that He shared of Himself.

Jesus shared in our humanity. That means that Jesus knows what it means to be human. He is fully God but also fully human. He “emptied Himself” of His divine nature when He came to Earth. What does that mean? It means that He chose to ignore His divine status. He has the right to claim divine status. Jesus is the STAR of the Universe. He is the ultimate Superstar.

The first way that Jesus shared of Himself is that Jesus chose to diminish that status. He still has the right to use His divine status. Instead, He chose to ignore it. He didn’t tell people that they need to come and bow to Him. He didn’t use His divine status to gain a political advantage. Instead, He “emptied Himself” of all that. The reason is that sharing God’s love and our need for God is more important than Jesus’ status as God’ Son.

Jesus doesn’t need my “liking of Him” by giving a Facebook “thumbs up” for me to believe in Him.

The second way that Jesus shared of Himself was that Jesus became like us. He thought less of Himself. He did that by being a servant, thinking of others first.

The saying goes that you can be so heavenly minded that you become no earthly good.

Jesus was so earthly minded that He made heaven look good.

He let people get to know Him personally. He started with twelve men and grew that number of relationships. He did that spending time with them. Jesus set Himself out to spend time with others.

“Instead he emptied himself by assuming the form of a servant, taking on the likeness of humanity. And when he had come as a man, he humbled himself by becoming obedient to the point of death— even to death on a cross.” (Philippians 2:7–8, CSB)

The first way that Jesus was a servant was that He emptied Himself. If I am going to be a servant, I need to think less of yourself. Jesus knew this. Jesus emptied Himself of His divine status.

The second way that Jesus was a servant was that Jesus humbled Himself. In the Bible, there are two ways in which humility happens. Either, you get humbled, or you choose to humble yourself.

“But he gives greater grace. Therefore he says: God resists the proud, but gives grace to the humble.” (James 4:6, CSB)

The Bible shows in various verses that either I can humble myself, or I can get humbled.

In a first way, you get humbled. Circumstances happen that bring you to the point of humility. Someone once said that “humility is made with 1000 humiliations.”

In a second way, you can make yourself humble. Jesus made Himself humble. During His entire ministry, Jesus was humble. He chose to be humble.

Jesus called it being “meek.” Need does not mean being weak. It means “strength under control.” It is a form of humbleness.

Were there times when Jesus was humiliated? Yes. Peter denied Him. Judas betrayed Him. People spat on Him. The Jews insulted Him. But Jesus was already humble. He didn’t need these circumstances to make Him humble.

The third way that Jesus showed Himself to be a servant was by being obedient. Jesus was obedient because He was humble. Humble people are obedient. Disobedient people have a pride problem. Jesus was totally obedient to God’s will. How do we know? Because the passage that he was “obedient unto death.” Jesus trusted God the Father when He decided to obey Him by going to the cross.

“he humbled himself by becoming obedient to the point of death— even to death on a cross.” (Philippians 2:8, CSB)

The third way that Jesus showed Himself to be a STAR is that He acted. Jesus did not let the Cross happen to Him. Instead, Jesus was active in His effort to go to the Cross. Jesus was “obedient unto death.” This means that Jesus knew that God’s will for Him was to set an example and to go to the cross.

But there was part of God’s will that was hard for Jesus. He prayed three times to not go to the cross. But instead of being disobedient, Jesus acted on God’s will for Him by being obedient unto death. Jesus went to the cross.

Jesus was obedient by going to the cross to die for everyone’s sins. He died as a mediator between me and God. Therefore, God rewarded Jesus for this obedience by exalting Him.

“he humbled himself by becoming obedient to the point of death— even to death on a cross. For this reason God highly exalted him and gave him the name that is above every name, so that at the name of Jesus every knee will bow— in heaven and on earth and under the earth— and every tongue will confess that Jesus Christ is Lord, to the glory of God the Father.” (Philippians 2:8–11, CSB)

The fourth and final way that Jesus showed Himself to be a STAR is that He rejoiced. Jesus worshiped the Father, in anticipation of His own worship by us His followers.

Because Jesus died not he cross, because He paid the sin debt that everyone owed God, God rewarded Him. God rewarded Jesus by placing Him in a place of worship. God placed Jesus in a position where Jesus would rejoice. Jesus rejoices as we rejoice in Him. Jesus inhabits the praises of his people. Jesus lives for our worship.

Jesus is going to have a name that is above other names because He died for sin and God raised Him to life. That act – the cross and the resurrection puts Jesus in a place where it demands worship. Jesus overcame death and offers that same privilege to you and me. Because not everyone is going to overcome death.

If you died tonight, do you know where you would go? Because the Bible says that God is not going to resurrect you because of what you have done in life. God will wake you back up after death But you will not get exalted. You are going to go to a place where it will not be a joy to worship Jesus.

The question that this passage presents on this Easter morning is: Are you going to make Jesus the superSTAR of your life? You can do that today.

Photo by Scott Rodgerson on Unsplash

How to Be a Christian STAR Part 2 – Learning to Share

Romans 8:31-32 Easter Is Just the Beginning of God’s Love

The Power of True Christian Love

5 Reasons Why the Resurrection Is Essential to the Christian Faith

April 6, 2018
The Power of True Christian Love
Next Post

April 18, 2018 Learning to Share
Recent Comments
0 | Leave a Comment
Browse Our Archives
get the latest updates from
Jim Erwin
and the Patheos
Evangelical
Channel
POPULAR AT PATHEOS Evangelical
1