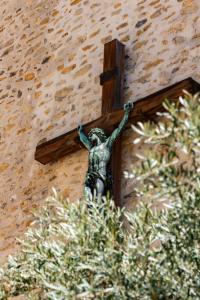 In the other Gospel accounts, Jesus speaks at various points while on the cross. There are actually seven statements that Jesus made on the cross. I find it curious that Mark focused on only one of those statements. Jesus quotes the first verse of Psalm 22. Was it a cry because God was absent in Jesus’ most desperate hour? Or perhaps it was the first point of a Gospel presentation.

“That’s one small step for man, one giant leap for mankind.”

“A long time ago in a galaxy far far away.”

“I pledge allegiance to the flag of the United States of America.”

When bystanders hear “Eloi/Eli,” it sounds sufficiently like the Hebrew for “Elijah” (’elia) to make them think that Jesus is calling out to the prophet Elijah, taken to heaven in a whirlwind (2 Kings 2:1–12) and viewed as a messianic figure who would return when needed (Mal. 4:5). So they believe that Jesus is calling for Elijah to come and rescue him.1

I believe that Jesus is giving His personal testimony of His work on the cross, while He is on the cross. Anyone who knew the first line of this psalm would know that it pointed to Jesus. Jesus used this psalm to show people their need for Him. How did Psalm 22 point to Jesus? Follow the main points of the psalm:

THE GOSPEL ACCORDING TO PSALM 22

The rejection of Jesus Christ as God’s Messiah

“But I am a worm and not a man, scorned by mankind and despised by people. Everyone who sees me mocks me; they sneer and shake their heads:” (Psalm 22:6–7, CSB)

“Those who passed by were yelling insults at him, shaking their heads, and saying, “Ha! The one who would destroy the temple and rebuild it in three days,” (Mark 15:29, CSB)

The virgin birth of Jesus Christ

“It was you who brought me out of the womb, making me secure at my mother’s breast. I was given over to you at birth; you have been my God from my mother’s womb.” (Psalm 22:9–10, CSB)

The persecution of Jesus on the cross

“Don’t be far from me, because distress is near and there’s no one to help. Many bulls surround me; strong ones of Bashan encircle me. They open their mouths against me— lions, mauling and roaring.” (Psalm 22:11–13, CSB)

“Let the Messiah, the King of Israel, come down now from the cross, so that we may see and believe.” Even those who were crucified with him taunted him.” (Mark 15:32, CSB)

Jesus is pointing to this psalm which predicts the very events that are happening to Him while they watch. In a very surreal sense, the people below are watching prophecy unfold. The fact that prophecy is unfolding that shows the Messiah must suffer to save people for eternity should make them come to Him.

“I am poured out like water, and all my bones are disjointed; my heart is like wax, melting within me. My strength is dried up like baked clay; my tongue sticks to the roof of my mouth. You put me into the dust of death. For dogs have surrounded me; a gang of evildoers has closed in on me; they pierced my hands and my feet.” (Psalm 22:14–16, CSB)

“They divided my garments among themselves, and they cast lots for my clothing.” (Psalm 22:18, CSB)

“So they said to one another, “Let’s not tear it, but cast lots for it, to see who gets it.” This happened that the Scripture might be fulfilled that says: They divided my clothes among themselves, and they cast lots for my clothing. This is what the soldiers did.” (John 19:24, CSB)

Jesus was mocked and insulted while on the cross

“Those who passed by were yelling insults at him, shaking their heads, and saying, “Ha! The one who would destroy the temple and rebuild it in three days, save yourself by coming down from the cross!”” (Mark 15:29–30, CSB)

Jesus proclaims the Gospel to people around Him. He is sharing about their need for God.

“I will proclaim your name to my brothers and sisters; I will praise you in the assembly. You who fear the Lord, praise him! All you descendants of Jacob, honor him! All you descendants of Israel, revere him! For he has not despised or abhorred the torment of the oppressed. He did not hide his face from him but listened when he cried to him for help.” (Psalm 22:22–24, CSB)

Jesus even predicts from the cross by referencing this psalm that the Jews will reject Jesus and the world will accept Him:

Some will reject the Messiah

“I will give praise in the great assembly because of you; I will fulfill my vows before those who fear you. The humble will eat and be satisfied; those who seek the Lord will praise him. May your hearts live forever! All the ends of the earth will remember and turn to the Lord. All the families of the nations will bow down before you,” (Psalm 22:25–27, CSB)

Jesus predicts the beginning of the church from this psalm:

“Their descendants will serve him; the next generation will be told about the Lord. They will come and declare his righteousness; to a people yet to be born they will declare what he has done.” (Psalm 22:30–31, CSB)

The death of Jesus is only the beginning. Thankfully, the story doesn’t end with Jesus dying on the cross.

For the followers of Jesus, “Good Friday” must have been the bleakest day of their lives. Jesus was crucified. Jesus was dead. And yet it was only Friday. On Sunday, Jesus would rise from the dead in fulfillment of prophecy, and he would show his disciples his nail-pierced hands and feet. Through the tragedy of Good Friday would come salvation for all who trust in Jesus. In this well-known sermon, Campolo draws on a powerful sermon preached by his pastor at his church in West Philadelphia that centered on the refrain, “It’s Friday. Sunday’s a-comin’.” Campolo proclaims, “It was Friday, and my Jesus was dead on the tree. But that’s Friday. Sunday’s a-comin’.… Friday Mary’s crying her eyes out. The disciples are running in every direction like sheep without a shepherd. But that’s Friday. Friday. Sunday’s a-comin’!”2 What seemed like certain defeat was the greatest victory in all of history, for Jesus destroyed the power of sin in our lives!3

Many movies end with the credits with the words “The End.” However, there is a sequel to this movie.

“The End” does not end at the cross. Instead, the cross means that there is a “To be continued. Jesus will return.”

Photo by Paul Keiffer on Unsplash

God’s All-Star Plan for Me
Steps to Effective Personal Evangelism
Are You Curious About God? 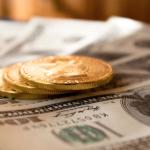 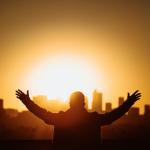 May 27, 2019 Praying For My Community
Recent Comments
0 | Leave a Comment
"I would of gone just I little further with the scripture that you mentioned so ..."
D.M.S. What Christian Growth Looks Like
"i really gain a lot of insight on how to defend marriage. This article was ..."
Nathan Andreas Mark 10:1-12 How to Defend Biblical ..."
"Excellent exposition, Jim -- Yes, and discernment is actually a free gift of the Spirit ..."
tovlogos What Christian Growth Looks Like
"Good analysis. For the generational gap the means of information doesn't change the content."
Jesse H 5 Major Fault Lines in the ..."
Browse Our Archives
get the latest from
Jim Erwin
Sign up for our newsletter
POPULAR AT PATHEOS Evangelical
1

What “The Rise and Fall of...
Between Two Kingdoms
Related posts from Jim Erwin