Strong and Weak: Up and To The Right

Strong and Weak: Up and To The Right August 9, 2016 Jonathan Storment

So today I want to finish the review I’ve been doing the past week on Andy Crouch’s excellent little book “Strong and Weak” If you are in any kind of leadership position, I can’t recommend this book highly enough. And if you have a certain allergy to leadership books, than trust me, this is just the book for you.

Because this is not your average leadership book. This is not a book about realizing your true potential or cracking the leadership ceiling, it’s not in any way a self-help book, because true leadership, according to Crouch, really begins when you lose all interest in self-help books.

Here’s what he means:

According to Crouch the greatest paradox of leadership is to hold in tension both vulnerability and authority as image bearers of the God who created us. And in order to do this we have to be willing to bear vulnerability without using our authority to defend ourselves from pain.

So a few months ago, I invited Andy to come to Highland (the church I serve) and when he presented this material to the leadership, he said that in his own life, privilege functions as a kind of permanent temptation. Because of the authority he has, everywhere he goes people are trying to take care of him, watch out for him, and so he has to constantly push against being coddled and privileged.

But this begs the question, Why would anyone fight against that?

For Crouch the reason is simple, to truly help other people flourish, a leader must use their authority by laying it down, creating space for other people to share in it.

There’s an old saying in leadership that originates with Ronald Heifetz,  a professor from Harvard’s school of government who says “the primary responsibility of every leader is to avoid assassination.”

But Crouch says a better way to  understand that is that saying is that you can only be assassinated once. So choose what you will die for wisely.

Descent to the Dead

Behind a lot of our talk of leadership is a subtle kind of idolatry. We love control and being upwardly mobile, we don’t so much pursue ways to relinquish the power we have accumulated.

But if we are to truly lead people in a Christian way, it will involve doing just that.

There’s an odd phrase in the Apostle’s Creed, that is alluded to in certain passages in the Bible. It goes like this:

[We believe] Jesus suffered under Pontius Pilate,
was crucified, died, and was buried;
he descended to hell.
The third day he rose again from the dead.

Christians, for over 200o years, have believed that after Jesus died he descended to the dead. In some Orthodox versions of this story, Jesus breaks the prison bars of death and harrows hell.  The New Testament sees Jesus death as something that Jesus Himself chose.

In laying down His life, Jesus is creating another way, one that isn’t oriented around avoiding death (in all it’s forms).

Here’s how Crouch says it:

Only those who have descended to the dead can be fully trusted to lead-because only they can truly declare vanquished the fear that animates all idolatry and exploitation.

The real problem with leadership today is not that leaders don’t have enough authority. All of us are made in the image of God the true and only Ruler of the Universe. You are blessed with incredible gifts that you may or may not use for the good of others.

In the beginning of the Bible, God places human beings as co-regents in His good world. And in the words of Crouch, “If that was true of our beginning, it is all the more true of our future. “Do you not know that we are to judge angels?” Paul asks the Corinthian church.

The problem is that we don’t use our God given authority the way that God Himself chose to use it…For the flourishing of others, and opening ourselves us to being vulnerable in the suffering of the world.

That’s the true secret of leadership. And when you see it in people like Nelson Mandela, or Pope Francis or Martin Luther King Jr. or the countless people in your own life who played smaller roles in history but no doubt grasped this idea intuitively, you will always notice other people around them flourishing because they are pushing against their own privilege for the sake of something greater than creating their own resume.

You won’t read this in Forbes or Harvard Business Review, but the secret of leadership is to lead like Jesus, to descend to the dead, and to choose your assassination wisely.

It’s counter-intuitive, but history bears this out. This is the way of leadership that actually leads to life.

But first it stops avoiding death.

So every since Andy Crouch came to our church we’ve started to adopt his teminology. Whenever we’re facing a hard choice, or tempted to take a shortcut that will help us avoid sacrifice in some marginal way, one of our leaders will say to the rest of us. Remember, Up and to the Right.

It’s become a kind of mantra for me. And I’d love nothing more that for you to get this book and let this sink in for you as well. It’s the best way to live and it certainly is the best way to lead. From death to resurrection, or in other words…

Up and to the Right. 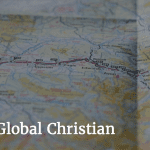 August 10, 2016 Being a Global Christian: Christianity Has Moved to the South
Recent Comments
0 | Leave a Comment
Browse Our Archives
get the latest from
Evangelical
Sign up for our newsletter
POPULAR AT PATHEOS Evangelical
1

What the Bible Says about Old...
Cranach
Related posts from Jonathan Storment