How To Get Along With Your Relatives at Thanksgiving

How To Get Along With Your Relatives at Thanksgiving November 22, 2016 Jonathan Storment

Because of the Thanksgiving Holiday, today’s post will be the only one for this week. But I think it’s a good one.

Especially for those of us who are going home for the Holiday after the most divisive political election in modern history. Maybe you saw this story about the man who punched a woman (who was a total stranger) in the face last week for talking bad about Trump.

And since nobody wants to have mashed potatoes and turkey thrown at their face this week, I thought I’d share this resource as a kind of tool for having the best possible kinds of conversation about the one thing that will be on a lot of our minds over Thanksgiving.

A couple of months ago, I shared a podcast that Michael Wear (a former White House staff member for President Obama) did with my friends Ian Cron and Suzanne Stabile. This past week Wear sat down with them again to talk through some ways that he’s processing through the election and gave some suggestions on how we Americans could help re-build some bonds that have been sorely tested over the past 18 months.

For those of you who don’t have time to listen to the entire hour, here are what I thought were the highlights:

First off, listen. Thanksgiving is a time where a lot of us crawl out of the echo chambers we’ve been in for the past few months and have to rub shoulders with people we love but who we share deep disagreements with.

Whenever Glenn Beck becomes the voice of cool reason you know something different is happening in the world of politics. On election night, Beck vowed to spend the next year listening to people that he disagreed with, to better understand where they are coming from and stop just making bombastic, apocalyptic predictions. So what say we all give that a try?

Change The Channel. Wear suggests that, in order to do that, we switch our media intake for a bit. Progressives watch some Fox News, Conservatives try to understand Black Lives Matter, read Ta Neshi Coates, and try to do so without a cold heart.

Don’t use Shame. Ian Cron has a fascinating bit toward the end of the podcast where he pointed out that this election has been fueled by shame more than others, and that shame is the most destructive of all emotions.

You have to accept the reality of other people’s shame fear and anger, accept their humanity even as you hope they accept your own. And as much as possible, try not to use your passions and ideas as weapons to coerce and silence others.

Be Self-aware Think carefully before you use social media to blast/accuse/blame others. Check yourself and ask yourself, “Why am I really doing this?” Make sure you are self aware of your own needs, so that you are operating from a deep place and not always reacting to the next crazy thing someone says.

This podcast is largely about learning self-awareness and compassion for others using a tool called the Enneagram, and if you are interested in what you hear you can buy their great new book about the Enneagram here.

This entire podcast is great and I hope you find it as helpful as I did.

November 17, 2016
The Gospel According to Stranger Things: Set in the 80's
Next Post 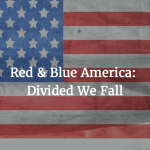 November 29, 2016 Red and Blue America: Divided We Fall
Recent Comments
0 | Leave a Comment
Browse Our Archives
get the latest from
Evangelical
Sign up for our newsletter
POPULAR AT PATHEOS Evangelical
1