Coloring Outside the Lines: Ancestry and Metaphors

So let’s take a quick, overly general look at the pre-Christian, aboriginal religion of the early Germanic peoples, shall we?

Disclaimer: I’m so not an academic. I know my sharing facts format is atrocious. But you should see me write out a murder scene…

Germanic religion refers to the indigenous religion of the Germanic peoples from the Iron Age until Christianisation during the Middle Ages.

Rooted in Proto-Indo-European religion, Proto-Germanic religion expanded during the Migration Period, yielding extensions such as Old Norse religion among the North Germanic peoples…

According to John Thor Ewing, as a religion it consisted of “individual worshipers, family traditions and regional cults within a broadly consistent framework”.

Sometimes I feel like I should have my own sound-faerie to follow me around. It’d make those eureka! moments all the better.

When I think of the Western world, I think Christianity. I think Holy Roman Empire. I think, you know… white. And while my skin is white (with a weird olive tone whose background genetics we can’t figure out), the colors inside my Self and my head and my imagination is anything but.

(It’s awkward mixing skin color plus color theory but here we are. You’ve come this far. May as well stick it out.)

So we’ve talked briefly about how the traditions I grew up with always struck me as white in feel and color, right? I mean, yes, culturally, but just in palette, too. Like an empty canvas you can’t paint on; or like a modern room all in white, inviting no touch or personalization. Santa! Flags! Costumes!

So? So… (Sew buttons on ice cream and watch them fall off!)

What colors am I looking to paint with, then?

I don’t know if I’m predisposed to rebel against structure or if my early attempts at Finding GodTM steered me away from it. Rather, I’ve shied away from organized religions and gravitated towards the other aspect: yes, disorganized religion.

Can I say again how depressing and laughable and stupid this is? Because I’ve been flailing in and out of these waters for years, decades, and in the past two months alone, it’s been eureka! after silently played eureka!. I don’t know what the catalyst was, exactly, or how I just managed to see or read or find what I needed to jar it all loose, but it’s led here.

So why would this make a faerie shake their noise-maker? Because of my frenetic and often tangential way of cycling through connections.

Yes, I know it doesn’t make the clearest of sense. Welcome, friend.

I’ve always, always felt drawn to Celtic culture (as I learned about it and then as I re-educated myself in later years). I have always been drawn to the concept and practice of practical magick; the workings of the fire and hearth and will and heart.

Do I want a religion? Do I see a religious calling?

What I see now is tradition that bends to the need; work that, well, works. I believe that what some may call miracles by deity, I call powerful workings of will. Are they the same thing?

My roots, my traditions, my holidays, have always been pinned firmly into post-Christianized Germany, and as we’ve discussed, mach das nicht.

Yet suddenly (magically!), I find this link that goes deeper than “just Germany” or “just Celtic”. It connects not just my genetics, but my internal compulsion towards the culture I never thought was mine? And combines the two into an early Germanic-Celtic foundation that hits me like a metal file to the teeth.

I’ve Just Had an Apostrophe

Y’all. Since absorbing this, I’ve felt that disconnect clench like a sphincter on the ragged edge of a fingernail. Less a hole and more a puckered scar, if you know what I mean.

(I’m not saying my sense of Self is a sphincter, but I’ve been called an asshole, so it’s a metaphor that just barely works.)

That connection I couldn’t nail (ahem) before? Somehow, there’s electricity crackling across my scalp, prickling the roots of my hair. Colors play under the white I’m saturated in. Throbbing greens, thick with life, the chill of deep and richly brown earth cradled in gleefully filthy hands. Oranges and reds, fire gold and blue.

I’m a writer; I imagine for a living. I play scenes and settings and smiles through my head, refine them on the page. Is this my imagination doing what it does best?

Is this something else?

How would I even go about figuring that out? How does one know?

Does it connect me to something only because it’s not the tradition I grew up with?

Am I grasping at ghosts?

I write in liminal spaces, and I pride myself on writing between the usual lines. It’s a sort of motto, my personal elevator pitch.

Part of me wonders if that’s the only reason my brain is engaged by all these eureka! moments. It’s the kind of stuff that would be so much easier to grok when in fiction.

Outside the lines (between them, if we’re talking wordage and not art) is where I operate best. It’s my identity and my mission statement. Between the lines is how I like to splash my colors and watch them bleed through; even my tattoo spreads beyond its black borders. I am drawn to the suggestion of structure, and yearn for the freedom to push beyond it.

Question for you: how does one even begin to find out?

I’m going to be away at Emerald City Comicon through the first week of March. So if you leave any comments, it may be a bit before I get to it. 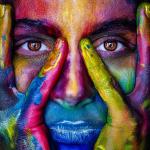 February 25, 2018
Searching for Color Under All This White
Next Post 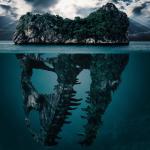 March 12, 2018 Approaching Witchcraft With Mental Illness
Recent Comments
1 Comment | Leave a Comment
"Pagans often treat (ancestral) cultures as trees with roots in lands, histories, and peoples connected ..."
Pitch313 Coloring Outside the Lines: Ancestry and ..."
"Just flicking through older posts here and I just wanted to throw in two things..1. ..."
David West Mental Health, Meditation, Witchcraft & Accountability
"I agree! Like on summer solstice or the like. Honestly, the wheel of the year ..."
K. C. Alexander Saying No to New Year Resolutions
"Making changes is hard in the darkest and coldest part of the year, as it ..."
Pennybird Saying No to New Year Resolutions
Browse Our Archives
get the latest from
Pagan
Sign up for our newsletter
POPULAR AT PATHEOS Pagan
1

5 Ways to Get Off of...
John Beckett
Related posts from Gone Witching