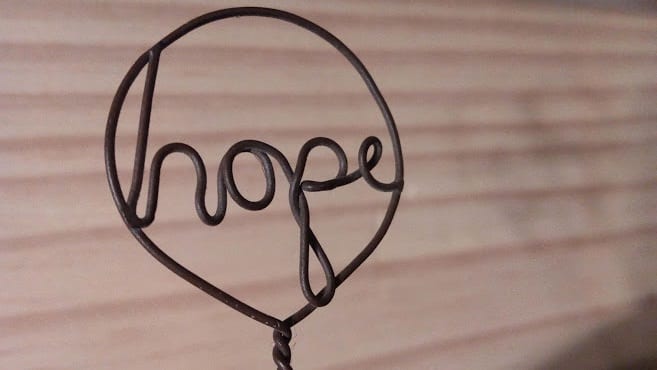 Last night, as we were sitting around the fireplace, reflecting back on the year that was, my wife, Wendy, found this little wire balloon with the word “Hope” inside of it. Our youngest son had found it on a walk a few weeks earlier and picked it up off the ground. It ended up on the fireplace near a few logs and sat there, unnoticed, until a few hours before the New Year began.

To be honest, I think I needed that little bit of hope to hold on to.

Especially since this year ended with Christians trying to convince us that Jesus would have applauded the fatal shooting of a gunman in a Texas church. [These same Christians also want it to be known that theirs is the true “religion of peace” compared to those violent, murdering Muslims who want to kill us and take away our freedoms, mind you].

For over 10 years now I have been trying to introduce Christians to Jesus. This topic of Nonviolence is one that has been one of the more difficult and pervasive discussions over that time. It seems that Christians are some of the most resistant to the notion that Jesus was a nonviolent Messiah who came to teach us to beat our swords into plowshares and study war no more.

This seemingly endless debate has led me to create a series of YouTube videos and podcast episodes about how there is no such thing as a “Gospel of Nonviolence” because the Gospel isn’t violent. It’s just the Gospel that Jesus preached, and it happens to hinge upon the notion that God is one who loves even those who hate and reject him, and therefore when/if we love our enemies we are also doing what our Father God does: Love those who don’t love us in return.

But, for some reason, Christians seem immune to this sort of thing. They want a kick-ass God and a bad-ass Jesus who will come back [soon] and slaughter those enemies to create a literal river of blood that will choke a horse.

So, this is why I have tried [and tried, and tried] to help Christians see Jesus for who he is: The Prince of Peace, whose birth was announced by a legion of angels proclaiming “Peace on Earth and Goodwill to all mankind”, who taught us to turn the other cheek, do good to those who hate us, overcome evil with good, put down our swords [or Glocks], and usher in the endless Kingdom of God where love really is more powerful than violence, and those who thirst for vengeance simply do not know what Spirit they are of.

But, if I’m honest, it’s getting really old.

I’m very tired of endlessly explaining that, no, Jesus did not use a whip against anyone when he drove out the animals from the Temple. [Go read the actual passage. It says he chased the animals with it, not people].

I’m so done trying to explain that, no, Jesus did not tell the disciples to “go and buy a sword” because he wanted them to use violence in self-defense. [Not sure? Notice how Jesus reacts when they try to use those swords to protect someone in self-defense.]

My fingers are tired of copying and pasting the words of the early Church Fathers who – for over 400 years – unanimously argued for Christians to refrain from violence and renounce military service and political office in favor of following Christ in his path of nonviolent enemy love.

I’ve even tried to explain that if those early Christians had been like us today, they would have killed Saul of Tarsus when he came after them, and then he would never have been converted by Christ and never have written most of our New Testament scriptures.

All to no avail.

So, I’m kinda tired of it all. And, apparently, I’m not the only one.

Over the last few days I’ve received several private messages from other authors and bloggers who shared with me very similar frustrations. Like this one I received from one friend just today:

“It seems that it is a near impossibility to get people in the church to understand that their personal opinions are inconsequential when they contradict Jesus. Honest to God, I am done trying to help them find Jesus when they so vehemently oppose him. Here’s to a new mission in 2020.”

Just a few days earlier I had started to wonder out loud if, after doing this for over a decade now, perhaps I should re-think my approach.

To be honest, part of this musing was sparked by a recent conversation I had with Derrick Day where he had mentioned wanting to stop using Scripture to make his points and start talking to people outside Christian circles.

The more I thought about that approach, the more I started to really love the idea of it. But, after mulling it over a few days I realized that – for me – that’s probably not going to work. At least, not right away.

Why? Because everything I’ve got to say is still based on the teachings of Jesus. If I take that away, I don’t have a lot to talk about, really. [Which is sort of ironic when you consider that my critics consider me some kind of heretic who hates God and doesn’t take the Bible seriously, etc.]

So, for now, I guess I’m stuck in this groove. This is my tribe. These are my monkeys. And I guess this sort of is my circus, like it or not.

That’s why finding that tiny wire balloon of “hope” last night was sort of a secret message from Jesus to me. At least, that’s how I took it.

I’ll hold on to that tiny wire of hope just a bit longer, I guess.

Let’s see where it takes me. 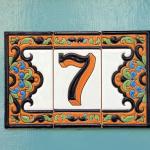 December 27, 2019
7 Examples Where God Forgives Sins Without Bloodshed
Next Post 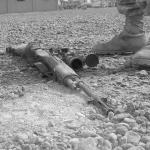 Congratulations, President Trump: You Got Your...
Freelance Christianity
Books by This Author Books by Keith Giles