Over on YouTube there is a new cottage industry on the rise. Conservative Evangelical Christians like Mike Winger, Alisa Childers, and others have made it their mission in life to demonize Progressive Christianity, insult those who are Deconstructing their faith, and create as much division as possible between themselves and everyone who doesn’t line up with their extremely narrow and inaccurate definitions of “Historic Christianity”, “Orthodoxy”, and “Biblical Truth.

Over the last few months – as my friends and followers here have made me aware of these videos – I have endeavored to respond with videos of my own to clarify what Progressives actually believe, reassure people that Deconstruction is actually an expression of faith rather than a denial of it, and (whenever possible) leave comments on said videos to help explain why and how Childers and Winger, etc., are misrepresenting those they consider “Progressive.”

One of the only rational voices in this ongoing “Us vs Them” video battle is Dr. Sean McDowell, the son of Josh McDowell who authored the apologetics classic “Evidence That Demands A Verdict.”

To his credit, Sean has interviewed at least one Progressive Christian pastor and did so with grace and tact. But, at the same time, he has also posted videos with titles like this one: “Are Progressive and Conservative Christianity Different Faiths? Yes!”

In response to this video, I recorded a video with my good friend, and fellow Heretic Happy Hour podcast co-host, Matthew Distefano.

But, after recording that response, I also reached out to Dr. Sean McDowell directly and urged him to stop posting videos that continually emphasize the differences between Evangelicals and Progressives, and instead to try to find common ground.

Here’s what I sent to him: 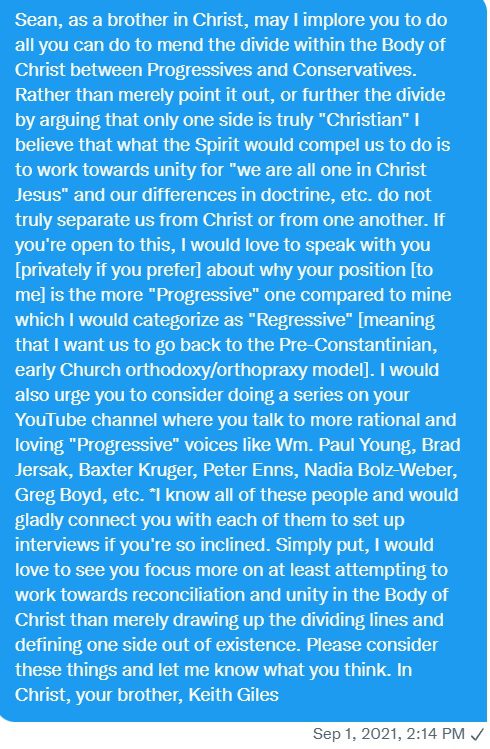 In response, Sean sent me back an encouraging reply:

As you can see, this exchange was almost a month ago.

Yesterday, I watched a new video posted to Sean’s channel where [once more, to his credit], attempted to address the question of whether or not the Bible refers to gay people as “abominations” [and his response was “no!”], but in his reply he posted something that I couldn’t help but find more than a little ironic, to say the least.

Here’s what he posted on his YouTube video concerning what the Bible refers to as “an abomination” [see if you can spot the irony here]: 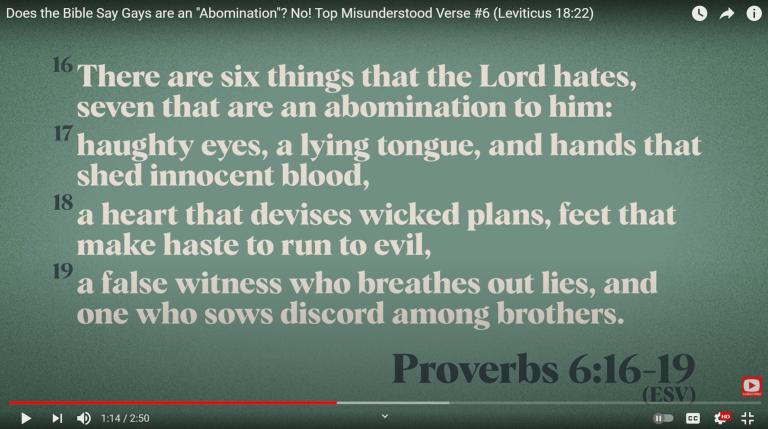 Did you see that final line at the very bottom? It says that one of the things the Lord hates and that are an abomination to him is this: “one who sows discord among brothers.”

Honestly, I didn’t even watch the rest of the video past this point. At 1:14 I hit pause and jumped back over to my message with Sean to try – once again – to get him to at least try to work towards reconciliation between Christian Conservatives and Christian Progressives.

Here’s what I sent to him: 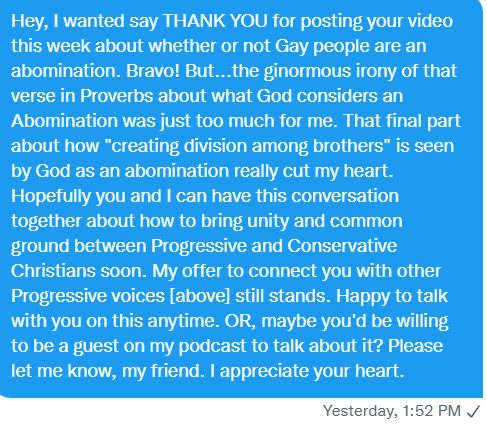 And, once again to his credit, Sean’s response was gracious, but sadly, still quite noncommital [so far]:

So, I’m still not sure if Sean is actually considering my request or my offer to have him be a guest on my podcast, or invite me to speak with him on his, or even one-on-one in private. But, I still believe that, if any such conversations between Progressives and Conservatives is ever to happen, it will most likely be Sean who leads the way. Why? Because, as I’ve already mentioned, Sean is the ONLY one of these voices who has ever responded to my messages, or replied to my comments or even acknowledged a voice that isn’t his own.

[NOTE: I have reached out on numerous occasions to both Mike Winger and Alisa Childers without any response or acknowledgment whatsoever].

My hope here is not to change Sean’s mind. What I DO hope for is to spark some constructive dialog between Progressives and Evangelicals that is actually helpful [rather than hurtful] and seek some level of reconciliation and [dare I say it?] unity between these diverse Christian groups.

See, it is my firm conviction that what makes us one in the Body of Christ is NOT agreement. In fact, Christians have almost never agreed on everything – even from the very beginning of the faith. Some Christians held very different books as Scripture for several hundred years prior to the Canonization of the Bible. Christians have held 3 different views of the doctrine of Hell from almost day one. Christians have championed a variety of Atonement theories over the centuries. The list could go on and on. But, none of those differences of theology have ever separated Christians in faith, because what makes us one – where our unity comes from – is simply Christ.

So, we are one in Christ – not in our doctrines, or opinions, or theology, or even in our practice. No, in those things we most certainly do not – and have never – had unity. And that is totally okay.

I mean, just look around you. Notice a universe and a creation that is marked by diversity, variety, and complexity. We do not live in a uniform world. We are surrounded by a breath-taking array of variously colored flowers, insects, and foliage. No two snowflakes are alike. Even human beings are gloriously unique from one another. Our faces, eyes, skin color, and fingerprints are what make us special, and beautiful.

Christians are not made one in their agreements. But, we are made one in Christ. This is what we hold in common.

What remains to be seen, however, is whether or not this is enough.

I believe that Christ is more than enough to keep all of us one in Christ. But, we have to be willing to stop continually focusing on all the ways we are different and begin to work together to see all the ways we are the same, and all of the beautiful things we have in common – and that one singular thing we as Christians have in common is Christ.

If you have any connection with people like Sean McDowell, or Alisa Childers, or Mike Winger, or any of these other Conservative Christians who have a large YouTube platform, I would like to ask you to please – kindly, lovingly, patiently – urge them to seek unity rather than to continually “sow discord among brothers”.

This abomination of divisiveness needs to stop. Families are being torn apart. Friendships are being ruined. Real, flesh-and-blood people are being deeply wounded by this constant barrage of accusation, guilt and shame.

I believe in bringing people together. I believe those who sow in peace will reap a harvest of righteousness.

I believe I have been given a ministry of reconciliation as an ambassador of Christ. I believe you have too.

Let’s get started on that work, shall we?

I’m ready whenever you are. But, I’m not going to wait for you. I’m going to get started today.

Keith Giles is the author of the best-selling “Jesus Un” series of books available on Kindle, Paperback and Audiobook at Amazon HERE> 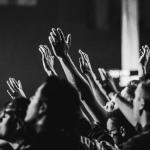 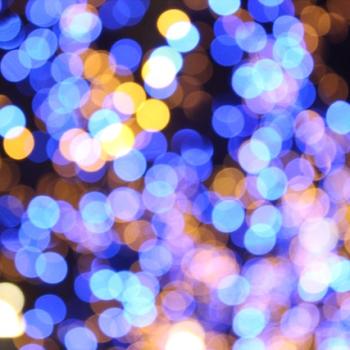 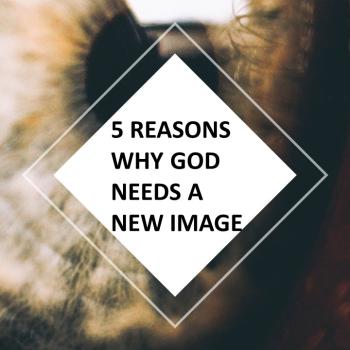