Pope Francis on coronavirus epidemic: Saint Peter was a desert 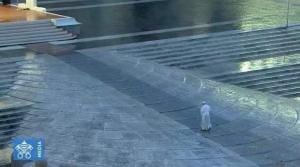 A Spanish journalist recently interviewed Pope Francis on Skype.  The journalist’s first comment made reference to the March 27th prayer service at Saint Peter Square.  “Yes, it was a desert,” Pope Francis responded.  The heartfelt and informal interview with a journalist Pope Francis appears to have known for quite some time covered a number of current topics.

Pope Francis praised healthcare workers.  “I admire them.  They teach me how to be committed.  I thank them for their testimony.  Physicians, nurses, volunteers who sleep on cots because there are no more beds in the hospital, and they cannot return home.  They are ‘saints living next door.’”

When asked what worries him the most about the current epidemic, his answer came quickly: “loneliness.”  Francis stressed how families have forgotten how to spend time together.  He believes however that during this time of quarantine, parents will listen to their children differently, they will play together and eat together.  They will have time to find each other again.  He also noted the presence of physical and verbal violence as some place blame on others for the epidemic.

“Are you an optimist?” the journalist asked.  He answered, “I don’t like that word.  Optimism is like makeup; a knee-jerk reaction.  I have hope.  Hope in humanity, in the men and women who make up humanity.  I have hope in people.  People who will learn new lessons from this crisis and will review their lives. We will come out of this better, less of us unfortunately, but I have faith that we will emerge better.”

The Pope and the journalist briefly discussed how many believed the virus would never affect them.  While the virus spread in Wuhan, China, people in Europe and other parts of the world paid little attention, but then the virus reached them. “Why do we think it will not happen to us?”  Pope Francis stated, ”it’s a defense mechanism.  We think the wolf is far away and will never reach us.”  They agreed that often the sin of pride is at play.  We falsely believe that calamity will not reach us.

The journalist inquired if during a situation like this one, it is possible for the faithful to have a crisis of faith.  He poses the direct question to the Pope, “can even a Pope have a crisis of faith?”  Pope Francis responds that evidently nobody is free from existential questions and temptations.  To the personal question he answers, “at times during my life yes, but right now, no.  Throughout my life I recall that I have had doubts of faith, a crisis, which I have resolved by the grace of God.”

In conclusion the journalist asks about the planet noting that as the human footprint has declined, many parts of the world find themselves cleaner and better.  The Pope notes that, “God always forgives, we forgive once in a while, but nature never forgives.”

The epidemic raises many questions and many are looking to Pope Francis as a spiritual world leader for answers.  During this interview he commented that oftentimes words are unable to console, but rather gestures speak more loudly than words.  He longs to make himself near to all those suffering and afraid.  I believe that the prayer service on Saint Peter Square on March 27th is evidence of his approach.  The gestures were spectacular.  The optics moving.  Yes, he spoke and filled the world with hope, but above all were his actions.  Nobody will forget Pope Francis blessing an empty Saint Peter Square with Jesus truly present in the Eucharist.  Nobody will forget the Pope walking toward the atrium of the Basilica alone.  His words and actions of comfort are reminders not only that he cares, but that Jesus Christ has not abandoned us.  As in plagues of the past, Jesus is near to strengthen and console us.

Saint Peter Square may have been a desert, but the hope of Christ filled it.  A hope that overflowed into the hearts of millions who watched.  A hope that has the power to moisten the desert of our hearts during a time of uncertainty and thirst for the sacraments. 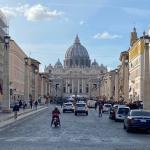 March 27, 2020
Words of Pope Francis at Prayer Vigil at Saint Peter
Next Post

April 2, 2020 In pandemic, Christ is near
Recent Comments
0 | Leave a Comment
Browse Our Archives
get the latest from
Labyrinthine Mind
Sign up for our newsletter
POPULAR AT PATHEOS Catholic
1

If You're Angry About the Looting...
Steel Magnificat
Related posts from Labyrinthine Mind 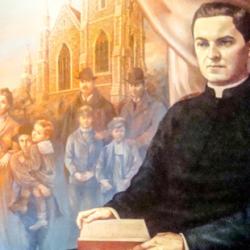