Reflecting on the Priesthood 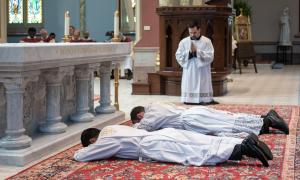 This year I celebrated my priesthood anniversary in quite a unique manner: by participating in the ordination of the two newest priests of our diocese, Father Robert Phillips and Father Carlos Rivero.  After Bishop Hartmayer was appointed Archbishop of Atlanta in March, the first thing I inquired when I met his new assistant was if he could return to Savannah to ordain our deacons and priests.  I was very happy to learn he would be able to return.

As Vocation Director, it is particularly exciting and rewarding to present the candidates to the ordaining Bishop.  At every ordination for the past six years I have addressed Bishop Hartmayer with these words after the candidates for ordination stand, “Most Reverend Father, holy mother Church asks you to ordain these, our brothers, to the responsibility of the Priesthood,” to which he responds, “Do you know them to be worthy?” I then reply, “After inquiry among the Christian people and upon the recommendation of those responsible, I testify that they have been found worthy.”  The Bishop then states to reaffirm the call of Christ in the lives of the candidates, “Relying on the help of the Lord God and our Savior Jesus Christ, we choose these men, our brothers, for the Order of the Priesthood.”  The faithful gathered respond to this dialogue with a roaring applause.

After years of anticipation and preparation in the seminary, the sacred rites of the Church seem to thrust suddenly the Priesthood on the new priest. As a newly ordained priest, I recall thinking how surprised I was that the priesthood arrived all of a sudden.  I walked into the cathedral as a seminarian and two hours later walked out as a priest.  I stated in an interview a few weeks after my ordination in 2009, “It is very awe-inspiring and humbling.  All of the sudden you are ‘Father,’ the priest.  You kind of have to get used to it.”

Attending the ordination and reading the brief interview that evening allowed me to savor once again that significant day of my life when I made the greatest commitment I will ever make.  I was filled with such much pride to see both Robert and Carlos finally vested in white chasubles; both of them beamed with joy.  I remembered how the seminary prepared me with much knowledge, academics, and the development of good spiritual habits, but that very little in my seven year seminary formation truly prepared me for the challenge and privilege of being a priest.  I remembered how the priesthood is something you are given, not something you earn.  As a man, the priest gets inserted into the eternal Priesthood of Jesus Christ and becomes part of something much greater than he could ever be alone.

Picture from The Southern Cross.  Used with permission. 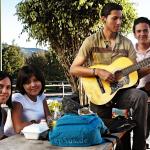 July 5, 2020 Reflexión sobre el Sacerdocio
Recent Comments
0 | Leave a Comment
Browse Our Archives
get the latest from
Labyrinthine Mind
Sign up for our newsletter
POPULAR AT PATHEOS Catholic
1

Toxic Masculinity: What It Is, and...
suspended in her jar
Related posts from Labyrinthine Mind 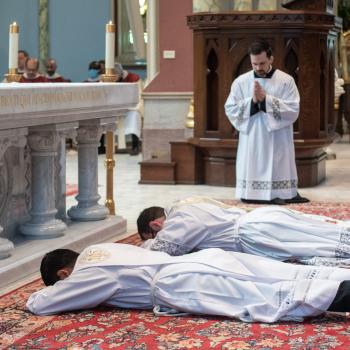