Did God Tell A Local Man To Calm Down?

Did God Tell A Local Man To Calm Down? September 6, 2017 Andrew Hall

Warren Moody, a 34-year-old part-time school bus driver and full-time church elder, received a divine vision from the Almighty informing him to sit in a dark room, turn on that soft rock station on the radio, and calm the fuck down.

Friends report that Warren was freaking out over the latest example of “those people not respecting America” so much that he couldn’t even drink his bottle of SunnyD.

“He was on a rant. Warren loves a good rant. That’s why he was voted Most Likely to have a Stroke in high school,” reported long time friend Andrew Canard.

The revelation occurred in the fast checkout lane at the local Stop and Save. Apparently, the school bus driver became incensed over a story in the local newspaper about the high school’s Christmas concert being changed to a Holiday concert. That bit of information triggered Warren.

“I just happened to be in the line next to him with our mutual friend, Ringworm Pete,” Mr. Canard relayed. “At first we thought Warren was yelling at the security camera again. It wasn’t until he started strangling the newspaper it was clear the guy lost his marbles.”

Penelope Jordan, the 16-year-old fast lane cashier, prepared for the worst as the enraged customer approached.

And then the miracle occurred.

The infuriated man stopped assaulting the newspaper. His shouting about Muslims, atheists, and Presbyterians ceased. The hand of God touched him, and Warren stared off at the piles of dog food by the windows.

But Warren didn’t see bags of Alpo or Mutt Stuffins. He saw God.

When Warren came out of his reverie, he calmly told all who would listen that Jesus had ordered him to go home and calm down via a dark room and EaZy 106.7 FM. He was also told he didn’t have to pay for the bottle of SunnyD.

And Warren obeyed the LORD.

Penelope Jordan thanked God for sparing her from the onslaught from one of His followers. Mr. Canard and Ringworm Pete were a bit more skeptical. “We’re bringing Warren to the neurologist. A lot of God’s messages are probably snapchats from brain tumors,” Mr. Canard mused. 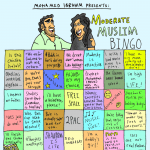 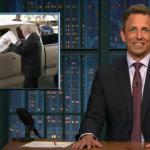