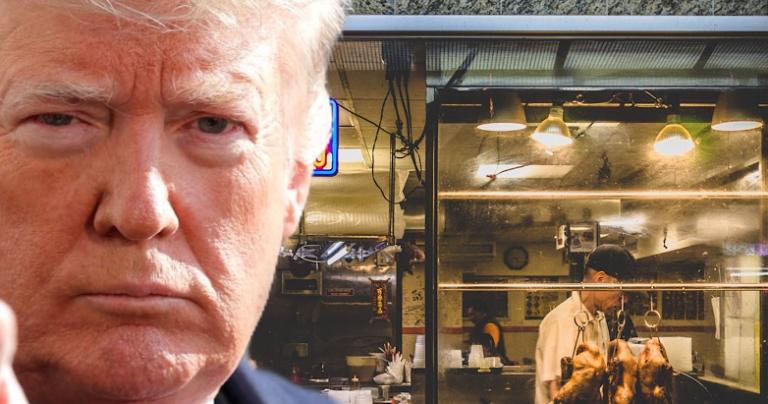 Washington DC – President Trump addressed the country last night about the need for a border wall with Mexico. He made what many consider to be an awkward attempt to make his case to the American people. His presentation was stilted, wooden, and had none of the unhinged flair Trump’s supporters have come to expect.

They did not need to wait for long before Trump reverted back to form.

Within minutes of ending his border wall appeal, the commander-in-chief took to Twitter to talk about the trade war with China. Not only did he call for more tariffs, but he urged Americans to boycott Chinese restaurants. 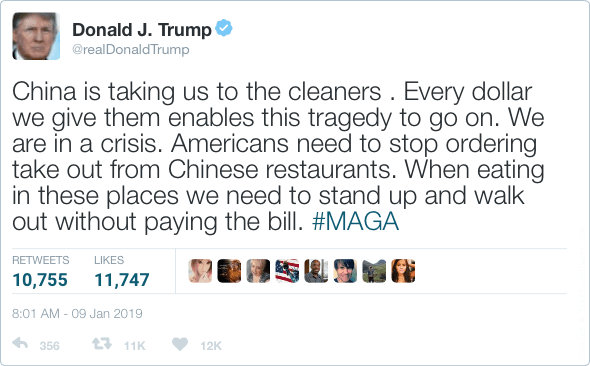 China is taking us to the cleaners. Every dollar we give them enables this tragedy to go on. We are in a crisis. Americans need to stop ordering take out from Chinese restaurants. When eating in these places we need to stand up and walk out without paying the bill. #MAGA

President Trump continued to tweet he understood Americans are going to feel the pain from the embargo of Chinese restaurants, but we all need to stand firm: 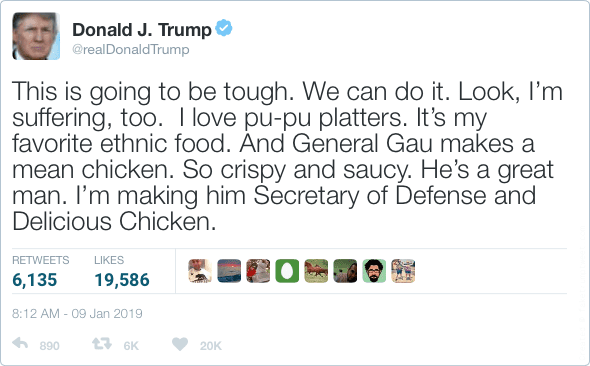 This is going to be tough. We can do it. Look, I’m suffering, too. I love pu-pu platters. It’s my favorite ethnic food. And General Gau makes a mean chicken. So crispy and saucy. He’s a great man. I’m making him Secretary of Defense and Delicious Chicken.

Republican senators are lining up behind Trump and his Chinese restaurant boycott. One senator experimented with making a pu-pu platter out of Chicken McNuggets, French fries, and sweet sauce. Inside sources say the procedure to pump his stomach went well and he should be out of hospital shortly.

January 8, 2019
The NRA Agrees To Build Trump’s Wall
Next Post

January 10, 2019 Donald Trump Jr Turns Immigrant Detention Centers Into Zoos
Recent Comments
0 | Leave a Comment
"Tucks is pond-scum. Why are you trying to humanize him?! /s"
Raging Bee Tucker Carlson’s Sex Dungeon Discovered
"All joking aside, one very strong piece of evidence that the Holocaust happened is that ..."
Michael Neville Texas Update: 10 Proposed Books To ..."
"Well, I liked the special; thought it was funny. Although I did find some parts ..."
3vil5triker . Dave Chappelle Is Not Transphobic – ..."
"I try my best."
Andrew Hall Dave Chappelle Is Not Transphobic – ..."
Browse Our Archives
get the latest updates from
Laughing in Disbelief
and the Patheos
Nonreligious
Channel
POPULAR AT PATHEOS Nonreligious
1