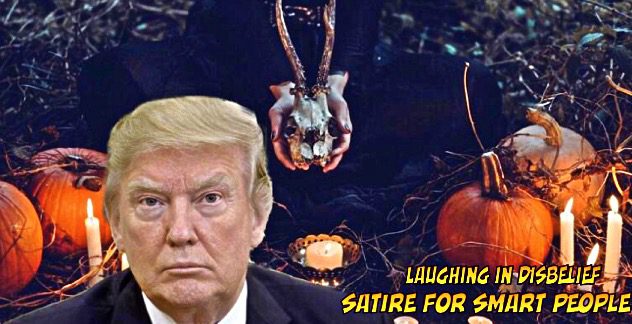 Washington DC – President Trump went on Twitter today, and ranted about the clear and present dangers no one is talking about — witches, socialism, and sea otters. 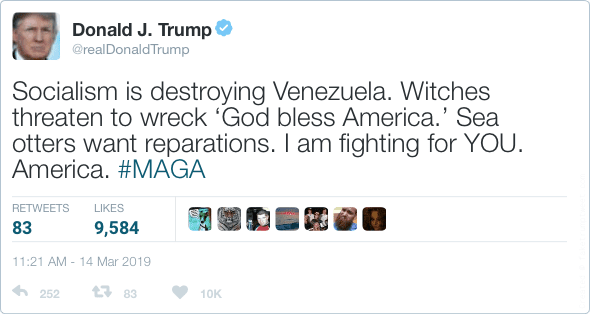 Many political insiders believe Trump is buckling under pressure. Politico reports how Republican lawmakers are taking a stand against the commander-in-chief:

After more than two years of keeping his veto pen capped, Trump is going to have to put it to use — twice — courtesy of Republicans. In a remarkable bit of timing, the Senate will hold two votes this week placing GOP senators at odds with the president on foreign and domestic policy, likely forcing the first vetoes of his presidency.

The issues at hand are Trump’s emergency edict to funnel money into his border wall and the conflict raging in Yemen.

It’s “extraordinary” to see Congress working to claw back power from the executive branch in a matter of days, said Sen. Rand Paul (R-Ky.), who will vote with Democrats and a handful of Republicans to form a bipartisan majority to try to handcuff Trump on both issues.

Many in Trump’s evangelical base are excited about having a public conversation about witches. Time and time again evangelical leaders screamed into the darkness on how witches poison wells and make Christian men have gay erections.

And sea otters? Those happy mammals who like to frolic in the water? No one knows what the connection is between otters and reparations. However, Trump supporters are already forming anti-otter militias to take on the threat.

”President Trump says we have to get tough with Democrats and otters,” stated MAGA fan Billy ‘Butter Tub’ McKing. “That’s good enough for me.”

March 17, 2019 Trump Budget To Fund Faith-Based Scientific Research
Recent Comments
0 | Leave a Comment
"this is disgusting. Why is it even on Patheos?"
JenellYB ‘Joseph Masturbated In The Corner, Too’ ..."
"What kind of a person bandies a fallacy about as if it were an effective ..."
CVP Hot Woman Attacks Cold Satanic Beer?
"Later that same day, a Vatican legate grabs the mic and popesplains something to the ..."
TheBookOfDavid Pope Francis Calls for Same-Sex Unions ..."
"This is from a "satire" site Patheos maintains."
David Crass ‘Joseph Masturbated In The Corner, Too’ ..."
Browse Our Archives
get the latest from
Laughing in Disbelief
Sign up for our newsletter
POPULAR AT PATHEOS Nonreligious
1