Heaven Is Desegregated And White Evangelicals Are Rioting

Heaven – White evangelicals are rioting in the Kingdom of Heaven due to God’s recent decision to racially integrate the divine realm.

Archangels report the situation is totally out of hand. Angry mobs are destroying property, looting, and chanting “We will not be replaced.” Several spirits were rushed to the Abode of the Saints Metaphysical Healing Center for damaged deeply held beliefs.

The riots started within minutes of God, The Tamer of Leviathan and LORD, announced He was integrating ALL of Heaven:

Hey, Kids. Let me make this short because the more I talk the less time I have luxuriating in my hot tub of your thoughts, prayers, and worship. Big Daddy is doing away with Mexican Heaven, Anglo-Saxon Heaven, Mexican Countries Heaven, All Good Dogs Heaven, Cat Heaven, Jewish Heaven, Canadian Heaven, well, I think you get the idea. I’m mashing them up into one big City of God. You won’t need a passport anymore to get authentic ethnic cuisine. It’s all good.

Now, go back to enjoying infinity. How about thanking me a few times for making hot pots so accessible?

Some white evangelicals didn’t hear the LORD’s statement. Some were blasting Toby Keith’s I Love This Bar through their airpods while others were busy arguing on how much mild salsa is ideal to add to mayonnaise. It was clear who wasn’t paying attention.

“I’ve been here since the beginning of time,” Archangel Andrew Canard stated. “I’ve never experienced so many scared and outraged beings. The Reformation wasn’t this tough.”

“Do you know what irritates white evangelicals? Change.” Archangel Canard quipped. “It bugs them more than CNN.”

Many brown and black skinned spirits aren’t surprised. What struck most as odd is how white evangelicals got into heaven in the first place. Some believe Hell was overcrowded while others think they were grandfathered in.

“As soon as Heavenly Father said things were going to change, I nailed the doors shut and boarded up my windows,” one spirit who once lived in Miami said. “I lived through the Obama Presidency and the Tea Party. This was predictable.”

Archangels are informing those spirits to shelter in place until the situation is under control.

The Devil is officially offering to assist Heavenly authorities with handling the situation. Insiders point out Lucifer does not want white evangelicals in Hades. Offering assistance may be his way of keeping them in the Kingdom of Heaven.

Right now no one knows how the crisis will end.

Rumors report God is considering a tax cut to mollify the idiots.

Left of Center is a fun Facebook group for people who are politically left of center. Check it out! 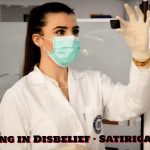 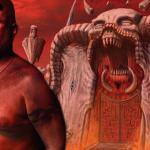 April 16, 2019 The Devil Releases A Press Release On The Notre Dame Fire
Recent Comments
0 | Leave a Comment
Browse Our Archives
get the latest from
Laughing in Disbelief
Sign up for our newsletter
POPULAR AT PATHEOS Nonreligious
1