UPDATE: The 2nd Amendment Is In Hiding

UPDATE: The 2nd Amendment Is In Hiding September 13, 2019 Andrew Hall

The 2nd Amendment of the Constitution of the United States of America is in hiding. The amendment for a well-regulated militia hasn’t been seen for days. Friends and family are concerned and hope the amendment responsible for mass shootings, suicides, and accidentally getting shot in the testicles comes home soon.

”He saw the writing on the wall,” said one friend. “Once Beto O’Rourke said he was coming for AR-15s and AK-47s, he knew it was only a matter of time before Democrats float the idea of passing an amendment to kill him.”

Many pundits say repealing the 2nd Amendment is an absurd idea. However, Americans of a certain age remember when gay marriage, a Black president, and marijuana legalization seemed like pipe dreams, too.

Professor Allan Lichtman teaches at American University. He has successfully predicted presidential elections since 1984. He’s all in for repealing the 2nd Amendment. He pointed out on the Naked Diner Podcast many people thought undoing Prohibition was impossible. And yet a constitutional amendment passed repealing it.

Professor Lichtman also pointed out the NRA is under siege financially. Without the NRA to protect it, the 2nd Amendment may crumble quickly.

”It turns out Democrats just need to lead,” snarked Naked Diner cohost Andrew Hall. “We could be witnessing the beginning of the end for out of control gun ownership in the United States.”

Evangelicals are banding together. They are creating teams of prayer warriors to send all of their thoughts and prayers to Jesus’ favorite piece of legislation.

Will thoughts and prayers work?

Buy this here and get free shipping in the US for a limited time only. Type in the code CANARD at checkout. 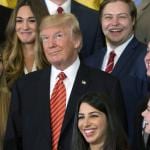 September 15, 2019 Franklin Graham’s Penis' Love Letters To Pete Buttigieg Go Unanswered
Recent Comments
0 | Leave a Comment
"Can he still get a credit card from Deutsche Bank?"
Raging Bee Coke Cancels Donald Trump’s Coca-Cola Black ..."
"Saw this Matt Gaetz story so I'll re-post this from another Patheos NR site:Another example ..."
skl Teen Vogue Cancels Representative Matt Gaetz’s ..."
"Verily I say unto ye, it'll be off to Hell for him, eh. If he ..."
Gord O'Mitey ‘Bury Your Bibles!’ Says Mike Lindell
"Oh Mikey, I have some very good friends who are BLM supporters who have better ..."
IamAnn IWearAMask ‘Bury Your Bibles!’ Says Mike Lindell
Browse Our Archives
get the latest from
Laughing in Disbelief
Sign up for our newsletter
POPULAR AT PATHEOS Nonreligious
1