Washington DC-  President Trump is facing bankruptcy. The man who refuses to release his tax records is doing so for a good reason. He’s embarrassed by the way he’s been able to lose money hand over fist over decades. However, there is a bright light at the end of the Trump’s fiscal tunnel. Wife Melania’s cam girl side hustle is raking in the millions.

“Camming is a lot safer than traditional sex work,” admits the First Lady of the United States (FLOTUS). “There’s absolutely no danger. I can do it from the Lincoln bedroom.”

No one is surprised Donald Trump is hovering near insolvency. With a history of Trump steaks, Trump wine, and Trump casinos under his belt many felt it was a matter of time before he lost it all.

Melania launched her site First Lady Confessions And Sex a few days ago. Millions of MAGA men immediately signed up.

But what are FLOTUS’ fans really getting from their cam girl?

Melania’s manager, Eric Trump, points out all the benefits.

Friends close to Melania states she starts camming at 5 am and is done by 10 am. She rakes in so much money, she doesn’t have to do more than that.

American evangelicals are applauding FLOTUS’ gung-ho attitude. Their deal with the Devil for Supreme Court Justices explicitly states they have to support whatever craziness comes out of the White House.

In related news, President Trump gets kicked out of Boston’s Children’s’ Hospital. 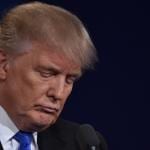 May 20, 2020
President Trump Expelled From Children's Hospital
Next Post

May 22, 2020 White House States Donald Trump Can Bend Time And Space
Recent Comments
0 | Leave a Comment
Browse Our Archives
get the latest updates from
Laughing in Disbelief
and the Patheos
Nonreligious
Channel
POPULAR AT PATHEOS Nonreligious
1