Atlanta, Georgia – The Centers for Disease Control and Prevention (CDC) has its hands full with the coronavirus pandemic. The agency responsible for safeguarding the public health of the United States is doing its best.

While COVID-19 is the CDC’s main area of focus, other health threats are still out there. An anonymous source high up in the organization leaked documents depicting a virulent strain of toxic stupidity running rampant in the country. This pathogen is so widespread that it affects every single American in some way. If a person does not have this idiocy, then they are still affected by it.

“Because that’s how virulent dumb works,” the anonymous source said. “In any population, once a certain amount of people are infected they seize the centers of power and drag everyone down with them.”

All information points to one man being patient zero for this outbreak. Not only was he the source of the intelligence numbing effect, but he is still at large on Twitter, FOX News, and the Executive Branch of the federal government.

Unsurprisingly, the White House had done its best to bury this information. Not only is the data about the pandemic silenced, but patient zero has their with propaganda polluting the body politic with mottos like “smart is dumb,” “four legs bad, two legs good,” and “Making America Great Again!”

Unknown to Americans until now is how the World Health Organization is working on a vaccine for American politics. The leaked information has this to say about it.

The toxic effects of American Politics are growing, experts argue. With other countries suffering maladies like Russian Explosive Disorder, Syrian Syphilis, and Pakistani Schizophreniathe world’s immune system is weakening. There are real fears among doctors that a tipping point will be reached and the world will fall into a Mississippi-like state.

“Authoritarianism is the end product of American Politics,” stated an anonymous member of WHO. “What we have to do at the very least is keep the disease from spreading to those who are healthy.”

While the future is uncertain, there is a real chance the amount of toxic stupidity within the United States will decrease after the next Presidential election.

May 22, 2020
White House States Donald Trump Can Bend Time And Space
Next Post 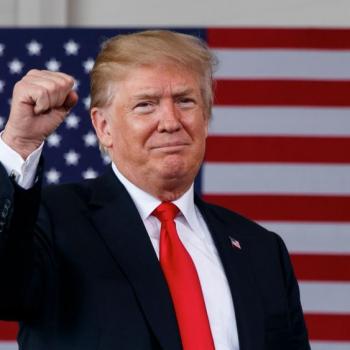