Cambridge, MA – The small pharmaceutical company LiFeGen just published findings from its most recent clinical trials on the Alzheimer’s drug Educanumab. The results show that the drug slows the creation of amyloid proteins in the brain that are thought to cause cognitive deterioration as well as “clean up” the amyloid proteins that are already present. What no one expected, however, is that the patients in the clinical trial who responded to the drug became atheists.

“After two weeks of taking Educanumab, patient 32’s caretakers discovered him reading Richard Dawkin’s The God Delusion. Patient 32 was a lifelong elder in his church before treatment,” stated Professor Andrew Canard. “The individual was writing notes in the margins and reportedly mumbling, ‘I can’t believe I fell for all that hooey'”

As cognitive functioning increased under treatment, so did the overall quality of life for patients. Individuals were observed throwing away religious fliers received in the mail that asked DO YOU KNOW HELL IS REAL? The amount of money given to television evangelists plummeted.

While old faith-based behaviors vanished, new attitudes and activities emerged. A vast majority of the patients (88%) placed Good Without God signs in their front yards. Those who once demonstrated homophobic tendencies did a 180-degree turn and became advocates for the LGBTQ community. All who responded to the drug were able to identify racist “dog whistles” in the media and showed an appropriate level of disdain for the demagogues who use them.

Many conservative church leaders and their followers are enraged at yet another attack on Bronze Age beliefs by science. And they’re not taking this lying down. Tens of protesters stood in front of LiFeGen to put the “heathens” on notice.

“First, science says the Earth isn’t the center of the universe. Second, science says extra-crispy Kentucky Fried Chicken and Mountain Dew will kill you. Now, this. Enough is enough!” shouted Reverend Dan Gamecock of the First Avenue Baptist Church of Brockton, MA. “We will not be canceled by the recently woke!”

When asked what his demands were, Reverend Gamecock stated that there had to be a way to fight cognitive impairment without sacrificing faith. If Alzheimer’s disease can’t be stopped without killing the Jesus living in patients’ hearts, then the drug wasn’t worth it. “Better to sacrifice a part of the body then let the entire person burn in hell for eternity,” he stated.

The next step for Educanumab is a study that incorporates thousands of patients. The research team is hopeful that they will be able to replicate previous findings. If not, it’s back to the drawing board. “The good thing about science is that allows you to change your opinions based on the evidence. Maybe that’s what religious conservatives are mad about,” Professor Canard mused. 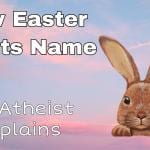 March 21, 2021 How did Easter get its name? - Atheists Discuss Theories
Recent Comments
0 | Leave a Comment
Browse Our Archives
get the latest from
Laughing in Disbelief
Sign up for our newsletter
POPULAR AT PATHEOS Nonreligious
1