Maricopa County, Arizona – The election audit of the 2.1 million votes from the 2020 presidential election stopped today because GOP observers couldn’t count above the number five. Although Cyber Ninjas, the company hired to do the audit, is ready to continue the job the process has ground to a halt.

On the scene sources say there is chaos and confusion in Veterans Memorial Stadium where the audit is supposed to occur. “We had a few observers who were able to count really high, like up to twenty,” one anonymous ninja admitted. “But they all got COVID so now we’re left with the second string.”

Many wonder why the Republicans present can’t get up to at least ten. After all, even children can use their fingers on both hands to do that. However, it appears there is difficulty making the transition from counting on the left hand and continuing on the right. Time after time when an observer gets to five they get angrier and angrier and then yell, “It’s a conspiracy! Trump won!”

The Solution For Republican Observers

GOP state senator Andrew Canard has a simple solution — declare Donald J. Trump King of America. He believes with a chief executive for life there won’t be any issues counting votes ever again. Other Republican state lawmakers believe he’s on the right track. A vote on declaring Trump King of Arizona is being taken up in committee and expected to come up for a general vote soon. Until then, “real Americans” will just have to wait for a number of days that is greater than five.

And that get’s them mad.

In related news, Donald Trump to use a stupid tactic for his legal defense.

May 20, 2021
Trump's Defense Lawyer 'He's Too Stupid To Take Seriously'
Next Post 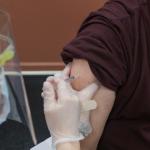 May 22, 2021 How To Get More People Vaccinated -- Ohio Shows Us
Recent Comments
0 | Leave a Comment
Browse Our Archives
get the latest updates from
Laughing in Disbelief
and the Patheos
Nonreligious
Channel
POPULAR AT PATHEOS Nonreligious
1