FOX News is planning to Americanize the weather. Rupert Murdoch unveiled plans to create FOX Weather, a 24-hour station dedicated to “weather science and not climate change.” The new channel plans to dethrone the Weather Channel as the #1 source of entertainment for elderly voters.

Professor Andrew Canard teaches Political Science at the Theological Institute of Technology (T.I.T.). He’s authored books like The Republican War Against Teletubbies and Evangelical Bingo: How Trump Became Christ. Professor Canard believes FOX Weather may win elections for the GOP. “Rapacious capitalists created the climate crisis. Their industries injected greenhouse gasses into the atmosphere for decades,” he said. “And now we have increased temperatures and extreme weather. FOX hopes to cash in on the disaster they made. They will attack the very idea of man-made climate change while profiting from it.”

Marjorie Taylor Greene is the representative from Georgia’s 14th congressional district. She’s been a firm supporter of former President Trump, QAnon conspiracies, and Jewish space lasers for quite some time. Anonymous sources within FOX state she’s going to be one of the many conservative icons to inform viewers about the weather as well as how Democrats are destroying America.

Representative Greene’s office confirmed the rumors. In an official statement, she communicated that she has signed a contract committing her to be the far right’s weather girl. Her appearances will center around weather-related disasters. While the Weather Channel promotes “fake news” she will tell the truth. For example, she’s proposing a whole new classification of hurricanes. Instead of using the Saffir-Simpson scale ranges from a category 1 to a category 5, she will use terms like category AOC and category Homosexuality is a Sin.

FOX News personalities plan to do guest spots on FOX Weather. Tucker Carlson and Sean Hannity have already signed deals. Russian President Vladimir Putin may pop on occasionally and tell conservatives how American weather can be made better with nesting dolls.

In related news, Marjorie Taylor Greene got lost on her way to the Holocaust Museum. 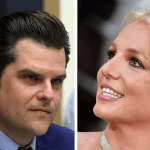 July 6, 2021
Matt Gaetz Asks Britney Spears Out On A Date
Next Post 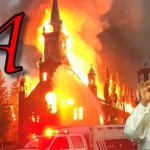