QAnon conspiracist Marjorie Taylor Greene appears to have a lock on retaining her seat in Georgia’s 13th district. Although she is reviled by many throughout the United States as toxically unstable, her fanbase loves her.

However, politics are fickle. Today’s hero becomes tomorrow’s failure if a challenger emerges who is able to capture the hearts and dreams of voters.

Marjorie Taylor Greene’s uterus made it official yesterday evening at a press conference in the city of Chattanooga, GA. The uterus was leading the charge against critical race theory (CRT) at a school committee meeting. A mob of angry white people was shouting You will not replace us! and Blood and soil! due to history teachers teaching history. As the committee members filed out of the room, the uterus took the microphone and declared her candidacy.

“Blood and soil and Donald Trump’s nasal nose hairs, I’m running to be your representative!” she yelled. “I’m the true conservative in this race! Let me be the baby maker of freedom!”

Greene’s uterus then launched on the 5 points she plans to run on:

Representative Greene’s office has yet to officially respond to the challenger. 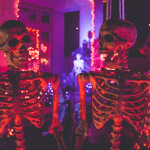