One of my aims for this blog is to promote understanding of what Christian fundamentalists believe. There is very little knowledge in the UK of this type of belief, either in terms of what it entails, or how many people hold these views.

Communication between fundamentalists and society at large is very difficult, because there are irreconcilible differences in their respective uses of language. For example, let’s look at two adjectives: “liberal,” and “secular.”

Many moderate advocates of a tolerant, pluralist society use these terms. “Liberal,” to these people, means broad-minded, free from bigotry, avoiding dogma, and willing to consider all ideas.

My Accelerated Christian Education schoolbook, on the other hand, said that liberals are those who “reject God’s absolutes.” Every time the word was used in an ACE text, it was to denote the opposite of godliness, and I inferred from context that liberal equated to evil.

“Secular,” to our impartial observer, has a connotation of neutrality. It means not concerned with or related to religion; having no particular religious affinities.

Unfortunately, the Christian fundamentalist rejects the idea that neutrality is possible, and in particular, that neutrality of education is possible. As a comment on my old blog put it, “all institutional schools indoctrinate something.” You may have heard references to “strident secularism” from within the church, a charge which makes little sense using the dictionary definition of “secular.”

You’re Either For Us Or Agin Us

The reason for this is simple: Jesus said in Matthew 12:30 (and Luke 11:23), “He that is not with me is against me.” As far as Biblical literalists are concerned, if you’re not preaching Jesus, you’re pushing the devil’s agenda.

In her PhD thesis for the University of Warwick, Sylvia Baker of the Christian Schools Trust argues, citing an array of Christian sources, that “all schools are in a sense religious.” She quotes (pg. 26) Terence Copley’s Indoctrination, Education, and God, which argues that “indoctrination by omission” is possible: that not mentioning God in the classroom is a form of brain-washing:

A child from a home in which religion and God are never mentioned and encountering a curriculum in which they do not occur, except perhaps, en passant in history lessons, may not only have no belief in God, but may view the entire question of God as unnecessary and irrelevant, even incomprehensible. How much “choice” has such a child had in forming this view? … Surely this too is indoctrination.

Observe this table, presented by Baker, from the Christian Schools Trust, an association of around 40 British Christian schools. It demonstrates their perceived difference between Christian and secular education. Note particularly that it suggests, among other things, that humanism is a faith, and that evolution is at odds with Christian education, and that secular education automatically leads to hopelessness and disillusionment. 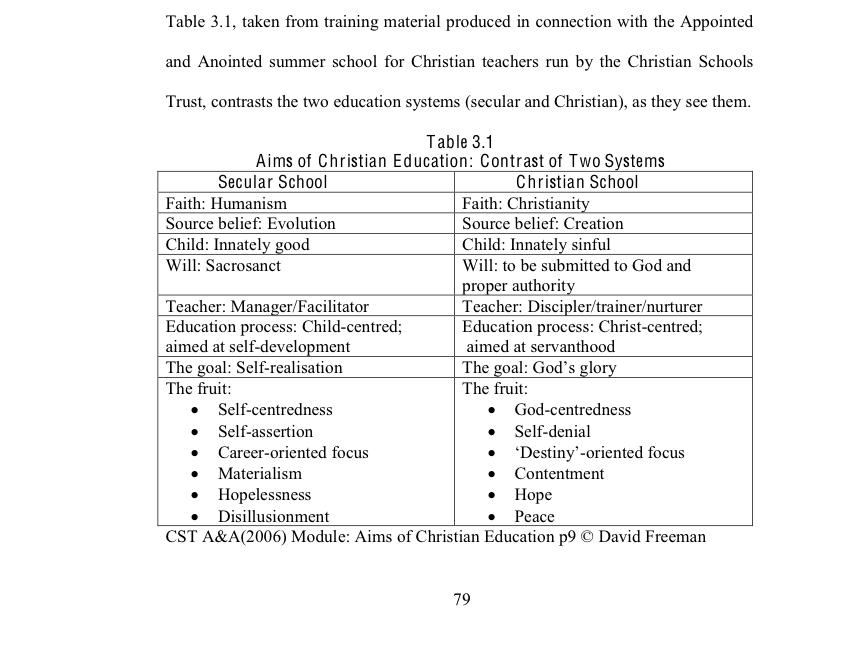 The institutions Baker calls “the new Christian schools” seek to ensure that their pupils “develop and retain the belief system and moral position taken by their parent bodies and founding churches.” The Christian school I attended went further and sought to teach me the “right” views on history, politics, Biblical criticism, and even the arts.

These are questions to which there is not one right answer, or if there is, no human can claim to know it with certainty. It follows, then, that the most ethical course must be not to tell children what to believe in this instance, but to give them the tools to make up their own mind.

Education has no business teaching children what to think. It should only teach them how to think.

I am not talking here about the home. I am not claiming that parents should not have the right to pass on their beliefs to their children. I am talking about schools. The purpose of education must be for students to learn how to acquire and evaluate knowledge. To teach children what to believe, rather than to teach them about beliefs, is immoral. The New Christian Schools supporters won’t accept this, because they believe an education without God is, in effect, educating children into atheism.

Interestingly, both critics and supporters of this type of education maintain that without this instruction children are more likely to stray from faith. Richard Dawkins, in his article Viruses of the Mind, makes the same point as Sylvia Baker’s Christian schools. Opponents of this very directive kind of Christian education decry it for exactly the same reason its supporters want it.

The following is the most important realisation I have ever had:

The truth has nothing to fear from inquiry.

Fair-minded people of all faiths know this is right. Jesus said “the truth shall set you free.” There is simply no need for education to indoctrinate. What is true will stand up to scrutiny. Understanding and respect, on the other hand, only come from meeting people with different ideas. Schools that select by faith and teach a “correct” spiritual line, then, are unnecessary, and cost us the opportunity to educate children to engage meaningfully with ideas they do not share.

April 30, 2012 The Scientific Method According to Accelerated Christian Education
Recent Comments
0 | Leave a Comment
"While it sounds like he has switched to the church of the Daily Show, he ..."
D'artagnan An atheist wrote the theme tune ..."
"I wish I knew about this blog years ago. I'm glad it's still here. Thank ..."
Ralph Facter It’s time to move on from ..."
"Gibbs III is also responsible for the ludicrous 'Terri Schiavo has changed her mind!' argument. ..."
Astrin Ymris The Fixer: Christian lawyer’s history defending ..."
"ACE does not control any of these schools. ACE only provides the curriculum and program. ..."
mccartherable . Top 3 ACE School of Tomorrow ..."
Browse Our Archives
get the latest from
Nonreligious
Sign up for our newsletter
POPULAR AT PATHEOS Nonreligious
1