Well, that was quick.

For those not playing along, last Friday I posted an open letter to Christian Education Europe. Arthur Roderick replied almost by way of post.

UPDATE: On the advice of the author of jesusandmo.net, I have taken down Arthur Roderick’s letter. I was working on the assumption that, since I told him I would be posting my letter online, he would realise that I would post his, too. It occurs to me that this is not a watertight defence. Since it’s illegal to publish private letters without permission, I am trying to get his express consent. I apologise that the rest of this post makes much less sense without it. I will post an extra blog tomorrow to compensate for your undoubted misery.

In the meantime, since the author was so kind as to warn me that I was breaking the law, why don’t you check out one of his highly amusing (and highly relevant) comics: 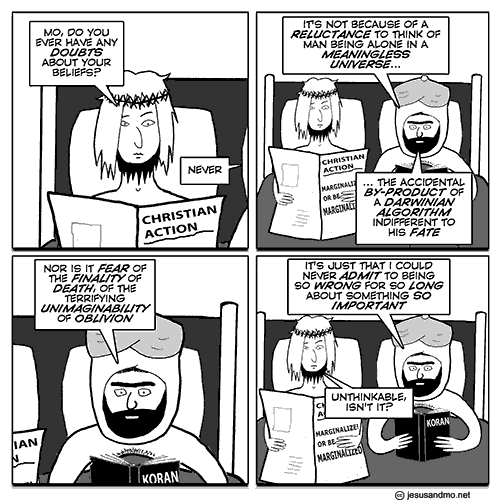 I will reply, as I am grateful that Mr. Roderick took the time to reply to me at all, but it’s not a heartening response. I find it hard to engage with someone who provides anecdotes in response to criticisms of a science curriculum (By the way, if anybody out there truly loves me, buy me a T-shirt that says “The plural of ‘anecdote’ is not ‘data'”).

By my count, seven of the sentences in that letter actually respond to points I raised, and the rest is flannel.

I particularly object to the argument about his son being deprived of oxygen at birth. I’m very sad to hear this; I did not know. It is not of any relevance to my case, though, and rebutting that argument is difficult without looking like a heartless bastard.

But I’m not in the business of making myself popular with Creationists, so here goes.

Perhaps in an individual’s case, asking why a child is deprived of oxygen is futile. But it’s not futile in the case of science, or in the case of the hospital. Doctors should absolutely ask why the child is deprived of oxygen, to stop it from happening again. Can we make an advancement in medicine as a result of this? Is there an improvement in hospital procedure that would stop it happening again? Does someone need to be fired for negligence?

It’s the same in education. I am not, as Mr. Roderick to suggest, wallowing in misery about my past. I am happier than I have been at any point in my life before now. I am studying education because I enjoy it. I have seen a systematic failure of the educational process, and I want to see it fixed, for the good of future children.

Besides which, I didn’t ask for an explanation of what “happened to me.” I asked for an explanation of why ACE have been teaching misinformation and blatant falsehoods for decades, when the arguments they presented have never been valid, and when the foundation for these falsehoods is a corruption of the scientific method. The response? “ACE has no problem with the scientific method.” No argument. Just an asserted denial, and the matter is dropped.

As for my mother, well, since you ask, she is a hero. She has shown phenomenal strength of character and admitted that she was wrong. She has taken responsibility for the decision to send me to that school, and posted a comment on this very blog, saying:

“As a recovering fundamentalist myself, I never cease to be horrified at the information given in this blog, even though Jonny and I have discussed these matters often and in depth. I want it on record that I bitterly regret sending Jonny to an ACE school (the reasons for which are complex) and reject its teaching entirely. Jonny has done a magnificent job processing the experience and if this blog helps to expose the system and prevent what he suffered happening to other children, then it is a job well done.”

That’s a shining example compared with the intellectual cowardice of the providers of Accelerated Christian Education, who have never once provided meaningful responses to valid criticisms of their curriculum. I suspect this is because they have none. When you’ve sacrificed for several decades to make something happen, you’re probably not going to be in a rush to admit that what you achieved might have been harmful.

I have the McDowell book he mentions out of the library at the moment, as it happens. It would be better titled Evidence That Demands a Refund.

June 13, 2012 Why I Am An Atheist
Recent Comments
0 | Leave a Comment
Browse Our Archives
get the latest from
Nonreligious
Sign up for our newsletter
POPULAR AT PATHEOS Nonreligious
1