The Key to Understanding Fundamentalist Psychology

Enter Robert Cialdini, Regents’ Professor Emeritus of Psychology and Marketing at Arizona State University. His classic book, Influence: The Psychology of Persuasion, is fascinating to me. It discusses what Cialdini calls “weapons of influence”: psychological factors which influence our behaviour, and which are open to exploitation. I think all of these help to explain fundamentalist behaviour, but one stands out to me: Commitment and consistency. There are enormous internal and external pressures for us to think in ways which our consistent with our past words and actions. Once you’ve made a declaration of fundamentalist faith, and done a few things that fundies do (attending church, evangelism, giving money to religious causes), that’s a strong driver to keep doing the same thing. After twenty years, it’s almost immovable. 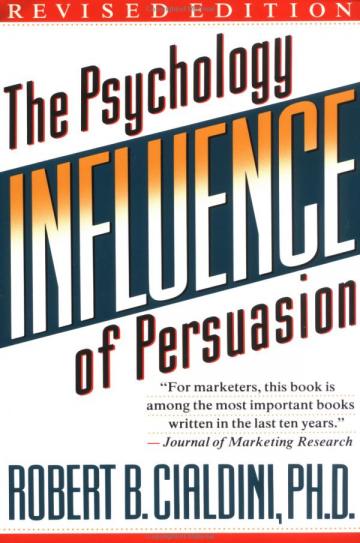 Fundamentalist schools are frequently charged with indoctrination, and I want to look at this charge in connection with the psychological evidence of commitment and consistency. Cialdini describes psychologists Jonathan Freedman and Scott Frasers data. A researcher had made a “preposterous request” of California homeowners: They were asked to erect a huge, badly written sign saying “Drive Carefully.” This sign obscured most of the front of their house. A full 76% agreed. What was going on?

It turns out that two weeks earlier, another researcher had asked these homeowners to make a small commitment to driver safety. They had been asked to display a three-inch square sign that said Be a Safe Driver. Of course, with such a tiny request, most of them had said yes. But now, the researchers explain:

“What may occur is a change in the person’s feelings about getting involved or taking action. Once he has agreed to a request, his attitude may change, he may become, in his own eyes, the kind of person who does this sort of thing, who agrees to requests made by strangers, who takes action on things he believes in, who cooperates with good causes.”

Cialdini discusses in some detail how the Chinese were able to change the beliefs of American POWs in the Korean war.

“Our best evidence of what people truly feel and believe comes less from their words than from their deeds. Observers trying to decide what a man is like look closely at his actions. What the Chinese have discovered is that the man himself uses this same evidence to decide what he is like. His behavior tells him about himself; it is aprimary source of information about his beliefs and values and attitudes. Understanding fully this important principle of self-perception, the Chinese set about arranging the prison-camp experience so that their captives would consistently act in desired way. Before long, the Chinese knew, these actions would begin to take their toll, causing the men to change their views of themselves to align with what they had done.

“Writing was one sort of confirming action that the Chinese urged incessantly upon the men. It was never enough for the prisoners to listen quietly or even to agree verbally with the Chinese line; they were always pushed to write it down as well. So intent were the Chinese on securing a written statement that if a prisoner was not willing to write a desired response freely, he was prevailed upon to copy it. The American psychologist Edgar Schein describes a standard indoctrination session tactic of the Chinese in these terms: ‘A further technique was to have the man write out the question and then the [pro-Communist] answer. If he refused to write it voluntarily, he was asked to copy it from the notebooks, which must seemed like a harmless enough concession.'”

But it wasn’t harmless. By the end of the war, Dr. Henry Segal, chief of the neuropyschiatric evaluation team examining the POWs, reported that their war-related beliefs had substantially shifted. Some praised the Communists for “the fine job they have done in China.”

Now, compare this with a fundamentalist school such as mine, where, in accordance with Accelerated Christian Education policy, we were required to recite two pledges every day:

The Pledge of Allegiance to the Kingdom of Jesus Christ

“I pledge allegiance to the Kingdom of Jesus Christ, Lord and Saviour, crucified, risen, and coming again as King, with life and liberty for all who believe.”

The Pledge of Allegiance to the Bible

“I pledge allegiance to the Bible, God’s Holy Word. I will make it a lamp unto my feet and a light unto my path. I will hide its words in my heart, that I might not sin against God.”

In addition, ACE tests require you to write down their theological positions as the correct answers, or fail the test. If there’s a test about Creation, you have to write that God made man on the sixth day, or lose the mark. And the evidence from psychology is that, even if you didn’t believe that, the act of writing it down could change your perception in favour of that belief. Writing that, and other supporting ideas, every day, for years, is going to have a considerable belief-shaping effect. That, of course, is exactly what the curriculum designers had in mind.

There’s another problem, as Cialdini explains:

“Think of the double-barreled effects on the self-image of a prisoner who wrote a pro-Chinese or anti-American statement. Not only was it a lasting personal reminder of his action, it was also likely to persuade those around him that the statement reflected his actual beliefs. And, as we will see in Chapter 4, what those around us think is true of us is enormously important in determining what we ourselves think is true. For example, one study found that after hearing that they were considered charitable people, New Haven, Connecticut housewives gave much more money to a canvasser from the Multiple Sclerosis Association. Apparently, the mere knowledge that somone viewed them as charitable caused these women to make their actions consistent with another’s perception of them.

What, then, do you think the effect of saying the pledge of allegiance to Jesus and the Bible might be on a child? Remember, everyone has to say those pledges in an ACE school. From the child’s point of view, this is what everybody believes, and there is no alternative.

“ACE stands in direct line of succession to those who sought, by emotional manipulation, to obtain decisions for Christ which by-pass the individual’s rational autonomy, but it cashes in also on the improved manipulative techniques discovered by modern behavioural psychology.”

This is a huge topic I plan to approach over several posts. Already, I think we can begin to see how students in ACE are manipulated and conditioned into belief, rather than arriving at it of their own volition. This is why I think Christians should oppose it. I don’t think Jesus would want followers who are programmed into faith. This is an unethical way to gain religious conversion. For ACE, the end justifies the means. For people of moral values, however, it is an unacceptable level of control.

July 27, 2012
A Collection of ACE School of Tomorrow Survivor Stories
Next Post