It’s been a good first year for this blog, capped off by a successful past week. My post Five jobs a Creationist can’t do was the 23rd most viewed post on WordPress.com on Monday.

This contributed to the blog hitting #6 on WordPress’s chart of fastest growing blogs: 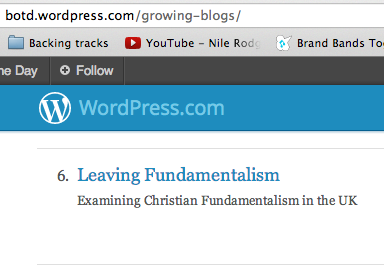 I will be celebrating my success by retiring from blogging about ACE. Before I shut up on the subject, please read my last post.

There’s tons more I could say, but there’s no point. If you’ve read this far and don’t agree with me now, you never will. Those of you who do agree have got the point.

Those in government, on the other hand, clearly don’t regard me as a credible source. I’ve just given up on a frustrating run of correspondence with David Willetts MP, Minister for Universities and Science, about NARIC’s approval of the ICCE. Willetts’ last letter said

“We are also satisfied that there is no evidence from these [Ofsted] inspections to suggest that the materials he [that’s me] cites are in use in either the Redemption Academy or Bridgend Christian school [example ACE schools I had mentioned].”

The minister is wrong. The materials I cited are all part of the compulsory curriculum for the ICCE, and this is laid out explicitly in a document anyone can download from Christian Education Europe’s website, here. Since the schools inspections report that the students take the ICCE, the reports give exactly the evidence the minister claims is absent.

I realise that any idiot can set up a blog, but I have gone to great lengths to provide evidence to support all my claims. I don’t expect you to believe me, but I do expect you to believe the evidence. And if you’re not satisfied by the standard of evidence I provide, tell me what will satisfy you. I managed to satisfy the Guardian‘s lawyers. Twice. And, let me tell you, they were highly reluctant to believe me.

Fortunately, I’m in the middle of a PhD at the Institute of Education, London. We’ll have this conversation again when I’ve got some peer-reviewed journal articles under my belt.

Before I retire, let me tell you one thing that might shock even you guys, who thought you had heard everything.

The ICCE Global board has removed W.A. Criswell’s Creationist classic Did Man Just Happen? from the compulsory literature course for their students. This is a shame; Did Man Just Happen? is a truly terrible book and I was planning to demolish it on the blog at some point.

ICCE have replaced it with After the Flood by Bill Cooper B.A. (hons), as he likes to be known.

Or, to give it its full title, After the Flood: The early post-flood history of Europe traced back to Noah.

Before we continue, you must understand that ACE’s literature course is not a study of fiction. Most of the books, like this one, claim to be factual and are studied as such.

The entire book is available to read online free here (html) and here (pdf). And, since people seem to be in the habit of not believing me recently, here is the complete syllabus for the International Certificate of Christian Education, where you can see on pages 6 and 12 that the book is a compulsory study item for students.

Now, a lot of Creationist literature is lacking in credibility, but After the Flood is – and I normally refrain from using such language – batshit fucking insane.

It uses as source material Geoffrey of Monmouth’s Historia Regum Brittaniae, a pseudo-historical work which includes stories about King Arthur, Excalibur, and Merlin.

The progression is only logical, for if the earth is as young as our forebears thought and as the creation model of origins predicts, then evidence will be found which tells us that, in the recent past, dinosaurs and man have co-existed. There is, in fact, good evidence to suggest that they still co-exist, and this is directly contrary to the evolutionary model which teaches that dinosaurs lived millions of years before man came along, and that no man therefore can ever have seen a living dinosaur. And to test that assertion, we will now examine the issue by considering the written evidence that has survived from the records of various ancient peoples that describe, sometimes in the most graphic detail, human encounters with living giant reptiles that we would call dinosaurs. And as we shall see, some of those records are not so ancient.

And on page 76, he claims that DINOSAURS LIVED IN WALES AS RECENTLY AS THE BEGINNING OF THE 20th CENTURY.

He claims that dinosaurs lived in Wales in the 20th Century.

You can read a demolition of some of its claims here, but even a moron in a hurry can tell that this is not the work of a credible historian.

And that is why I am quitting.

It’s 2013, and UK Naric stands by its public declaration that the International Certificate of Christian Education (ICCE), which teaches the above, is comparable to A-level standard.

We should not even be having this conversation.

But since I am seen as a lone fanatic, I’m going to talk about something else.

There are huge areas of it that I haven’t touched, because ACE has been all-consuming. Now it’s time to talk about those.

If anyone wants me to write, talk, or speak about ACE on another blog, for a newspaper or magazine, or at a conference or event, of course I will do it.

If anyone wants to write a guest post about ACE for me, I would love to have it on the blog.

But, for now, I won’t be saying any more about ACE, because you have heard what I have to say.

I would be very grateful if you’d share this post with your friends. I’m going quiet (for now), but I’m not giving up, and I could use some help. No, the children who are currently being taught this instead of receiving an education could use your help.

Before you go, please vote in my poll. I’m interested to know if, after a year of trying, I’ve persuaded you. Thanks everyone.

April 22, 2013 Why fundamentalists don't believe in atheists
Recent Comments
0 | Leave a Comment
Browse Our Archives
get the latest from
Nonreligious
Sign up for our newsletter
POPULAR AT PATHEOS Nonreligious
1