There’s a simple reason why Christian rock music is never going to be convincing: rock n’ roll is about rebellion, and evangelical Christianity is about obedience. 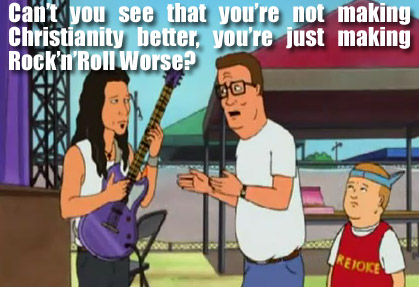 There was a lot of fairly decent Christian rock that sounded like Journey and Bon Jovi. That makes sense because those bands are already inoffensive. It says a lot about evangelicals that there is even a market for Christianised versions of a band whose biggest hit is called “Don’t Stop Believing”.

Evangelical rock is for kids whose parents won’t let them listen normal music. It exists purely as a mechanism of control. The bands probably wouldn’t put it that way, but even the ones who claim to preach the Gospel to ‘the Lost’ actually play to Christian audiences. As a child in the early 90s, I was curious about Guns n’ Roses, Michael Jackson, and Def Leppard. Listening to them was out of the question, so instead I had Bride, Carman, and Petra. They weren’t as good, but because I almost never heard the real thing, I didn’t know that. If I listened to secular rock music, evil spirits in the music would lead me away from God and into a life of sin.

Eventually, that’s what happened, so maybe those fundy preachers knew their stuff after all.

Even though the height of my Christian rock obsession was 1993-1998, almost everything I heard sounded like the 80s. The marketing departments of Christian labels made no bones about providing a Christianised equivalent of secular music. This meant they waited for a style to get popular, and then went and signed a Christian version. Christian rock always lagged a few years behind the secular market, and there was a further delay as I waited for the good stuff to arrive in Britain, in that pre-internet age. In the secular market in 1994, a band that looked and sounded like Extreme couldn’t get arrested, but that was a banner year for Christian AOR.

So Christian rock is powerfully lame. Christian bands had to find a way to seem subversive (so they appealed to the youth) while actually maintaining the status quo. The main way they did this was by pointing out that evangelicals are actually a minority. If you sin and do drugs and have sex and listen to NWA, they told us, you’re just going with the flow. The true cool kids follow Jesus. That’s real rebellion.

Here are some Christian rock classics which try to paint Christianity as the counterculture.

Does it make me a stranger

That my best friend was born in a manger?

If you’ve ever heard a song on this list, it will be this. I thought DC Talk’s exposure on MTV, and resultant platinum sales, would be the trigger for international revival as sinners everywhere realised for the first time that faith in God need not involve singing hymns.

If Steve Taylor weren’t a god botherer, rock critics would now be talking about his lyrics in the same breath as Elvis Costello’s. On the face of it, this is a scathing attack on religion:

The language it was new to me

But Christianese got through to me

Now I can speak it fluently

I want to be a clone

But actually Taylor is only criticising denominational Christianity – what evangelicals call “dead churches”. Taylor contrasts this with his own real, living relationship with God. It’s clear from the other lyrics on his debut EP that he is otherwise keen to prop up the establishment, as in “Whatever Happened to Sin“, which satirises liberal views on abortion and homosexuality:

Say it ain’t none of my business, huh?

A woman’s got a right to choose

Next you pull the trigger

Whatever happened to sin?

[Side note: I once recited the above lyrics from “I Want to be a Clone” to my ACE supervisor when she came to dinner. There was a long silence at the table, and then conversation resumed as though I hadn’t said anything.]

Never ones for subtlety, D&K opted to spell it out.

Throw away the garbage you’re eating

Throw away the lies you’re believing

Throw yourself into the saviour

Be a rebel for God

One Bad Pig were a Christian punk band. Given the inherent opposition between the punk aesthetic and fundamentalism, this was never going to end well. This is a perfect example of a band who appear to be singing to the unsaved masses, but whose audience are in fact almost entirely Christian. My admiration for One Bad Pig (as a fundamentalist child who’d never even seen anyone drunk) came from how perfectly I thought their lyrics spoke to the needs of punks. I can’t find “Godarchy” on YouTube, but it’s on myspace and spotify.

Tell me what you believe

Get down on your knees

Their tracks “Hey Punk” and “Thrash Against Sin” were similarly incisive. And their classic “Smash the Guitar” somehow managed to link bands trashing their gear with Jesus cleansing the temple.

As you can see, readers, it is we who are the squares.

From elsewhere on the web:

May 7, 2013 ACE in New Humanist magazine: A fundamental problem
Recent Comments
0 | Leave a Comment
"Where do you live? I've never had an issue with my diploma and I've worked ..."
Joshua Alexander Putting life back together after Accelerated ..."
"Bye Johnny. It is poetic justice that your lies, stupidity, hated has finally caught up ..."
Matman It’s time to move on from ..."
"Just to ease your mind, I want you to know that I am free of ..."
Cyndi Draper Guest post: Be careful, or your ..."
"Yes. The resurrection of Christ is the best attested event in human history. 1) the ..."
Romica Ciocan The resurrection: Best-attested fact in history?
Browse Our Archives
Follow Us!