Why fundamentalists will never listen to me

Why fundamentalists will never listen to me July 10, 2013 Jonny Scaramanga

From Marianne Talbot, I have learned a useful expression: a self-sealing argument. This is an argument which cannot be refuted, because it doesn’t allow any counter-argument. Almost every fundamentalist argument is self-sealing. This is why, in the end, I concluded that fundamentalism couldn’t possibly be true. Some will accuse me of scientism for this, but I concluded that unless a belief is testable, there’s no point holding it. All will become clearer if I show you an example.

The worst insult a fundamentalist can ever throw at you is ‘unbeliever’. On the face of it, this is a very strange accusation to make.

Liberal Christian: “I don’t believe the virgin birth was a literal event.”

LC: “Er… yes, I don’t believe that, so you could well describe me as an ‘unbeliever’ if you like.”

Witness the way “unbeliever” is thrown around as an ad hominem to discredit anyone with whom the fundamentalist disagrees. From Accelerated Christian Education I learned that higher criticism was not to be trusted, because “the leaders of higher criticism were mostly arrogant, unbelieving Germans.” Higher criticism is described as “the evil that was planned by Satan” drawing many “into the whirlpool of unbelief!”

In fact, anyone who dared to question any aspect of the Bible was declared an unbeliever, full of unbelieving doctrines. Just look at the ire liberals receive for not believing the right things (this and all quotes so far come from ACE’s Basic New Testament Church History 132, (c) 1976, which is still, incredibly, the current edition): 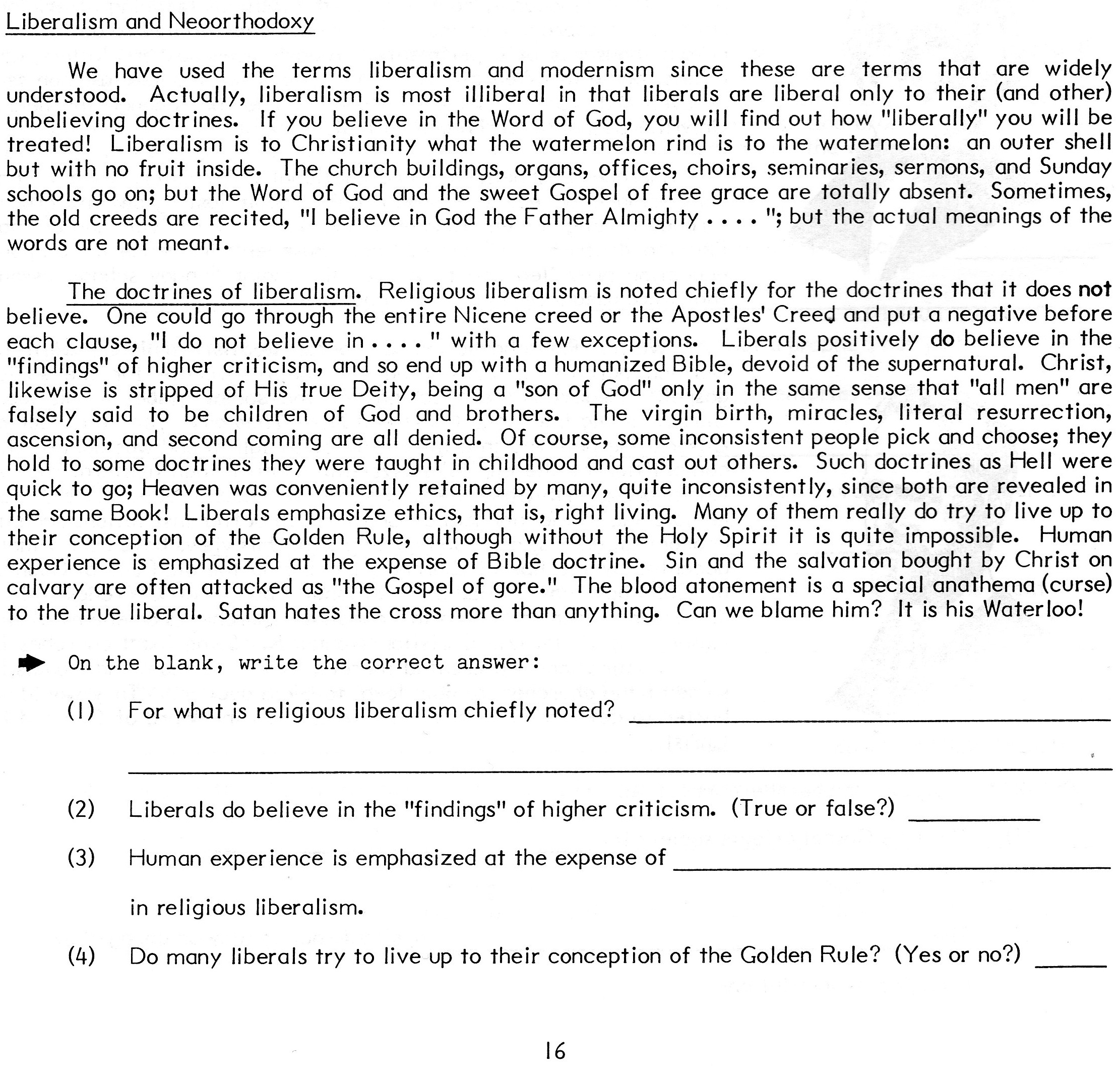 Fundamentalism was apparently started by “believers who were concerned over the inroads of unbelief in Protestantism”. Liberals are “liberal only to their (and other) unbelieving doctrines.” Of the ecumenical movement, they say “One thing is certain: evangelical, born-again Christians cannot merge with those who have denied the faith!”

What’s all this about? The first PACE  (#109) of ACE’s Basic Old Testament Survey series sheds a little more light:

To think clearly, a person’s mind must be clear and tuned to receive the messages God would send. An unsaved person will have a difficult time understanding what God is saying because “… the natural man receiveth not the things of the Spirit of God: for they are foolishness unto him: neither can he know them, because they are spiritually discerned.” (I Corinthians 2:14)

The “natural man” is an unsaved person. Salvation is a definite prerequisite to understanding the Bible. If you are not sure that you are saved, you should bow your head and ask the Lord Jesus to come into your heart and life, forgive your sins, and save you.

Let’s ignore for the moment the question of whether it’s appropriate to have appeals to religious conversion in a curriculum. Salvation, we learn, is a prerequisite for understanding the Bible. All that preposterous crap in the Old Testament that no one could possibly take literally? It turns out we just don’t understand it.

You see, readers, the reason what ACE teaches seems likely baloney is because we don’t believe it. If we believe, then it will make sense!

This is why the most lethal weapon in ACE’s arsenal is to term someone an unbeliever: An unbeliever is, by definition, someone who cannot understand the truth.

Of course, a fundamentalist is a believer, and believers have, well, beliefs. If you disagree with their belief, that makes you… an unbeliever. And unbelievers, as we’ve learned, receive not the things of the spirit of God. Of course you disagree: you don’t believe!

So ACE, as their vice-president Ronald Johnson made clear in a 1987 article, are more than happy to listen to criticism, as long as it’s from conservative, pro-Bible sources. Here’s what he actually said:

ACE does not subscribe to academic works simply because they are considered to be scholarly or critical. Sources for a distinctively Christian community must at least be pro-family, pro-life, pro-marriage, and pro-church in order to be considered “solid” references.

In other words, we’re entirely happy to accept criticism, but it can only come from people who agree with us. And when they apply this criterion, fundamentalists magically find that everybody agrees with them!

As a mechanism to stop people leaving fundamentalism, this is extremely powerful. Remember, salvation is by faith, so if you find yourself straying into unbelief, you’re going to sit on your doubts hard, lest ye lose your salvation entirely.

Now, here’s the thing about self-sealing arguments: You can’t disprove ’em.  They could, in theory, be true. But because there’s no evidence that could ever disprove them, they could equally be false, and the believer would have no way of knowing.

This requires you to believe that God has designed the path to truth in such a way that it looks identical to the path to destruction, and there’s no way of checking which path you’re on. There are other religions with equally self-sealing paths, and adherents who are equally certain they are right. Travellers on all paths claim to have direct experiences of God, so religious experiences don’t offer any clarification.

That’s why I think that if you’re going to base any important decisions on a belief, you have to ask the question “How would I know if I’m wrong?” If the answer is “There’s no way to tell”, you’re on shaky ground.

July 11, 2013 A case for banning creationism in schools
Recent Comments
0 | Leave a Comment
"While it sounds like he has switched to the church of the Daily Show, he ..."
D'artagnan An atheist wrote the theme tune ..."
"I wish I knew about this blog years ago. I'm glad it's still here. Thank ..."
Ralph Facter It’s time to move on from ..."
"Gibbs III is also responsible for the ludicrous 'Terri Schiavo has changed her mind!' argument. ..."
Astrin Ymris The Fixer: Christian lawyer’s history defending ..."
"ACE does not control any of these schools. ACE only provides the curriculum and program. ..."
mccartherable . Top 3 ACE School of Tomorrow ..."
Browse Our Archives
get the latest from
Nonreligious
Sign up for our newsletter
POPULAR AT PATHEOS Nonreligious
1