The resurrection: Best-attested fact in history?

As a child, I was taught that the resurrection of Jesus Christ was the best-attested fact in all of ancient history. This is an extremely popular fundamentalist claim, probably originating with Thomas Arnold. It’s a bizarre one to make, as well, because fundamentalists also insist we must believe in Jesus by faith. Which is it? If the resurrection of Jesus is a superlatively well-documented fact, surely I don’t need faith. Fundamentalists are pulling the same trick they try with ‘scientific’ Creationism: They’re claiming that the evidence is conclusive, and where it isn’t, then insisting that faith is necessary to plug the gaps.

In claiming the resurrection of Jesus is historically verifiable, a huge amount is at stake. If Jesus physically rose from the dead, I should almost certainly be a Christian. That would change how I live my life. And that’s exactly what happened. Partly on the basis of what I was taught as incontrovertible evidence, I lived my life as a fundamentalist Christian. This is a far more critical matter than the age of the universe. It has implications for what I do with my money, who my friends are, what education I receive, what I do with my spare time, and what career I choose.

I was making all of those decisions on the basis that Jesus’ resurrection was… Well, let me quote:

The Resurrection of Jesus Christ from that ancient Judean tomb is one of the best proven facts in history — the best authenticated fact in all of ancient history. We have more documentary and practical evidence that he rose than that many important events even took place in the ancient world.[citation needed]

This is not true. It’s not remotely true. It’s a whopper to level with any of the untruths I’ve previously mentioned from ACE. Look at the strength of what they’re claiming here: Not just that Jesus rose from the dead, nor that this is proven beyond reasonable doubt (which, if you think about it, is a separate question), but that this is the single best authenticated fact in all of ancient history.

And it just isn’t. That doesn’t mean you shouldn’t believe it happened – that’s another conversation for another day. Perhaps Jesus did rise from the dead, but this is certainly not an indubitable fact.

What would constitute good evidence, and do we have it for the resurrection? Obviously photos and video would be nice, but God decided to make the resurrection happen before that was possible.

We don’t have any. The only account we have from someone who claimed to see the resurrected Jesus was Paul’s, and he didn’t claim to see a flesh-and-blood physical body. ACE taught me that Matthew and John’s Gospels were eyewitness accounts (and Mark’s and Luke’s gleaned from eyewitnesses). They were fibbing about this too. The Gospels were anonymous and the names we now give them were attached much later.

We don’t have any of these either. Obviously, accounts from the time the event supposedly happened are more likely to be reliable than ones from years later. Jesus’ death was in approximately 30 CE; Mark’s Gospel (the earliest) was written around 70 CE.

All the resurrection accounts we have are from Christians. They have an obvious motivation to promote the resurrection story. An account from a non-Christian would be good. Even a contemporary account from a non-believer simply saying “Well, lots of people are claiming they’ve seen this dead bloke walking around” would be good. If Jesus had risen from the dead at this time, we’d expect to find lots of accounts of this type. We don’t have them.

Jewish historian Josephus is often claimed as being such a neutral source, but Josephus’ Antiquities of the Jews (from around 93-94, so still not a contemporary account) shows evidence of Christian tampering. The scholarly consensus is that the claim about the resurrection was added later, by Christians.

There are other sources sometimes claimed as evidence for Jesus (The Talmud, Pliny the Younger, Tacitus, Suetonius, Thallus, Phlegon, Mara Bar-Serapion, Lucian, Hadrian), but they don’t mention the resurrection, or even Christian belief in such an event.

So we’re left with the Gospels. Yale University’s Dale Martin argues that the Gospels are not reliable evidence of anything (click the link to watch his full argument):

I believe that none of the empty tomb stories in the Gospels has any claim to historicity at all.

The only two things all five accounts (the four Gospels and Paul) have in common is, number one, that Jesus did in fact rise from the dead, and number two that it was on the third day. Everything else – who saw him, where they saw him, when they saw him, what else they saw (was it a young man, an angel, two men with dazzling clothes, two men sitting in the tomb, one at the head, one at the foot…), what Jesus looked like, differs in all the accounts…

These are the kinds of inconsistencies that a historian would expect when encountering stories that grew up and changed over time and space. You get the basic idea that Jesus was raised from the dead right. You even get this very old tradition that it was on the third day, but every other detail differs. If you put five people who all claim they saw a murder, and put them in five different rooms, and the only thing all five can agree on is that they saw it, but they can’t agree on who did it, how many accomplices were there, how many people were there, was it in Houston or Washington… If you had all these differences among five witnesses, you wouldn’t be able to accept the witness of any of them.

You can watch his explanation of the differences on YouTube. Or you can look at this handy guide (I’ve seen clearer guides than this, and also an amusing comic strip, but can’t find any of them, so let me know if you have others): 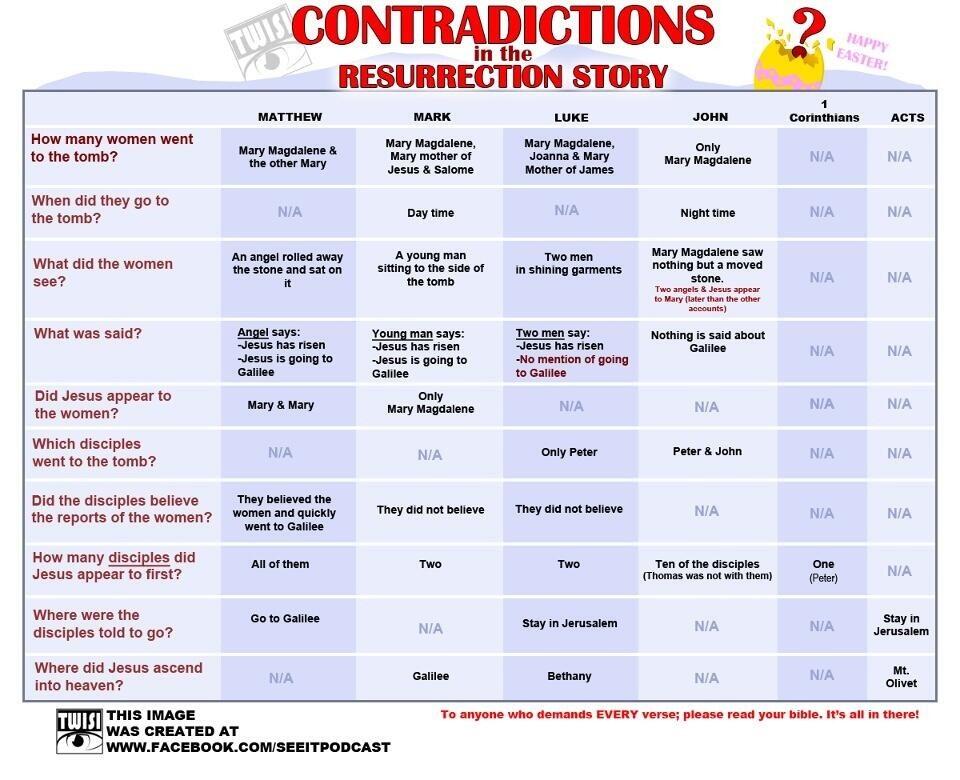 So maybe Jesus did rise from the dead, but the evidence is not the best in the ancient world. It does not put the matter beyond reasonable doubt, let alone prove it conclusively. And I know fundamentalists reading this will dispute all of the above, but that doesn’t matter.

You can only teach as fact those things which are decisively settled by the evidence.

It is immoral to teach in school that the resurrection of Jesus is a proven fact when it is nothing of the kind. It makes no difference that ACE are sincere in their belief. Children have the right to make an informed decision. This involves knowing what the evidence is. It involves learning what different interpretations exist for that evidence, and the reasons for those interpretations. Good education would teach them how to weigh those arguments, and to recognise good arguments. Fundamentalist education doesn’t do this (if it did, children would realise the arguments are packed with fallacies).

This is indoctrination. It is a violation of a child’s right to think rationally. It is dishonest and immoral. And it comes from Christians who claim that they have a monopoly on moral behaviour.

August 14, 2013 Denied the right to an education
Recent Comments
0 | Leave a Comment
Browse Our Archives
Follow Us!

Crokin: Tom Hanks to Be Arrested...
Dispatches From the Culture Wars
Related posts from Leaving Fundamentalism