Notice: I am giving my talk, “Inside Britain’s Creationist Schools”, in Leicester tomorrow. Details here.

There are a lot of people who dislike creationism. Richard Dawkins, famously, is not that keen.

James F. McGrath, author of such treatises as “Do young earth creationists worship the devil?” and “Antievolutionism is a tool of Satan“, also appears to hold a less than favourable view.

Eugenie Scott has dedicated her life to fighting it, and Paul Braterman, sometime guest poster for this very blog, called it a cancer.

But all of these people’s antipathy to creationism pales into nothingness when faced with the raging, explosive hatred of Ian Plimer. Plimer feels about creationism roughly as normal people feel about child slavery. On the first page of his book, he calls creationism a “cult” and accuses creation scientists of committing “blatant scientific fraud”, and the salvo barely lets up from there. Telling Lies for God: Reason vs Creationism is not a nuanced or subtle tome. And, as much as I wanted to like it, I’m not convinced it’s very good. 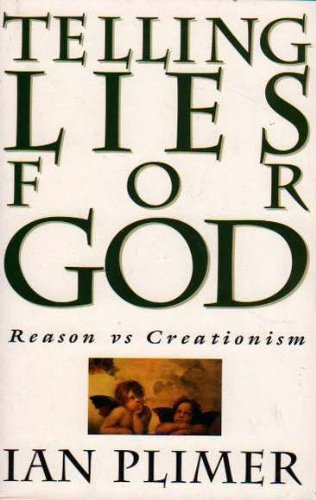 I’m annoyed, because it’s potentially both a good and useful book. Plimer, a professor of geology, certainly has the knowledge to critique creationism. But here, he doesn’t do it clearly enough to be useful to a lay reader like me. So is this book aimed at scientists? That seems unlikely; I doubt many trained scientists need help understanding why mainstream science rejects creationism.

I’ll illustrate the problem with a quotation:

Creationists use the electronic media to circulate their message that the speed of light is not constant, and fly in aeroplanes which demonstrate that modern integrated science just actually happens to work.

OK, so Plimer appears to be making two arguments here:

WHY? Clearly, this is palpably obvious to Plimer, but it’s not obvious to creationists, and it’s not absolutely transparent to me as someone who was taught science by creationists. Now, admittedly, this is only the introduction. But things do not get much better as the book progresses. There are lots of reasons given why creationism is false, but there are no citations. Perhaps the publishers felt that they would be off-putting in a popular book, and make it too long and expensive. But the result is that no evidence is given for many of Plimer’s claims. Without this evidence, the book becomes one long argument from authority, which is exactly the kind of fallacy creationists are accused of committing.

He keeps doing it:

Dating of rocks by radioactive decay and fossils is fundamental to oil exploration. Every petroleum exploration program expends large amounts of risk capital dating rocks… Although such dating techniques seem to work because new oil fields are continually being found, it is clear that if creation ‘science’ is correct, then such discoveries are accidental.

This is a really interesting and potentially useful argument against creationism. But as a nonscientist, I would like some more information on how this is done, or at least a footnote telling me where I could find out. There is none.

On the subject of whether the speed of light is constant, Plimer makes various assertions about how it would be “abundantly evident” if this fundamental constant had been changing. But he doesn’t say what changes we might expect.

In order to have an Earth thousands of years old, creationists have had to tamper with one of the cornerstones of the Universe, the speed of light. Creationist writers claim that the speed of light at the time of creation was some 200 billion times faster than now [citation needed].

If the speed of light at the time of creation and before the first sin was some 200 billion times faster than now, then any process involving energy would be far more energetic.

So, if Adam lovingly lit a fire for Eve, then the energy released would be equivalent to a 50-megaton atomic blast. Adam and Eve produced two children and the energy released during each of the two necessary acts of procreation would be equivalent to an explosion of 500 tons of TNT. This is clearly the origin of the expression ‘Did the earth move for you also, darling?’, or perhaps it could be interpreted as the creationist big bang theory.

In the time of Adam and Eve, before light had started to slow down, if there was ultra-high-speed-light, its frequency would have to be as high-energy gamma radiation for Adam and Eve to see each other.

By all Genesis accounts, Adam and Eve could see in the Garden of Eden. The problem with such high-energy radiation is that it causes radiation sickness within minutes and death within hours.

Just a mention of the relevant science that allowed Plimer to calculate this would be welcome. The arguments on this page alone (and there are many more like them) are fascinating, but they presume a level of scientific understanding that I don’t think is reasonable. My understanding of science is average. I have double science GCSE, in which I got an A grade. I am neither good nor bad at science, but I am interested. Who is this book for, if it isn’t for me?

How not to argue with creationists

In an excellent essay of the above name, anti-creationist Jim Lippard takes Plimer to task for unethical debating practices against creationists. In a debate with Duane Gish, for instance:

Plimer’s opening volley was that “‘Creation science’ is a contradiction in terms. I’ve accused the leaders of fraud, perversity, heresy, fabricating their evidence, and lying about the scientific evidence.” He gave as his first example Michael Denton’s book, Evolution: A Theory in Crisis, which Gish had already mentioned in his own opening statement. “What we were not told,” said Plimer, “was that Michael Denton, at this university last year, said and admitted he was wrong. That was published. He also said that he was unaware of the fossil record when he wrote it.”

Plimer explicitly states that Denton was unaware of the fossil record and implies that Denton has retracted his entire book. Neither is the case.

Plimer, rather than treating the event as an academic debate, used the occasion to abuse and ridicule Gish–at one point even offering Gish a chance to electrocute himself on bare wires to demonstrate that electricity is “mere theory.” The mostly creationist audience was not amused.

This is a great shame, because it undermines my confidence in what appears to be the best part of Telling Lies for God. Plimer claims that on multiple occasions, he caught creationists in the act of lying in public. He gives numerous instances which seem to confirm his argument that creationists are deliberate fraudsters. But Lippard points out that Plimer has made unsupportable allegations against creationists on several occasions, and in Australia ABC television actually apologised for one such claim of Plimer’s.

One of Plimer’s best stories is about how, in a debate with Duane Gish, he critiqued the arguments in Gish’s pamphlet, Have You Been Brainwashed? Gish responded that this booklet had been withdrawn from sale. In response, Plimer went into the foyer during the interval, bought a copy of that very pamphlet for 30 cents, and showed it to the audience. He has many such stories, but Lippard’s essay casts doubt on Plimer’s credibility. Presumably the publishers checked out such potentially libellous claims, but it’s hard to be sure.

And that was before it emerged that Plimer is a climate change denier.

The chapter on Noah’s Ark is pretty good, but to be honest, Nonstampcollector’s YouTube video is better and shorter. So while this could have been a useful book for recovering creationists, it lands wide of the mark. And, most importantly, Plimer completely fails to recognise that you don’t change anyone’s mind by beating them with a stick.

October 15, 2013 I Didn't Want to Be Broken, I Wanted to Be Whole: By Neriah
Recent Comments
0 | Leave a Comment
Browse Our Archives
get the latest from
Nonreligious
Sign up for our newsletter
POPULAR AT PATHEOS Nonreligious
1