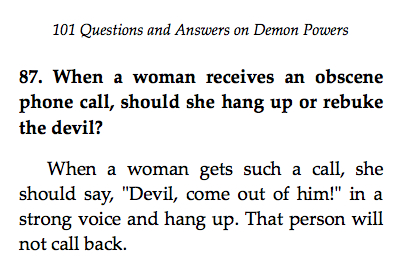 I bet they fucking won’t.

This quotation is from Lester Sumrall‘s – sorry, Dr. Lester Sumrall’s – 101 Questions & Answers on Demon Powers. Which happens to have found its way to Earth as a pdf here. It’s as good an introduction as any to what I grew up believing about demons, which was roughly that they’re absolutely everywhere, and they can do almost anything.

I grew up thinking that, unlike God, who required faith of us as a kind of virtue, Satan was happy to drag us to hell by any means available. This meant that while God wouldn’t just perform miracles at the drop of a hat (because then we wouldn’t need faith), Satan was happy to perform party tricks. That was why psychics, witch doctors, and Satanists were so powerful. Every story you’ve ever heard about a spiritualist who could throw people across a room using psychic energy, about curses, about witches, about Satanic Ritual Abuse… I believed every one of them, and I believed Satan was behind it.

This is a scary world in which to live. But it was OK, because as long as I stayed close to Jesus, he would protect me. Staying close to Jesus meant keeping up to date on repenting of my sin. Although when I got saved, Jesus forgave me of all my sins, I still continued to sin. Every time I did, the ‘hedge of protection’ of Jesus’ blood got a hole in it which the devil could get through. So I had to keep a full and continual sin-accounting process going so I wasn’t at risk from child-molesting Satanists (Note: I’m not sure I was actually aware at the time that child-molesting was what Satanists allegedly got up to, but there was a genuine moral panic about just this when I was growing up).

What else can we learn from Sumrall’s tome?

Are you a Hindu? You worship demons.

Hindu gods are spirits. If your relative is attached to a Hindu deity, and most likely he is, that deity is an evil spirit. If he is worshiping that deity and if he has a mantra (a secret word that he receives from a guru and which he keeps repeating inside), that is an open door for the devil. By putting his mind in neutral, which is what the mantra accomplishes, evil spirits can enter in through the unguarded door to his mind.

Are you a Buddhist? You worship demons.

There are demons who rule over large areas as lords, or leaders, and governors in the evil spirit world. For example, according to Buddhist belief, Pa, the ruling god of Singapore, demands that all his followers come first to his temple to burn incense and to worship him before they can go worship in any other of the many temples of the city. This is common knowledge among the Buddhists of that area.

Consequently, the East is a scary and evil place, because it’s so full of demons (especially Tibet):

While demon power is universal and found in all parts of the world, it definitely is stronger in areas where there is little or

no resistance to the devil. Where there is no prayer or Bible reading, demon power reaches terrible proportions and results in strange manifestations.

For example, I have felt more of an evil, oppressive spirit in the country of Tibet than almost anywhere else I have traveled in the world. This is because there is virtually no resistance or opposition to satanic power there. Rather, many people have given themselves over to the devil, and many others actually worship demons. Tibet reminds me of Revelation 2:13: I know … where thou dwellest, even where Satan’s seat is.

Is all this just a cover for racism? Well…

89. I have a collection of Beatle records. Is it all right to sell them and give the money to the Lord’s work, or should I destroy them?

Destroy them! They might send someone to hell. The beat in such music is the beat of the jungle, and it will tear apart a person’s insides.

“Unfortunately my mother, a born again evangelical spiritualist christian/ voodoo witch (I do wish I was making this up) proceeded to cast the devil out of the bank manager while prancing about chanting and sending him to hell fire because he turned her down for a loan. What’s even more unfortunate is that she did get that loan and believed it was to do with her faith and nothing to do with the fact that he was terrified she was putting potential customers off!”

Note: A lot of people are going to object to my use of “fundy” in the title here, since Sumrall has nothing to do with the Independent Fundamental Baptist movement (who think he’s a heretic). But Sumrall, who’s now dead, would happily sign up to the five points of doctrine on any fundamentalist creed, and it’s in this broad sense that I use the term. Also, the teachings I discuss here are all compatible with teachings I’ve heard about demons from more conservative, capital-F Fundamentalists.

October 22, 2013 Demon doorways: Did you leave yours open?
Recent Comments
0 | Leave a Comment
Browse Our Archives
get the latest from
Nonreligious
Sign up for our newsletter
POPULAR AT PATHEOS Nonreligious
1