By now you’ll have seen my Salon article about how charter schools (mostly in Texas) are promoting creationist ideas in a way that seems to violate church-state separation. There are two main curricula discussed: ResponsiveEd and Paradigm Accelerated Curriculum (PAC). Both are offshoots of Accelerated Christian Education (ACE). Of the two, ResponsiveEd seems to be used more widely, but it’s hard to get solid information about it. PAC, on the other hand, has kindly uploaded many curriculum samples to its website. What they’ve uploaded will be of great concern to campaigners for both secularism and science education. PAC lessons mock and insult Islam, promote Christianity, and attack mainstream science.

A brief web search finds Paradigm Accelerated Charter Schools in Dublin, Comanche, Wallis, and Early, all in Texas. Although the Dublin school is shown as having closed or relocated (and its website now links to a page in Japanese), it was functioning at least as recently as January 2013, when GreatSchools.com last updated its page, giving the school 2 out of 10. None of these schools has its own website, so it’s hard to determine their status, but PAC markets itself as a charter school curriculum and claims its curriculum “honors the so-called ‘separation of church and state’ doctrine, thus enabling purchase of Paradigm curriculum with tax funds.” Hmmm.

PAC is run by former ACE Vice President Ronald E. Johnson, who you will remember for writing “Children matriculate into Christian school in dire need of spiritual programing of their minds to accept and desire the things of Christ.” What ‘programing’ is he offering now?

The region where Europe, Asia, and Africa meet is known as the “Fertile Crescent.” Our timeline begins there about 4,000 BC when scientists agree that a cataclysmic event occurred (like a worldwide flood) that forced mankind to “start over.”

The sites of Jarmo (in northern Iraq) and Jericho (in central Israel) are thought to be the two oldest human settlements on Planet Earth.

I am not much of an anthropologist or historian, but since we know humanity came out of Africa, this cannot possibly be true. Fun fact though: By 4,000 BC, when the author claims modern civilisation began, Jericho had actually been occupied for about 5,000 years.

“The Ten Commandments” has been the foundation for law all over the world, from Asia to America, and influenced the men who designed the United States Constitution; the United States’ national motto, “In God We Trust,” tells the world on whom Americans depend…

In another lesson, students are taught about satire and parody (former ACE students will no doubt have opinions on how well-equipped the author of PACEs is to deliver lessons on humour). But just compare the respective ways Judaism and Islam get treated in these examples:

You may talk about your kings of Gideon,

At the battle of Jericho.

Joshua fought the battle of Jericho,

Joshua fought the battle of Jericho,

And the walls came tumblin’ down.

They try to tell me my religion is wrong

They said their prophet was a righteous dude

But I found out none of their words were true

Islam is not for me.

Now, some of you are going to suggest that I am a hypocrite for linking to Jesus & Mo, while criticising PAC for this ‘satire’ of Islam. But I think there are some important differences (beyond J&M being actually funny):

Spiritual health involves your belief system and includes practice of the U.S. National motto, “In God We Trust.” In fact, doctors report that people who pray and attend religious services regularly are more likely to be emotionally stable and experience better physical health than people who neglect religious practices.

Here are some lifestyle factors recommended by doctors and scientists that can lead to a healthy future:

*give up (or never start) using tobacco

*save sex for marriage

*get 8 hours of sleep each night

*learn to respond positively to stress

*channel anger into something productive

*participate in spiritual and social activities

Statistics show that married people live longer than single people. Research indicates that families who pray together and attend church together lead happier and healthier lives, stay out of trouble and actually live longer than those families or individuals who do not.

Who is this research by? Americans United for the Promotion of Irrelevant Correlations?

From 600 A.D. to 1400 A.D., Europe fell into the Dark Ages (also called the Middle Ages). Science did not advance during this era of time. The Bible was forbidden in many countries, thus, learning and knowledge came to a standstill in Europe.

Ah yes, the Dark Ages were troubled by a lack of religious influence. 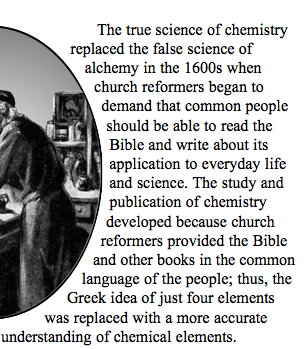 This is very similar to what ACE has to say on the subject. A quick jaunt on Wikipedia will tell you why it’s misleading.

I already covered this in my Salon piece, but there’s so much more. The first of PAC’s samples is jammed with anti-science and pro-Bible propaganda, although the page on their site is so littered with errors it’s hard to work out what the text is trying to say:

PAC books have life principles which replace the Bible verses used in ACE, because, you know, PAC is ‘secular’. The “life principle” in this book is a quote from Galileo:

In questions of science, the authority of a thousand is not worth the humble reasoning of a single individual.

In the anti-science context of PAC’s book, this becomes a dangerously misleading anti-intellectual statement. I would have preferred this, also from Galileo:

I do not feel obliged to believe that the same God who has endowed us with sense, reason, and intellect has intended us to forgo their use.

The “life principle” for the second sample is much worse (ie, it is outright false, or possibly taken far out of its original context):

The single worst thing about PAC, and Ronald E. Johnson’s entire approach to education, is not the anti-intellectual sentiment. It is the total failure to educate, summed up in this question:

5. The theory that every substance contained the “magical” ingredient, _________________, which caused combustibility was known as the phlogiston theory.

THE ANSWER IS IN THE FUCKING QUESTION! This is not a meaningful measure of learning. Only an ignoramus could think this is an educational approach to transmitting information (and only an unthinking spunk monkey would think education is primarily about transmitting information). Over and over again I completed mindless Accelerated Christian Education exercises like this, and now I find Ronald Johnson is still doing it. This means that even when he isn’t teaching material that is bigoted, dangerously misleading, or outright false, he still offers a worthless form of education.

UPDATE: The Wallis PAC school was absorbed by ResponsiveEd, the other ACE-offshoot charter curriculum. This article gives more info, including the concerning claim:

The program is no longer operating as originally established.  However, Royal Independent School District set up its own Royal ISD Recovery Center, patterned after the Paradigm model, and hired the previous principal of the Paradigm Wallis campus to operate the Royal ISD recovery program.  Entrepreneurs from Ohio, Indiana, Oklahoma, and Texas have been trained to replicate the Paradigm model.

And this utterly bizarre fact:

Girls were prohibited from displaying cleavage in front or back.

“Or back?“ Meaning… bum cleavage? And, if that is what they mean, were boys allowed to display cleavage “in back”?

October 28, 2013
Creationist charter schools: not just for Texas, not up to scratch
Next Post