I’ve blogged before (more than once) about how ACE’s policies put children at risk of abuse. By teaching children to obey no matter what, and by not educating children properly about when (or how) to say no, they leave children vulnerable. I’ve discovered evidence that this is a bigger problem than I previously thought. We’ve already heard from Christopher and Anaïs that sexual abuse is a reality for some ACE students. The company should be doing more to equip students against it. Instead, their staff training instructs ACE supervisors to view children as unreliable, and to ask their parents to treat them the same way. 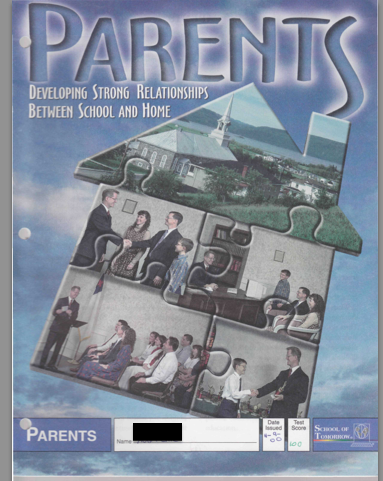 ACE staff are trained from a PACE called Parents: Developing Strong Relationships Between School and Home. Essentially, it’s a guide for staff on how to handle parents. It contains much legal ass-covering:

It is wise to have parents sign and date a conference checklist form. The form becomes a record of the meeting, showing what items were discussed. Having the parents’ signatures is especially advisable whenever major issues or discipline matters are handled during the meeting. Being able to refer back to this information and being able to show that the parents signed the checklist, showing they were informed, may prove to be invaluable should a disagreement arise.

But the thing that concerns me is this:

This possibility should be anticipated. Simply put, “Kids gripe.”
Explain that parents must not take sides with a complaining child. Also, they must not discuss the school negatively in front of the child. To do so undermines the school’s effectiveness and encourages a belligerent attitude in the child. Later in this PACE a further discussion of this topic is presented in the section “Handling Slanted News!”

Again, ACE’s theology that because of original sin children have a degenerate nature with constantly rears its head. Children’s sinful nature needs to be pushed into conformity with God. This requires discipline, and the child’s deceitful heart will not like it. They will complain. But this is not a problem with the discipline. This is to be expected, because their sin nature is kicking against God. The solution is more discipline.
But what if a kid is actually being abused, ACE? How would this be distinguished from ‘griping’?
They continue:

There is much said today about the liberal bias of the news media. The media is criticized frequently for presenting “slanted news.” However, the inaccurate and biased reporting of the media cannot be compared with news carried home from school by some children.

As we all know, the liberal media is the mouthpiece of Satan. And children are worse than that.

Imagine a minor incident happening in the Learning Center. By the time the incident is reported at home, it could be exaggerated beyond belief. By means of slanted news, minor points can become major problems. The way to avoid this frustration is to abide by the following practical points. Explain to the parents how important it is that they adhere to these guidelines.

Keep the lines of communication open so parents can support the school in its decisions.

This all sounds familiar. And troubling. Frankly, encouraging parents to disbelieve their children sounds like bad advice to me even in situations which aren’t otherwise abusive. Knowing your parents trust you is pretty important to a kid.
AND THEN:

When suspected of misrepresenting information, offer the child the opportunity to explain the incident in front of a parent and a school staff member. Ninety percent of staff-pupil problems could probably be solved if this tactic were employed.

Let’s just imagine a hypothetical situation in which an ACE student is being abused by their supervisor. Now, I’m not saying this is a common occurrence, but no one can claim it’s impossible, because it has happened. So ACE are saying that the best way to resolve this is for the child to be called into a conference with their abuser. And then the whole truth is going to come out. Seriously? And, in this situation, if the child backtracks, presumably all the adults are going to say, “There. Doesn’t it feel better to tell the truth?”
And at the end is a cartoon which ACE have chosen as typical of the kind of thing the kids will be taught. Here it is:

Obedience always makes us happy.
Makes me fucking angry. And it should make you angry too.
***
Incidentally, ACE are also expecting some parents to need pugilistic treatment almost as much as their children:

Like their children, parents also possess more or less character. Those with less character might be found talking over the back fence or calling other parents on the phone to criticize the school. The only way to avoid a situation like this is to help parents stay on the ball—help them fulfill their responsibilities.

One administrator shared, “We don’t have a bit of trouble with parents in regard to their financial support. What I do, as soon as the support is not there, is to give them a call on the telephone. I simply do not let them fall behind.”

Here are a couple of photos to show I’m not making this up, as usual:

November 21, 2013 Fundamentalist Flashbacks
Recent Comments
0 | Leave a Comment
"I wish I knew about this blog years ago. I'm glad it's still here. Thank ..."
Ralph Facter It’s time to move on from ..."
"Gibbs III is also responsible for the ludicrous 'Terri Schiavo has changed her mind!' argument. ..."
Astrin Ymris The Fixer: Christian lawyer’s history defending ..."
"ACE does not control any of these schools. ACE only provides the curriculum and program. ..."
mccartherable . Top 3 ACE School of Tomorrow ..."
"Koming here, bekause another blogger on Patheos was diskussing ACE, and now finding your blog ..."
B.E. Miller It’s time to move on from ..."
Browse Our Archives
get the latest from
Nonreligious
Sign up for our newsletter
POPULAR AT PATHEOS Nonreligious
1