So the British Humanist Association has declared war on publicly-funded creationist nurseries in the UK. They’ve identified 67 nurseries of concern, of which nine are using the ACE curriculum. Of course, I first told you this was happening a year ago, so it’s nice to see something happening at last.

In a stupendous feat of good timing, two weeks ago a friend purchased the entire ACE kindergarten curriculum for me, so I can show you where your tax money is going if you live near one of these august institutions. Of course, we knew about the creationism already. What has shocked me (and angered me, since I went to an ACE nursery and I’d forgotten most of this) is the sexism. It turns out the rigid gender roles and wives-submit-to-your-husbands indoctrination that characterises ACE in later years begins when the pupils are aged three.

And in Britain, public funds are being used to pay for this.

Like everything in ACE, the school day is completely micro-managed, so supervisors don’t have to make many decisions. There are lesson plans for every day which detail what the children and supervisors do, and supervisors follow this by the book. Every day, the children begin by pledging allegiance to the Christian Flag and to the Bible. And for those of you who think that British schools wouldn’t go in for such chest-beating nonsense, here’s a video of the Branch Chistian School, Dewsbury, doing just that:

You’ll notice they pledge allegiance to “the kingdom of Jesus Christ” rather than the Christian flag, because pledging allegiance to a flag is an alien concept in Britain, but otherwise the wording is exactly as it appears in the ACE manual:

I pledge allegiance to the Christian flag, and the Saviour for whose Kingdom it stands. One saviour, crucified, risen, and coming again as King, with life and liberty for all.

I pledge allegiance to the Bible, God’s Holy Word. I will make it a lamp unto my feet and a light unto my path. I will hide its words in my heart, that I might not sin against God.

At Victory (my school), the pre-schoolers said simplified versions of these (“I love the Bible…”). The Christian flag, for those who are unfamiliar with it, looks like this:

Even at pre-school level, the children spend their mornings in little ACE offices, and the supervisor reads stories to them while they complete individual activities.

In science, for example, students have to draw a line from the number to the thing God created on that day: 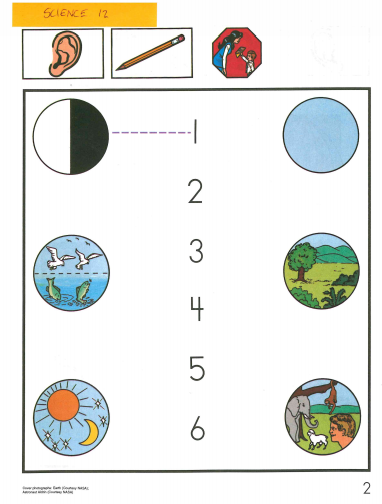 See more of the children’s workbooks here, courtesy of the BHA.

While the children are doing this, the supervisor is reading to them from a script. Here’s part of that script:

Some people have tried to argue that three and four year olds are too young for it to matter what they are taught about science. After all, most of them believe in Santa! It’s OK for children to believe harmless fairy tales, right?

Well, if you seriously think that, lets scrap Early Years education altogether and save a fortune by employing babysitters instead of teachers. The books students complete at this time are called Science. They have the same covers as the science PACEs for older children, and they are shaping the children’s conception of what science is. Misconceptions, once planted in the mind, are the very devil to remove. Especially when you combine them with ACE’s propaganda about the evils of unbelievers and their theory of evolution. Speaking of which…

Walk not with unbelievers

ACE preschool students also have to memorise Psalm 1 before the end of the year (“Blessed is he that walketh not in the counsel of the ungodly…”). Of course, in ACE’s world, “the ungodly” is anyone who is not a True Christian™. So this is an early, concerted effort to stop children from being friendly with outsiders, a major theme of later ACE education. 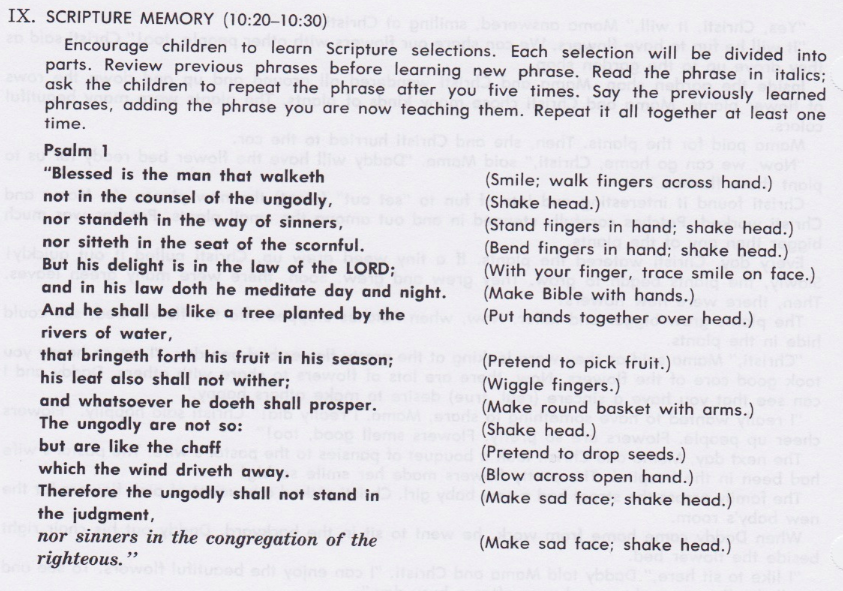 Here’s the bit that annoyed me most. There’s a dressing up game for the children to play. Hooray! A physical activity! Something potentially almost creative! And then the instructions to the supervisor say this:

Lay clothing items out on the table in random arrangement, not according to season groups.

3. Make a pile of the clothes used more during fall, (sweaters, headscarf)

5. Allow the children to take turns playing “dress up” for each specific season.(Be certain to reinforce the masculine and feminine roles by asking the individual children to dress up only in items appropriate for a boy or a girl.)

The italics are in the original. In the pages I’ve examined so far, it’s rare for italics to be used for emphasis. ACE really cares about this.

Later, the children learn about “Mama and Daddy’s roles” in the home. And there’s more gender bias joy:

Discuss Daddy’s “tools,” such as: screwdriver, hammer, Bible. (Daddy needs his Bible most of all.)

Discuss Mama’s “tools,” such as: mixing bowl, spoon, Bible. (Mama needs her Bible most of all.)

I am not happy about this. I am not happy for public funds to go to telling little girls that they must grow up to be helpmeets for their husbands, and that their highest calling is as an obedient wife and mother.

I am not happy for children who don’t fit into traditional neat gender categories to be told they are bad and wrong, and I definitely don’t want to pay for it.

This is not OK.

Please, if you live in the UK, write to your MP about this. The BHA has created a form letter to make it extra easy if you’re pushed for time, but you can use the same form to edit their letter as much as you like (or scrap it and write your own— the BHA’s doesn’t say much about ACE). You can find out if there’s a school in your area from this list (Microsoft Excel file), but even if you don’t live near a nursery of concern, you can still write. This is a Department for Education policy, so everyone in Britain has an interest in this.

Edit: The link to the form letter seems to be down. You can find out more information from the BHA here, and write your own letter at Write To Them.

Edit edit: It’s back up! But I’ll leave the Write To Them link up just in case it goes down again.

March 31, 2014 Your sins will find you out
Recent Comments
0 | Leave a Comment
Browse Our Archives
Follow Us!