I spent the weekend before last at QEDCon, a convention for people who like science and don’t like pseudoscience. While I was mainly there to speak on a panel, I also ended up winning an award after you, the readers of Leaving Fundamentalism, had managed to get this blog shortlisted. This was the Ockham Award for Best Blog, sponsored by The Skeptic.

Here I am receiving the award from Nate Phelps (Thanks to zooterkin for the photo). Nate is an escapee from Westboro Baptist Church, the notorious cult. Of which more in a moment. 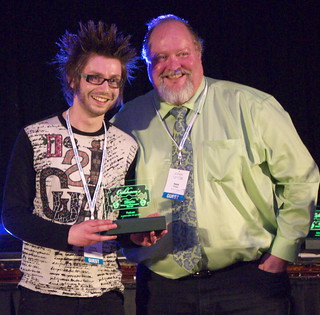 The eagle-eyed among you will notice that the usually-professional Richard Wiseman had in fact furnished me with the wrong award, but I was too busy being pleased to win to notice this:

It’s only that @JonnyScaramanga with his well deserved Ockham. #QEDcon pic.twitter.com/A9RBMtnXxl

And then someone pointed it out, which led to this:

And now… @JonnyScaramanga with the right award! #QEDCon pic.twitter.com/ThyhEYVWxS

Of course, this award is not just for me. So far this year, I think I’ve written less than half the posts on this blog. This is for everyone who has contributed to Leaving Fundamentalism, and thank you all for making this happen. The Ockham Awards are judged by the distinguished panel of Richard Wiseman, Deborah Hyde, Gia Milinovich, Chris French and Wendy Grossman. This award is an important moment for the campaign against fundamentalist education and the credibility of this blog.

A special thanks should go to Anaïs Chartschenko, because her post, “My meaningless diploma“, was one of the five I submitted to the judges for their consideration.

Nate Phelps is, of course, the son of Fred Phelps, the infamous and recently-deceased pastor of Westboro Baptist Church (the “God Hates Fags” people). This led to a storm of comparisons between me and Nate; I think some people are thinking of me as the English Nate Phelps. I don’t think this comparison is deserved, flattering though it is. A lot of things about my upbringing weren’t good, but I was never flogged bloody by a man who ranted about how God hates fags.

Then again, there were far too many similarities between Nate’s story and mine. Nate is a phenomenal speaker. His entire QED talk is on YouTube, and although the quality isn’t great, it’s well worth watching (there are captions). His delivery (and I imagine this is conscious) is the exact opposite of the fire-and-brimstone Baptist preacher. He speaks slowly and quietly, almost monotonously, and pauses often. It doesn’t sound like a gripping recipe, but I, like everyone in that room, was spellbound. I don’t think I took my eyes off him for the entire hour. When Nate was silent, there wasn’t a murmur from the audience. He speaks with dignity even when describing terrible indignities. I’ve rarely been more moved.

All I could think about, though, was how the people I left behind would say that they are nothing like Westboro Baptist Church. To some extent, that’s true. I never knew any strict Calvinists, nor anyone that said God hated any group of people. Of course, I did know many people who said God would send groups to hell for practising immorality, but that God still loved them. The “God hates you” rhetoric is at least more internally consistent. The world I left has some important differences from WBC, but the similarities are more important.

The most frustrating thing is that those I left behind are far too close to WBC for comfort, but they just won’t see it. Nate did a fairly good job of addressing those arguments in his talk—not in any way that would convince the faithful, of course, but who could? This is why I’ve come to think of the term ‘cult’ as unhelpful. ‘Cult’ is a useful devil term that allows churches to dismiss the similarities between controlling, abusive groups and themselves. When I attended the INFORM conference earlier this year, J. Gordon Melton gave the closing address, and he pointed out, as he has many times before, that not so long before the Jonestown Massacre, Jim Jones’s church was considered mainstream in evangelical circles, and held up as a model for other churches to imitate. Melton is often accused of being a cult apologist, but I think that by pointing out how Jim Jones used to be mainline, he makes an important point: There’s no easy distinction between a religion and a cult. Westboro Baptist Church shares vast tracts of its doctrine with conservative evangelicalism. Jim Jones was an ordained Assemblies of God minister. For years, members of the Children of God used Accelerated Christian Education to homeschool their kids.

I’m now wary of the term cult, even though I’ve used it a few times. Mainstream churches can be abusive, while small, new religious movements could be fairly benign. What matters is how people are treated and what the ideas are, not how old a movement is or how many adherents it has. Calling any group a ‘cult’ just lets big, established churches off the hook, and they don’t always deserve that.

I was interested that one of the sermons that influenced Fred Phelps was Jonathan Edwards’ “Sinner in the Hands of an Angry God”, a sermon so bloodthirsty that, according to one eyewitness:

As Pastor Edwards preached, people began crying out for him to stop because they could not bear to hear any more. When he finished, I could hear the cries of those around me, “What shall I do to be saved?” “Oh, I am going to hell!” “Oh, what shall I do for Christ?”  (quoted in Accelerated Christian Education’s Social Studies 1087, p. 7)

I’ve done a vlog about this, because I studied it no less than three times in the course of my ACE education. It sums the whole mess up. According to Edwards, God hated the damned, and in eternity, we would learn to hate them too, and watching them burn would be one of the great pleasures of heaven:

The sight of hell torments will exalt the happiness of the saints forever. . .Can the believing father in Heaven be happy with his unbelieving children in Hell. . . I tell you, yea! Such will be his sense of justice that it will increase rather than diminish his bliss. (“The Eternity of Hell Torments“, 1739)

This ideology has a distinguished history with the church fathers; there are still Christians that believe this today. And it is the ideology that fuelled Fred Phelps.

April 28, 2014 You might be a fundamentalist, but at least you're not brown
Recent Comments
0 | Leave a Comment
"While it sounds like he has switched to the church of the Daily Show, he ..."
D'artagnan An atheist wrote the theme tune ..."
"I wish I knew about this blog years ago. I'm glad it's still here. Thank ..."
Ralph Facter It’s time to move on from ..."
"Gibbs III is also responsible for the ludicrous 'Terri Schiavo has changed her mind!' argument. ..."
Astrin Ymris The Fixer: Christian lawyer’s history defending ..."
"ACE does not control any of these schools. ACE only provides the curriculum and program. ..."
mccartherable . Top 3 ACE School of Tomorrow ..."
Browse Our Archives
get the latest from
Nonreligious
Sign up for our newsletter
POPULAR AT PATHEOS Nonreligious
1