This week in Christian Rock Thursdays: Christian musician becomes an atheist. In the Christian music scene, a brief internal panic ensues. After Christian rock came Christian metal, and then, inevitably, Christian thrash. The first ever Christian thrash band was Vengeance, who hastily had to rename themselves Vengeance Rising when they discovered a secular band of the same name (this is becoming a recurring theme). Roger Martinez, the singer, sounded horrible to me when I was a kid, and sounds ridiculous now. “White Throne” appeared on the Heaven’s Metal compilation album, though, so obviously someone liked it.

Because of Martinez’s delivery, the lyrics are almost unintelligible. That’s a shame, because it’s actually comedy gold:

To turn the grace of God into licentiousness

To teach false doctrine based upon presupposition myths

Therefore repent or this is what you’ll get

Even though I didn’t like Vengeance Rising, I respected them as Christian metal pioneers, much as secular metal fans admire Venom for their contribution to the genre. Vengeance Rising blazed the trail. They plagiarised secular thrash bands first, opening the door for other Christians to plagiarise other extreme metal bands. Then something terrifying happened: Roger Martinez came out as an atheist. This caused a bit of a stir among Christian metal fans. Most frightening of all was the possibility that if as committed an evangelist as Martinez could lose faith, it could happen to me too. When I discovered Martinez was an atheist, it left me badly shaken. I first heard about this in a 1997 issue of HM Magazine. This publication was originally called Heaven’s Metal. Then they realised that name was horribly embarrassing, so they shortened it to HM, with the tagline Your Hard Music Authority, presumably hoping that people would forget was HM actually stood for. HM ran regular “Where are they now?” features on Christian metal pioneers, and with the Vengeance Rising interview came the shocking truth about Martinez.

I can barely describe how chilling it was to hear Martinez call himself an atheist. Imagining that anyone could be an atheist was like trying to contemplate what it would be like if the universe had never existed. It was worse than that. Devil worshippers, of the goat-sacrificing blood-drinking variety (who I thought were real, and not just an invention of televangelists for propaganda purposes), were understandable: like me, they believed in a spiritual battle between God and Satan. They were just betting on the opposite side. I could also handle people who followed other religions: like me, they accepted the reality of the supernatural and the divine. They had simply been deceived by Satan into believing something that was so near, and yet so far, from the truth.

Atheists were something else entirely. They were like something from the most nightmarish dystopian sci-fi. They claimed not to believe in God at all. They were humans without souls. Worse, if you told them they had no souls, they would agree with you. I never spent any time thinking about the possibility that God might not exist. Of course God existed; everyone knew that. It was just obvious. So meeting someone who said they didn’t believe in God was a genuine threat. If God’s existence wasn’t just something I could take for granted, then I’d need some evidence. Yes, we Christians talked about faith all the time, but faith meant trusting God and doing what He said. Faith wasn’t really about believing in God; I knew God existed. It rattled my cage for someone to point out that I didn’t have any solid reasons to ‘know’ this.

Usually when confonted with ‘backsliders’, we’d insist that the unbeliever had never been a true Christian. After all, someone who’d had a genuine saving experience of Christ like I had could never fall away from faith. I’d met Jesus as my personal saviour. But it was difficult to claim that Martinez had never believed: he’d been a pastor, ordained by other definite True Christians who, when they’d appointed him, had felt the leading of the Holy Spirit. And Martinez, it was claimed, had led hundreds of young people to the same saving knowledge of Jesus Christ that he had known. Thus, the article in HM magazine, which is not so much about Roger Martinez is it is about how the Christian reader should respond. There’s a sudden rush of interest in apologetics, the study of arguments in favour of Christianity, which were otherwise rarely mentioned. It wasn’t Roger we were worried about; it was our own faith. That was what creationism was really about: easing doubts about God by appeal to science. The HM article itself made sure to get in a passing swipe at evolution, claiming it involved “intrinsic racism” (ironic, given creationism’s history).

It helped that some of Martinez’s arguments weren’t very good. He claimed that when he was a believer he was a schizophrenic, and argued that the interviewer  was also schizophrenic for believing he could communicate with God. I don’t think mental illness is a good explanation for evangelical faith, and HM also dismissed much of what Martinez said by claiming that he had, until shortly before the interview, been “raving mad”. They also associate Martinez’s argument with that other old enemy of faith and freedom, the USSR:

It is interesting that the label of “schizophrenic” has been used here, as this is not a term that one simply wakes up one day and applies to himself. It is very similar to the way belief in God was officially treated in the Atheist State of the former USSR, where Christians were sentenced to mental hospitals.

Still, some of what Martinez said hit hard:

I’m telling you, had you been born in Iran, you would have believed Allah to be God, and Muhammad His prophet. I’m telling you, you would go to death for that belief, because you would believe that anybody who attached Jesus as a Trinitarian in the Godhead was a condemned infidel to the Hell fires. And of course, in your perspective right now, they’re condemned to the Hell fires for denying Jesus as the Christ. So, yes, I was truly in that belief at the time.

This argument that rocked my faith when I was confronted by it again in Richard Dawkins’ essay “Viruses of the Mind” several years later. I’d forgotten Martinez used it until I dug the interview out to write this post. It must have been one of the first seeds of doubt that was ever sown in my mind, although I stayed a committed believer for many years after this. Like most HM readers, I expect, I tried to put this interview out of my mind pretty fast after I read it. But it obviously struck a chord, because I’ve never forgotten it. The authors reassured themselves (and the readers) that Christians could “blow away” atheists in a rational debate (without actually reviewing the details of these debates). But the writer (who I think was HM editor Doug van Pelt, but the web page doesn’t say) shared my unease:

It’s almost mind-blowing to fathom how someone with so much apparent regard for the authenticity of Scripture and the existence of God could now flip- flop entirely. It certainly inspires one to sharpen one’s skill in “giving an answer for the hope that is within,” but it also shows the limitations of apologetics itself. While many can debate and blow away atheists in public and private debate (check out the taped debates between atheist Dr. Gordon Stein and Greg Bahnsen), apologetics most often work to reaffirm a believer who questions why he believes something and has an answer there to fill the question’s hole, without needing to return there again. As much as it can cause someone to think, apologetics perhaps does more for the believer than the non-believer. Many reading this have probably been in a heated debate or two that was not resolved with repentance by either party, so was this conversation unable to open Roger’s eyes to the fallacy of atheism and the rational sense of Christianity. Then again, we did not expect to convince someone in 60 minutes what has taken a few years to adopt.

This is a remarkably frank and honest assessment of the truth of apologetics arguments. They exist to reassure believers, and they’re ineffective at converting skeptics. Believers use them by reassuring themselves that there is a good rational argument for Christianity, and then, most often, forgetting about it. This is a great strategy for handling threats to your personal faith. By forgetting the details of these arguments, you’re unlikely to notice any weaknesses in them. When a skeptic debated me, I’d often end up thinking, “Well, I don’t have an answer for these points, but I know that great apologetics books like Evidence That Demands a Verdict more than take care of these questions.” I would direct my skeptical opponent to those books, but I rarely read them myself. I didn’t need to; I knew the conclusions. I was confident that better minds than mine had debated these questions and settled in favour of Christianity. I didn’t need to know these answers for myself, necessarily, I just needed to know that they existed. Eventually, when I got to university, I felt the need to confront these questions for myself. It turned out for me, much as it had for Roger Martinez, that evangelical apologetics was depressingly weak.

December 2, 2014
Jonny Scaramanga on the Godless Spellchecker podcast
Next Post 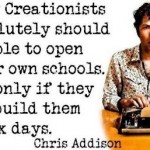 December 9, 2014 The Government's policy on creationism makes no sense
Recent Comments
92 Comments | Leave a Comment
Browse Our Archives
get the latest from
Nonreligious
Sign up for our newsletter
POPULAR AT PATHEOS Nonreligious
1

'Joseph Masturbated In The Corner, Too'...
Laughing in Disbelief
Related posts from Leaving Fundamentalism