I’ve done some Internet sleuthing, and it looks like the science teacher in question has a long history of teaching at creationist schools. It’s against the law for Free Schools in England to teach creationism. If the teacher, David Hagon, has indeed taught creationism as science in his past roles, it must be asked how he was given the job at Durham Free School.

Schools Week has discovered David Hagon, a teacher at the school, in September asked year 7 pupils to complete a worksheet as part of their science homework that stated God was responsible for the design of the solar system.

The worksheet (pictured) said: “Only the Earth has life on it. God has designed the solar system so that the Earth can support life.”

Any school, academy or free school that is found to teach creationism as a scientific fact would be in breach of the law and its funding agreement.

A spokesperson for Durham Free School said: “Legitimate concern was raised over this matter as the worksheet was in clear contradiction of the school’s policy and practice.

“It was an isolated incident, which the former headteacher dealt with promptly, firmly and appropriately; the worksheet is not used by the school.

An isolated incident? According to the Northern Echo, a parent claimed otherwise. It all seemed fishy to me, so I searched online for the phrases “David Hagon” and “Christian school”. I just had a hunch.

STAFF, parents and pupils at a Sale-based Christian school are celebrating after receiving a glowing report from Ofsted.

Accompanying the article is a photograph of a staff member with the students, and the caption reads “Deputy Head David Hagon with some of the pupils”.

1) Did Christ the King School teach creationism?
2) Is this the same David Hagon that has recently taught at Durham Free School?

1) Yes. CTKS (which closed in 2008) was a member school of the Christian Schools Trust (CST), a network of private evangelical schools in the UK. Sylvia Baker was one of the founders of the CST, and she produced a PhD thesis about it. Here are some notable quotations from that thesis:

The [CST] schools may well constitute the only setting within the United Kingdom where science education is approached within a creationist framework. [pp. 150-151]

The schools themselves claim that, in addition to placing all of their educational practice within a Biblical creationist framework, when it comes to science education they teach creationism alongside evolution as a debate. [p. 166, see also p. 168]

Appendix 3 then contains a statement, agreed by all member schools of the CST, which as my friend and colleague Paul Braterman puts it, is “a skilfully crafted instrument for teaching evolution in such a way that it will not be believed”.

So a David Hagon was the deputy head of a school that undoubtedly taught creationism as science.

2) Was it the same David Hagon teaching at Durham Free School?

Probably. I can’t prove he is, but it seems only a remote possibility that there could be two creationist David Hagons. I did a search on the Electoral Roll for David Hagon. In the 2002 register, there were 19 matches (the most of any year); for 2015, just 11. According to British Surnames:

Given what a small minority creationists are in England, it’s not massively likely that there are two creationist science teachers called David Hagon, is it?

Hopefully, a Durham Free School parent or pupil will be able to look at the photo from Christ the King School and confirm whether this is indeed the same David Hagon.

I’m not finished. Google has another match for “David Hagon” and “Christian school”, and it’s from Emmanuel College in Gateshead. According to the article, someone named David Hagon was “Head of Electronics” at the school.

The name “Emmanuel College Gateshead” may ring a bell for you. That’s because it was embroiled in a massive row over creationism. Scientists both Christian (John Polkinghorne) and atheist (Richard Dawkins) criticised the school’s science teaching, and it was noted that the school had allowed its hall to be used for an Answers in Genesis meeting. The school’s head of science, Steven Layfield, had previously been a director of the creationist organisation Truth in Science.

So if I have correctly identified this David Hagon, he has previously been in a senior position at one private school where creationism was explicitly taught, and one state-funded academy where it was allegedly taught. Yet somehow he was teaching science at a Free School where it is a condition of the funding agreement that creationism is not taught as science. It looks something went badly wrong with the vetting procedure for staff at Durham Free School. 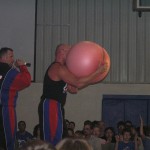 February 27, 2015
The Power Team, or how evangelicals accidentally lie to kids
Next Post 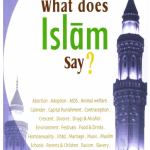 March 4, 2015 Hardline Muslims and conservative Christians: so much in common
Recent Comments
0 | Leave a Comment
Browse Our Archives
get the latest from
Nonreligious
Sign up for our newsletter
POPULAR AT PATHEOS Nonreligious
1

'Satanic' school head, pictured with a...
The Freethinker
Related posts from Leaving Fundamentalism