British webzine Christian Today has just run a very important article. It’s called Ten Christian T-shirt Puns to Save the World. Evangelicals know they possess the only answer to our eternal destruction, and it’s nice to see that they’re taking their responsibility to rescue us from hell seriously.

I’ve said it before: evangelicals don’t really believe in hell. If they did, they’d be trying harder to save us. On the evidence of these T-shirts, they aren’t trying at all. 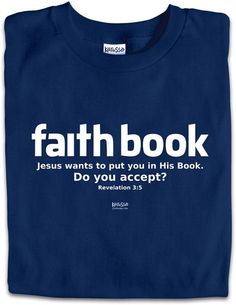 This one shows the formula: you rip-off a corporate logo (legally, because parody is a protected form of free speech under the US Constitution), work in a tortured mention of Jesus (he’s used to being tortured by now, so he won’t mind), and for bonus points include a Bible reference (you can just see ‘Revelation 3:5’ in the above picture). Here’s a fun game: If you see someone wearing a T-shirt like this, ask them what the referenced Bible verse says. I wore a T-shirt that alluded to Philippians 1:6 for years with not a clue what it said. 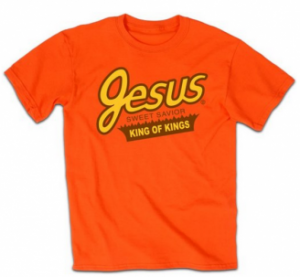 Christian Today suggests of this pastiche of Reese’s Peanut Butter Cups, “What better way to seamlessly engage with a consumer culture?” I honestly can’t tell if the author is being sarcastic, but it does point to a genuine problem: These T-shirts are implicitly consumerist, and it’s weird how comfortable Christianity seems with this while painting its founder as a hero for the poor and downtrodden. One of the T-shirts in the article clearly shows a Gildan label, and Gildan has, putting it mildly, used questionable labour practices.

When I was growing up, this was the most popular Jesus shirt design: 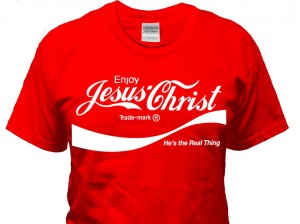 I guess this is the more recent equivalent: 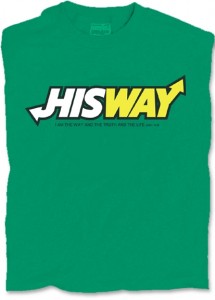 This one works a lot better if you are an evangelical than if you’re not, because to them any reference to Him or His is a reference to God. That’s another feature of these shirts: despite their ostensible purpose as tools for evangelism, they often have an in-joke quality. That’s because what these shirts are really about is marking your identity. There are costs to wearing them, because people might think you’re a bit weird or possibly mock you. But there are advantages, because you get a greater sense of belonging to a group, and you get higher status in that group because it shows how committed you are to Jesus.

And, in fact, the perceived costs are mostly in your mind. When I was 10, I had a black T-shirt with picture of what I think was meant to be a crocodile wearing a leather jacket and riding a motorbike. The slogan on it said “God’s Triumph is better”. God’s Triumph, geddit? Every time I wore it, I felt I was making a brave statement, and I might be attacked for my faith. In fact, no one ever commented on it.

So, evangelicals, stop pretending these T-shirts are for ‘the lost’. They’re for you. And that’s fine. When I wear my Batman T-shirt, I do it because I like Batman, not to recruit other people to the cause of Batmanning, and it’s the same when you wear your ridiculous FBI T-shirt:

I am not a Christian because I do not think that God exists. My mind is very unlikely to changed on this by the cleverness of your puns. God continues not existing whether I am listening to a terrible Christian band like Messiah Prophet or a relatively good one like Jars of Clay. If you come up with a really clever slogan, I will still not think that God exists. The fact that evangelicalism is achingly uncool is just an amusing sidenote.

Because Christian Today is a UK-site, there are some interesting cultural differences from US-evangelicalism. The article’s author, Martin Saunders, begins by acknowledging that wearing these T-shirts is embarrassing, and there are moments of knowing wit elsewhere that indicate Saunders is aware this is all a bit silly. In my teens, I visited churches in Missouri, Texas, Oklahoma, and I witnessed no such self-consciousness there. This foot-shuffling embarrassment is a feature of English Christianity, and Saunders writes candidly:

if we’re honest, sometimes few of us have the bottle to go outside in a Coke-themed ‘Jesus Christ – He’s the real thing’ T-shirt. Unless of course we’re on our way to church. By car.

But nevertheless, Saunders thinks it’s “a shame” that he and his fellow god-botherers don’t want to be seen in these preposterous garments “for many reasons – mainly evangelistic ones”. Yes, Saunders thinks that wearing a T-shirt with the right Jesus-inspired slogan might realistically help someone get born again.

To recap, then: Evangelicalism is the belief that all humans deserve to burn in eternal fire, but God, in his infinite mercy, has provided a solution: salvation freely available to all. There is a problem, though: we can only receive this salvation if we hear the news and accept it. It is therefore absolutely crucial that we hear this news in the most persuasive form possible. God has entrusted this—the most important mission in the history of the world, on which all our eternal fates rest—primarily to a bunch of white men in sandals.

Knowing the critical importance of their mission, these white guys realise they have to get the message across in the most powerful way. After careful thought and planning, they have settled on playing shitty U2 ripoff music and wearing pun-based T-shirts.

If you can believe that this is all planned by a God of infinite wisdom, you are indeed a person of great faith.

Believe I’m going to hell? You’re either insincere or don’t care. Pick one.

Cool, not, and five other ridiculous words my Christian school tried to ban

Credit for this post’s excellent title goes to Dale McGowan, Patheos Atheist editor and author of Parenting Beyond Belief. On Patheos, his blogs are at The Secular Spectrum. 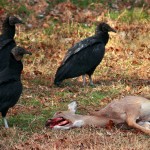 March 19, 2015
Another ACE school bites the dust: this is the beginning of the end
Next Post 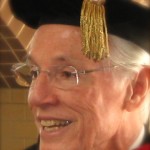 March 23, 2015 Why Bob Jones III didn't actually apologise to gay people at all
Recent Comments
0 | Leave a Comment
"While it sounds like he has switched to the church of the Daily Show, he ..."
D'artagnan An atheist wrote the theme tune ..."
"I wish I knew about this blog years ago. I'm glad it's still here. Thank ..."
Ralph Facter It’s time to move on from ..."
"Gibbs III is also responsible for the ludicrous 'Terri Schiavo has changed her mind!' argument. ..."
Astrin Ymris The Fixer: Christian lawyer’s history defending ..."
"ACE does not control any of these schools. ACE only provides the curriculum and program. ..."
mccartherable . Top 3 ACE School of Tomorrow ..."
Browse Our Archives
get the latest from
Nonreligious
Sign up for our newsletter
POPULAR AT PATHEOS Nonreligious
1

How (and Why) Evangelicals Blow Their...
Roll to Disbelieve
Related posts from Leaving Fundamentalism 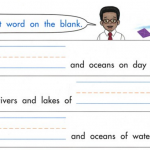