Be afraid. Be very afraid. What you see next is straight from the Reverend’s Church’s web site. And there’s worse to come.

And as for Noah’s Ark, a search on “Alva Baptist Genesis” turned up this:

(What is shown here is an earlier model. There is now a full size version of the Ark, certified as seaworthy, but what many visitors may not realise is that these Arks are wooden skins over steel supports and resting on barges).

The same web page links us to a video in which we are told that “Experts are 99.9% sure” that they have found fragments of Noah’s ark on – where else? – the slopes of Mount Ararat 2 1/2 miles above sea level. Straw in the wreckage is said to radicarbon date to “when Noah was afloat”, and “Skeptics are, as usual, skeptical, but for those who believe in the Bible literally, Noah’s Ark is a major find.”

The Reverend David Fraser is a Baptist, but this is an extremely broad description. For example, Steve Chalke, who was recently drummed out of the Evangelical Alliance for rejecting biblical literalism, is a Baptist minister. So to see what David Fraser believes, we have to dig a little deeper.

Fraser hails from Metro Calvary Church, Los Angeles, whose statement of belief includes biblical infallibility and inerrancy, obviously to be taken in a literal sense, a historical Adam and Eve, and that “man is totally depraved and of himself utterly unable to remedy his lost condition.” The Church also believes ” in the bodily resurrection of both the just and the unjust — the unjust to judgment and eternal conscious punishment in the lake of fire”.

You may be wondering why someone who believes that children are totally depraved and, unless they receive justification through God’s grace, are destined to eternal punishment in the Lake of Fire, is doing sitting on an Education Committee, rather than being locked away from them at a safe distance. Let me explain.

The educational systems of both England and Scotland emerged in something like their present forms in the late nineteenth and early twentieth century, by the coming together of secular and church schools (a process that the last two administrations have done much to reverse). This led to the representation, as prior stakeholders, of the Churches. But which Churches?

In England, the answer was obvious; Church of England, and Roman Catholic.

And so, to this day, every Local Education Authority in England has, by law, one full voting member appointed by the local Catholic diocese, and one appointed by Church of England.

In Scotland, as the diagram here shows, it’s more complicated. From the Great Disruption of 1843 onwards, the dominant Presbyterian church in Scotland was split between two major factions; the Church of Scotland, and the Free Church (after 1900, the United Free Church) of Scotland. This schism was not healed until 1929, after the original Church of Scotland was disestablished. Meantime, various factions had split off in the process, to give a bewildering collection of splinter groups, mainly theologically conservative and even biblical literalist, as is the faction that, after a legal battle that went all the way to the United Kingdom’s highest court, won the right to call itself, at it still does, The Free Church of Scotland.

So during the formative years of the State school system, there were two major contenders for the role of leading Protestant Church in Scotland, and for this reason, to this day,

every local authority in Scotland (i.e., now, every Council) must have, on its Education Committee, three religious appointees, one Roman Catholic, one Church of Scotland, and one other.

The rules for pointing this “other” vary from authority to authority, but with major over-representation of the splinter groups referred to above, and their allies among theologically conservative Baptists such as David Fraser.

When, today, I checked on the website of David Fraser’s Alva Baptist Church, it had become much more difficult to navigate. It still tells us that ” We believe that God has big plans for this wee church and town of Alva”, but links to the Church’s specific beleifs, and to the Reverend’s “complete profile”, were dead. However, “Evangelical resources” took me to a page for Ray Comfort’s Living Waters, which in turn took me to the hard line Creationist Evolution Vs. God, endorsed by Answers in Genesis, the Institute for Creation Research, and Creation Today. All of whom believe, and consider it praiseworthy to believe, that all people and animals on Earth today are descended from a handful in the Ark who survived a world-wide flood covering the mountain tops, just at the very same time that the Egyptians, miraculously unperturbed, were in the middle of building the Pyramids.

And David Fraser, let me remind you, sits unelected on, and has full voting rights on, the Education Committee that decides policies and spending priorities for Clackmannanshire.

Nor is he unique. Among other examples, representatives on the Councils of Falkirk and North Ayrshire maintain that unbelief will be justly punished by a Hell that is physical, literal, and eternal. In South Lanarkshire, home to the Kirktonholme scandal, Nagy Iskander maintains that science and biblical creationism have the same degree of intellectual merit.

And the voice of these unelected representatives is no minor matter, since, as the Church of Scotland tells us, they hold the balance of power in 19 out of Scotland’s 32 Council Education Committees.

Is this what we really want?

This article is reposted with permission from Paul Braterman’s blog. 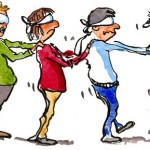 March 31, 2015
Your Quaint, Silly, Ridiculous, Little Faith Is Not Lovely to Me
Next Post