The sacrifice of reason

I’m always jealous of people who seem to have been born inquisitive. When you talk to some humanists about their religious upbringings, it sounds as though they were constantly following their parents and Sunday school teachers around asking difficult questions. I have images of four-year-olds tugging on their mothers’ dresses and going:

Mummy, after the Ark landed on Ararat, how did the kangaroos, platypuses, and koalas get to Australia without leaving any evidence of the journey?

Mummy, if the seas flooded all the lakes, how did the freshwater fish survive the Flood, and does this mean Noah also had to have two of every fish on the Ark? Where did they go?

Mummy, when God punishes Cain, Cain says “I shall be a fugitive and a wanderer on the earth, and anyone who meets me may kill me”. If the only people on Earth were Adam and Eve’s family, who are these people Cain is worried about?

Mummy, if God didn’t make the sun till Day 4, how were there evenings and mornings before that?

… and so on, until they are told to shut up and have faith.

I really wish I had been one of those kids. I wasn’t. I was trained in obedience from before I can remember, and part of that was just being… uncurious. As a kid, of course, I learned the proper way to behave from adults, and I just came from a culture of credulity. It’s a kind of natural selection, I suppose. People who habitually ask difficult questions eventually leave for agnosticism or atheism, or at least churches where some application of brain power was allowed, leaving our church with only the unwary. Every week, we’d hear testimonies like:

Last week I went to the doctor for a scan, and he said that there was a tumour on my kidney. So I went to the midweek prayer meeting on Wednesday, and all the elders laid hands on me and told the tumour to be gone in Jesus’ name. And then when I went back on Friday, the doctors said they couldn’t find any sign of the tumour. Praise the Lord!

The correct response at this point is not to put your hand up and say “Have you considered the possibility that this was just a misdiagnosis? Because they are pretty common, you know.” No one ever told me not to do that. You just learn that the correct response is to go “Praise the Lord!” and not “Maybe the scanner was faulty.”

But even so, I was unusually accepting. I wasn’t repressing my questions. I just didn’t have them—except one, and it’s the topic of Neil Carter’s latest post, “But Why Does There Have to Be Blood?”

There are lots of ways Christians have understood the meaning of the crucifixion, but like Neil, I grew up with the penal substitutionary atonement. This has the distinction of being a) the most barbaric, and b) (entirely coincidentally, I’m sure) the most popular with white evangelicals. Here’s the story as I understood it:

When you sin, the punishment is death. This is just a law of the universe; there’s no way around it. But it’s possible for something else to take that punishment. That’s why in the Old Testament, priests sacrificed animals in the temple. God’s wrath was poured out on the animals instead of the people, so the people didn’t have to be burned in a fiery hell. This was OK, but not wholly satisfactory because it was messy, and because animals, being a bit dodgy themselves, could only atone for sin temporarily. You had to keep killing them at regular intervals to avoid aforementioned fiery hell death. But when Jesus died, because he was the Son of God, he took the punishment for all people for all time, so we don’t have to sacrifice animals anymore. Yay!

This story does not make a damned bit of sense. The worst stuff about it didn’t bother me as a child, because when you’re raised with an idea, it doesn’t seem strange to you. It didn’t bother me that this theology makes God into a bloodthirsty tyrant. It didn’t even seem out of place that killing an animal could be thought suitable penance for a crime (“Hi neighbour, sorry I swore at your kids earlier. How ’bout I slit this sheep’s throat and we’ll call it even?”).

The thing that bothered me was that there was only one Jesus, and there were quite a lot of us. I couldn’t figure out how one Jesus, however perfect he was, could substitute for billions of people. Here we were, told that this bloodthirsty God demanded the death of all of us, but his wrath had been sated by the death of one. If you’d promised me a million Lego bricks, my reasoning went, I would probably not be satisfied with one really good brick, not even if it was the best brick ever.

That was the only difficult question I ever asked my mum, and she completely punted on it. As in, she actually went “I think we need to talk about that another time,” and that was the last we spoke of it.

But of course, the faith I come from doesn’t require things to make sense. God was bigger than us, and smarter than us, so we should not expect to be able to understand. It would all make sense when we got to heaven, and until then, we just had to trust God.

In 2013, I shared this on the Leaving Fundamentalism Facebook page: 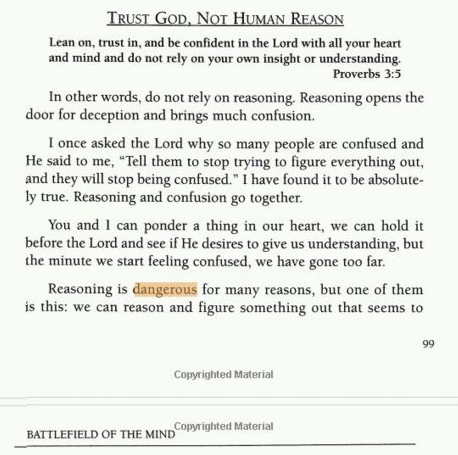 It’s from Joyce Meyer’s book, Battlefield of the Mind. I could produce dozens of quotations from other preachers making the same point. Critical thinking was frowned upon in the churches of my youth. No one seemed to see that this was weapons-grade irrationality. The same argument could be used to justify any belief. It meant that any position, once accepted, was impossible to disprove on its own terms. While it’s not always taken quite to Meyer’s extremes, this is the kind of thinking that is necessary to sustain this kind of Christianity, and it’s dangerous.

So if you have one of those kids who follows you around asking difficult questions, treasure them. Indulge them. Give them the best answers to their questions you can, and teach them where to go for answers you don’t know. Teach them not to accept being fobbed off. The world needs kids like them.

June 21, 2016 Leaving Fundamentalism now on Facebook Live, Pinterest, Google+ and more
Recent Comments
0 | Leave a Comment
"While it sounds like he has switched to the church of the Daily Show, he ..."
D'artagnan An atheist wrote the theme tune ..."
"I wish I knew about this blog years ago. I'm glad it's still here. Thank ..."
Ralph Facter It’s time to move on from ..."
"Gibbs III is also responsible for the ludicrous 'Terri Schiavo has changed her mind!' argument. ..."
Astrin Ymris The Fixer: Christian lawyer’s history defending ..."
"ACE does not control any of these schools. ACE only provides the curriculum and program. ..."
mccartherable . Top 3 ACE School of Tomorrow ..."
Browse Our Archives
get the latest from
Nonreligious
Sign up for our newsletter
POPULAR AT PATHEOS Nonreligious
1