Rebirth of Our Nation review: introduction

I have decided to review Donald R. Howard’s 1979 classic Rebirth of Our Nation. You have almost certainly never heard of this book, but if you’re interested in this blog, you’ll want to know about it.

Donald Howard was the founder of Accelerated Christian Education, and Rebirth of Our Nation is his manifesto, not just for education (although there’s a lot about that), but also for the way the world should be. It’s actually his second book, after the earlier To Save a Nation, but ROON contains almost all of the earlier book, plus some more stuff. Howard went on to write two more books with melodramatic titles—1988’s Teen Turmoil and 1990’s Crisis in Education: Public education a disaster… but there’s new hope for parents!—but they both essentially repeat the contents of this one. 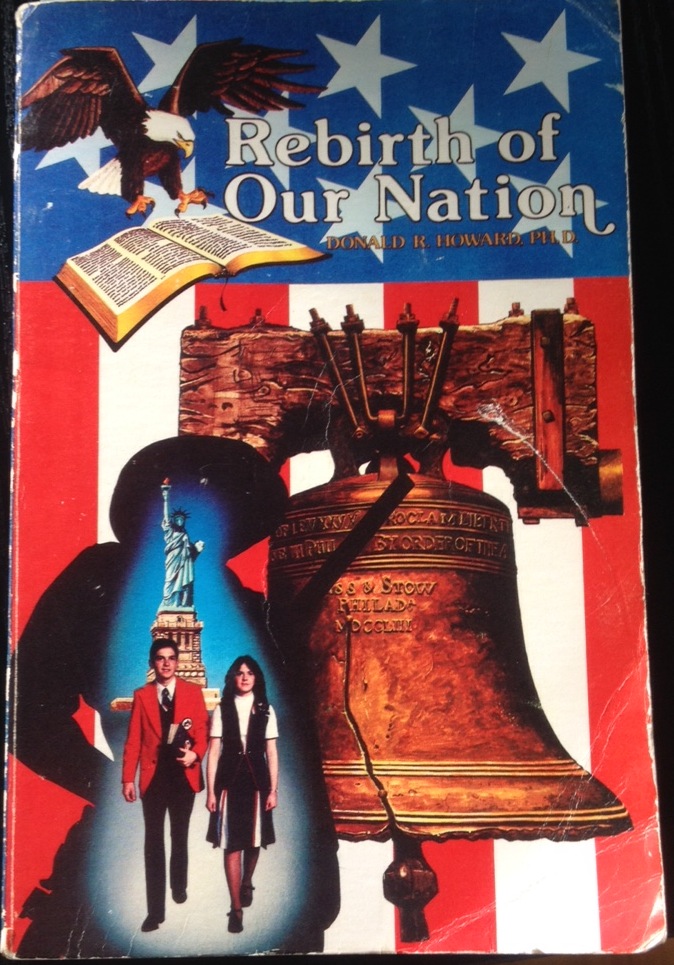 Howard’s book is a good, early example of Christian Right literature. If you’re wondering how we got to the point we’re at today, where the US Republican Party is so far to the right, the roots of the Christian Right movement are part of the explanation. Many of the things Howard advocates in this book are now Tea Party staples. George Marsden, the foremost historian of US fundamentalism, notes five fundamentalist themes:

(My summary is based on Roger S. Hunter’s, from his doctoral dissertation)

All of these themes are highly visible in Howard’s book, and although he was far from the only one writing on the subject, he was very successful in exporting these views around the world. He also had the endorsement of (at the time) fundamentalism’s biggest heavyweights. The back cover has endorsements from Jerry Falwell (now dead), Jack Hyles (now disgraced), and RJ Rushdoony (dead):

Rushdoony: A war is on, and if you are unaware of it, you will be on the casualty list of God and man. This war is humanism’s war against Christianity. In his book, Rebirth of Our Nation, Dr. Donald R. Howard gives us an account of that war, and some battle strategy. Read it, and join the battle. The real division in the church today is no longer in terms of the old controversies, but is between those who are active in the battle against humanism and those who are not. As an active fighter in this battle, Dr. Howard issues a call to action.

My plan with this review is largely just to summarise the contents as fairly and accurately as I can. For the most part, I won’t be adding much commentary of my own because I don’t think it’s necessary. What Howard claims in this book is outrageous, and I am quite confident that any vaguely reasonable person, regardless of their religious views, will be able to see that. Whenever I read this book, I find myself slack-jawed that anyone could read it and think what Howard says is a good idea. Evidently, some people did. But I’m also pretty sure that quite a lot of people who support Accelerated Christian Education have never read this, and I suspect a few of them might be shocked at how extreme it is.

While I was reading the book, I placed a bookmark every time Howard said something I thought was especially absurd or offensive (and this, remember, is after I’d already been exposed to Howard for years). Here’s what my copy looks like now: 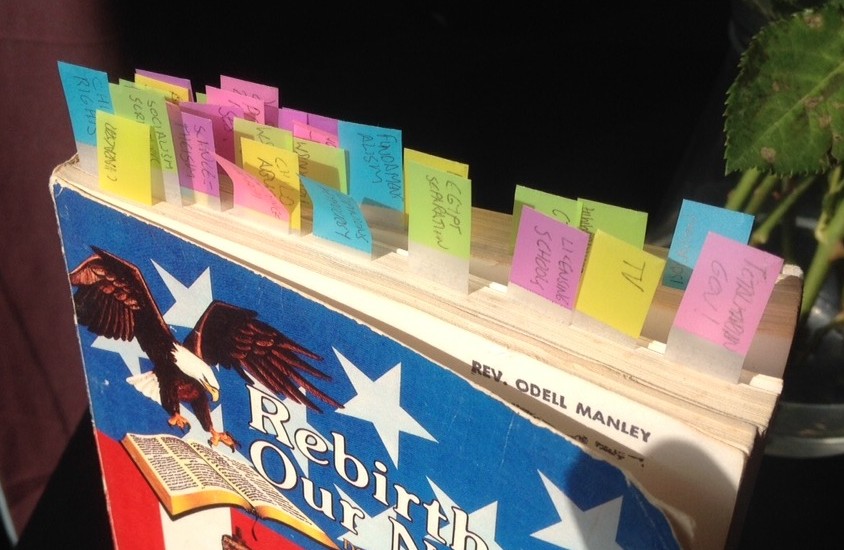 Donald Howard isn’t involved with ACE anymore—he got booted from the company after his divorce in 1998, and he died in 2013. But there are two reasons why this book is still relevant. One is that ACE has not substantially changed since Howard was in charge. I haven’t officially passed my PhD yet, so I can’t tell you the findings, but let’s just say I didn’t find a lot of differences between current editions of the PACEs and ones from the 1970s and 1980s.

In 2005, Lisa Kelley completed an Ed.S. degree in school psychology on the subject of ACE, and she tried to 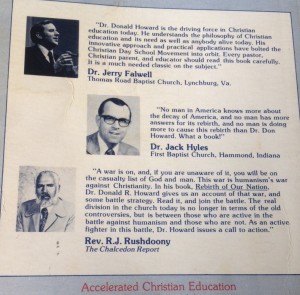 find out whether Howard’s books were still relevant. In her dissertation, she describes speaking to an ACE representative who assured her it was still “the same old ACE” and that Howard’s ex-wife, Esther Howard, ran ACE with the same ideals. Even if ACE had changed in the last couple of decades, this book would still be useful in explaining what happened to me and every ACE student of my generation and older, but as it happens, the reach goes further than that.

For most school systems, the founder’s views don’t necessarily make that big an impact on each student’s individual experience. That’s not the case for ACE. Because ACE consists of a series of workbooks that students complete individually, the content of the workbooks, to a large extent, shapes the students whole experience of school. In ACE, those workbooks are filled with Howard’s political beliefs. As Hope Elkins writes in her 1992 PhD dissertation on ACE schools: “it was increasingly apparent as the research progressed that the personal beliefs of A.C.E.’s founder and president, Dr. Donald Howard, are almost totally incorporated in the curriculum procedures and materials”.

It is that total incorporation that makes understanding Howard so important, and that’s why I’m doing this series.

As we read on, I’ll have many questions: 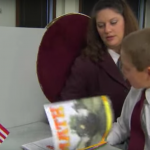 August 18, 2016 Christian teacher on ACE training: "I was being indoctrinated"
Recent Comments
0 | Leave a Comment
Browse Our Archives
get the latest from
Nonreligious
Sign up for our newsletter
POPULAR AT PATHEOS Nonreligious
1