The Power and the Glory

At the beginning of his 2011 The Kingdom and the Glory: For a Theological Genealogy of Economy and Government (Meridian: Crossing Aesthetics)

, Girgio Agamben raises the question that, he thinks, students of political ceremonial (like Ernst Kantorowicz) fail to ask: “Why does power need glory? If it is essentially force and capacity for action and government, why does it assume the rigid, cumbersome and ‘glorious’ form of ceremonies, acclamations, and protocols? WHat is the relation between economy and Glory?”

His answer states the fascinating thesis of the book:

“The analysis of doxologies and liturgical acclamations, of ministries and angelical hymns turned out to be more useful for the understanding of the structures and functioning of power than many pseudo-philosophical analyse of popular sovereignty, the rule of law, or the communicative procedures that regulate the formation of public opinion and political will.” He acknowledges that “Identifying in Glory the central mystery of power and interrogating the indissoluble nexus that links it to government and oikonomia will seem an obsolete procedure to some.” But Agamben argues on the contrary that “the function of acclamations and Glory, in the modern form of public opinion and consensus, is still at the center of the political apparatuses of contemporary democracies.”

The media’s power is precisely here: Media have power “not only because they enable the control and government of public opinion, but also and above all because they manage and dispense Glory, the acclamative and doxological aspect of power that seemed to have disappeared in modernity. The society of the spectacle . . . is, from this point of view, a society in which power in its ‘glorious’ aspect becomes indiscernible from oikonomia and government. To have completely integrated Glory with oikonomia in the accalamative form of consensus is, more specifically, the specific task carried out by contemporary democracies and their government by consensus ,” a notion that Agamben says originated not with the Greeks but “in the dry Latin of medieval and baroque treatises on the divinegovernment of the world” (p. xii).

It’s an extreme “Protestantism” – the penetration diffusion of Glory once contained in sacramental ceremonies into the whole of society. 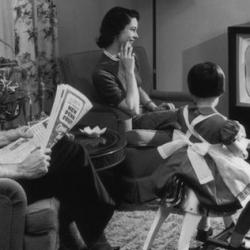