“Though He slay me, I will hope in Him,” Job says (13:15). But hope is not inconsistent with complaint. In hope, “I will argue my ways to His face,” he immediately adds. Job argues with the Lord not in spite of hope, but because of hope. He’s like an attorney whose dream in life is to make an appearance before SCOTUS.

That’s remarkable enough, but then Job adds (v. 16): “This will be my salvation” ( hu-li lishuah ). That phrase could, and sometimes is, rendered as ” He will be my salvation.” That’s certainly possible, but even if that translation is preferred, Job moves directly from expressing his hope that he can prove himself before God to speaking of salvation.

The logic of the connection comes out in the following line: “For a godless man may not come before His presence” (v. 16). When Job is given an opportunity to defend himself right to Yahweh’s face, he will know he is saved, because only those whom God approves have the privilege of the floor.

He’s confident that, given the change, he could convince Yahweh: Salvation by argument. But the very fact of being allowed to argue is proof enough of being saved: Salvation as argument

November 28, 2012 Conform or Go Away
Browse Our Archives
Related posts from Leithart 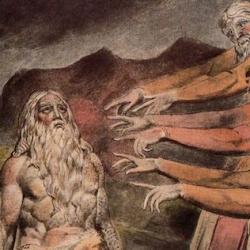